As with any benchmarking, you would expect the hardware to be pushed to its limits. When the GPU and CPU are under load in the MSI GS75 8SE, the cooling and fans kick into overtime. The noise is quite audible and could probably distract from whatever it is you are doing. Though if you are gaming and have a headset on, you might not notice when the fans kick in to help keep the laptop cool. Come to think of it, even though this computer is a laptop. You do not want to have it on your lap when you’re diving into Fortnite or editing and rendering videos. The heat from the bottom of the laptop would be most uncomfortable. Best to ensure the computer is on a solid surface with plenty of space for that hot air to escape.

The MSI GS75 Stealth 8SE is a gaming laptop, so how does it perform under some of the more popular games? Let’s take a peek!

I do not have a vast array of tricks when it comes to benchmarking gaming performance. I run the hardware through a variety of PC games and, of course, some of the standard DirectX 11 and DirectX 12 benchmarks. I know some people will overclock their components and then do some benchmarking to get the most out of their gear, but being a laptop and one on loan for the review, I will keep everything at stock settings.

First up, I took a look at how the MSI GS75 Stealth 8SE handled playing Fortnite. After all, Fortnite is what everybody plays these days, right? Okay, kidding aside, I’m not a big fan of Battle Royale games like Fortnite, but I did play a couple of rounds to see how well the frame rate handled the game on Ultra settings. 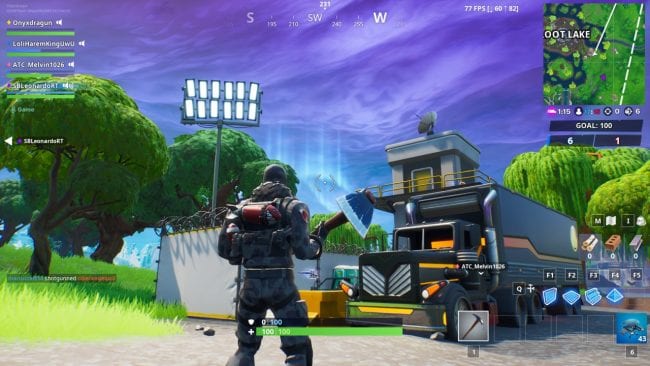 The GS75 Stealth 8SE was showing approximately 100 FPS while running around and collecting resources. The frame rate would drop when other players were visible, and depending on what was happening, the lowest I experienced the frame rate to drop was 40FPS, though that was very briefly. It would always recover and bounce around 70-60 when a lot of action was happening. The GS75 Stealth 8SE is easily capable of keeping up with what is going on in the middle of a Fortnite session. 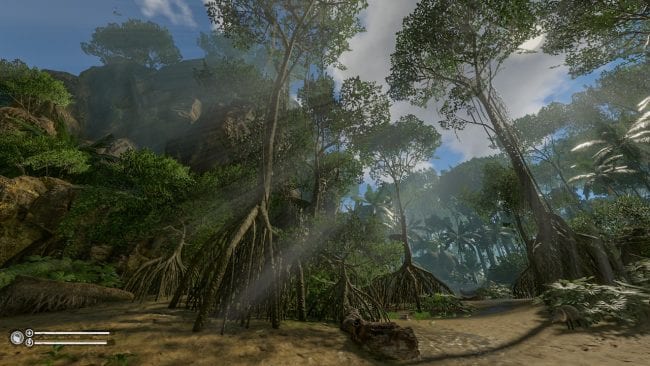 Next up, I loaded a quick game of Green Hell. Green Hell is a recent release of a single-player, sandbox survival game based in the jungles of the Amazon. I wanted to see how the RTX 2060 with its Ray Tracing would make the game look but also how it might handle running around the forest floor of the Amazon jungle, so I thought it might be a fun game to play that isn’t c. With Green Hell’s settings maxed out on High, running around the forest gave me around 60-70 FPS, rarely dipping below 60 FPS, so the game was playable on High graphics settings through the little time that I played. I’m sure the RTX 2060 helped make the environment look spectacular, and I am kind of sad that I will have to give the laptop back to MSI as I will miss making use of the RTX 2060 GPU. 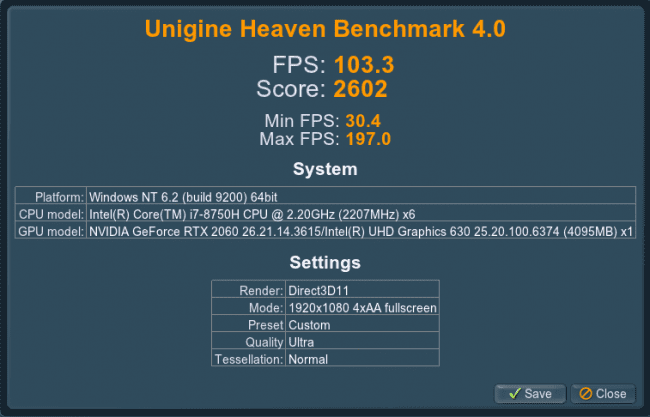 People still make use of Heaven and its DirectX 11 benchmarking ability. I had it run through the benchmark a couple of times just to let the machine warm up a bit and see if there was any thermal throttling. As you can see from the above screenshot from the final score was 2602 for the MSI GS75 Stealth 8SE with its NVIDIA RTX 2060. The GS75 Stealth 8SE was able to average 103.3 FPS, maxing out at 197.0 FPS and dipping way down to 30.4 FPS.

Next up was to put the GS75 Stealth through its paces with 3DMark’s TimeSpy. I also ran the TimeSpy benchmark a couple of times, especially after I updated the NVIDIA drivers to their lastest (435.15 at the time of this review). Updating the drivers improved the score by at least 500 points. For a gaming laptop that has not been overclocked, I think it did pretty good against similar laptops running similar GPUs, GPU core clocks.