Probably in an effort to bring a little innovation to the karaoke game genre, Lips offers a few things that are a little different. First, instead of “Star Power” or “Overdrive” like how you find the certain rhythm games, Lips has something called “Star Scream.” This works in a much the same way, except you have to make a certain movement with the motion-sensitive mic to activate it. To build up your meter for “Star Scream,” you can sing well or you can shake that microphone like a maraca. That’s right. It’s a noise maker and this builds up your meter as well. 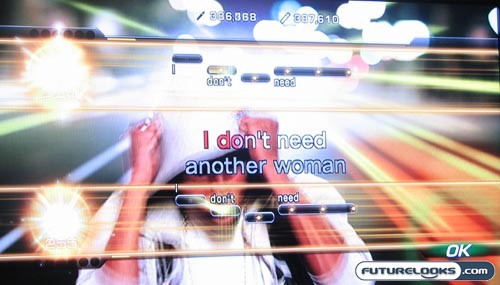 Other novelties include some of the slightly different game modes. There is a Kiss Mode where you sing co-operatively with a friend until the two on-screen characters pucker up. In Time Bomb mode, you have to make sure you sing well enough to douse the fuse. With Vocal Fighters, you face off against another singer for ear-piercing supremacy. These add a dash of freshness, but they’re not enough to make me go “wow” in any way.

Importing Your Own Music 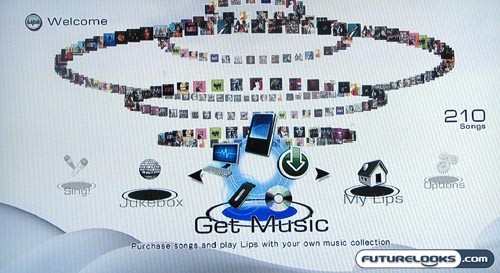 When I first heard about Lips for the Xbox 360, one of the features that really caught my attention was the ability to import your own DRM-free tracks. This sounded like a great way to circumvent the need for downloadable content, because if you already (legally) downloaded some music online, why can’t you use it in the game too.

My assumption was that this song import function would connect the Xbox 360 to some sort of server, grabbing lyrics if they were available through some kind of resource. You’d be able to sing along to these tracks just like the ones included with the game and this would easily overcome the shortcomings of the existing track list. Unfortunately, this dream is far from the truth.

Yes, you can import your own tracks, but there are incredibly severe limitations. You don’t get any lyrics, nor are there any lines produced to represent timing and pitch. You just blabber in the microphone in “freestyle mode” as your DRM-free MP3 plays in the background. The backdrop is some generic virtual music video. This is really not much better than singing in the shower, except only more embarrassing.