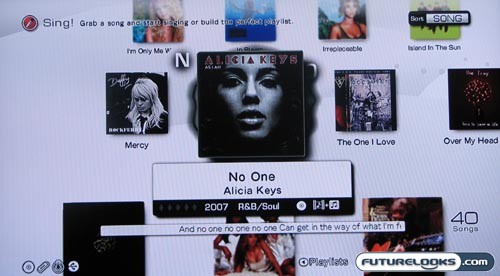 It seems that Lips for the Xbox 360 is trying to be all things to all people. While games like Rock Band focus mostly on the “rock” side of things, the track list for Lips is all over the map. You’ve got country, hip hop, pop, and even quirky songs from the 80s. I guess this goes with the karaoke theme, but this has to be one of the strangest track lists that I have ever seen in a music game.

To give you a sense of what to expect, here are a few of the songs featured in Lips:

If you have somewhat specific musical interests, you will only find a small handful of tracks that interest you. I have a burning suspicion that fans of Trace Adkins are probably not as inclined to sing Lip Gloss by Lil Mama. I could be wrong, but when there are only 40 tracks included with the game, you’re going to get tired of singing the same stuff over and over again. 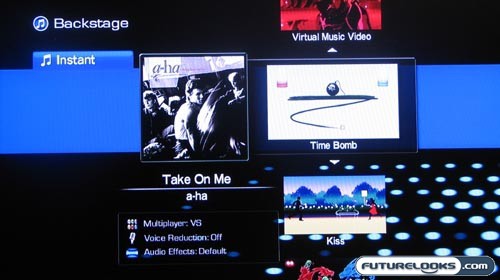 Yes, I realize that you can get more songs via the DLC route on Xbox Live Marketplace, but if the developers tossed in an extra 20 or songs as part of the disc, it would have made a world of difference.

Upon selecting any of the songs, you will be given the opportunity to choose your “backstage.” Probably the most popular choice would be the original music video (Take On Me is a classic!), but you can also choose a Virtual Music Video or some other game modes. 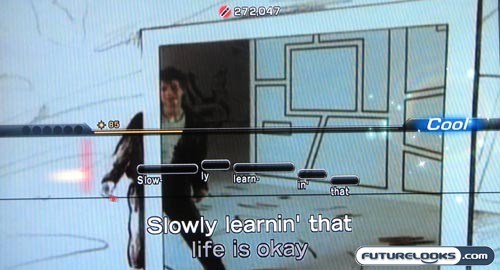 The gameplay itself will feel pretty familiar to anyone who has played any of these karaoke-style video games in the past. The lyrics appear on the screen, along with lines to indicate your target pitch and timing. Match them as best you can and you earn points.

It might be the competitive spirit in me, but I find it very strange that it is not possible to fail from any song. It doesn’t matter how bad you are or how off-key you happen to be singing, because they’ll let you get all the way to the end of the track regardless. There’s also no real sense of progress, because you don’t have to unlock any of the songs. They’re all available right off the bat.