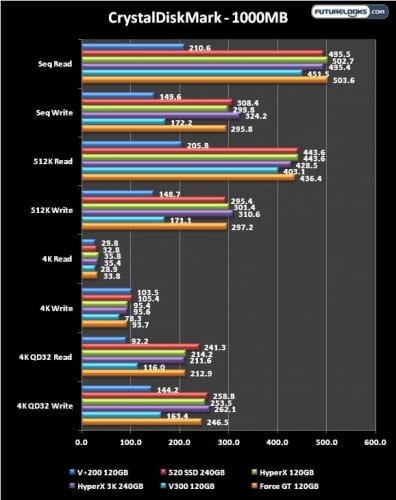 The 4K data block transfer rates are a little lower when handling this mean benchmark. The larger data block transfers are easier for the more expensive performance SSDs to handle usually. Still, the V300 is a good replacement for the lower priced SSDNow series. There’s no difference between the desktop and laptop SSD. However, my test laptop does score about 35% slower because it utilizes different a chipset than your typical desktop board of the same vintage. If you have a notebook, you may end up seeing about a 10-15% lower data scores than a desktop.

Even though the V300 desktop and notebook kits use identical SSDs, different types of computers use different types of integrated chipsets and controllers. I tested the V300 in the lab desktop PC and in my once slow notebook. The V300 improved laptop performance so much that it’s going to stay there alongside the old 500GB platter drive as a backup drive. 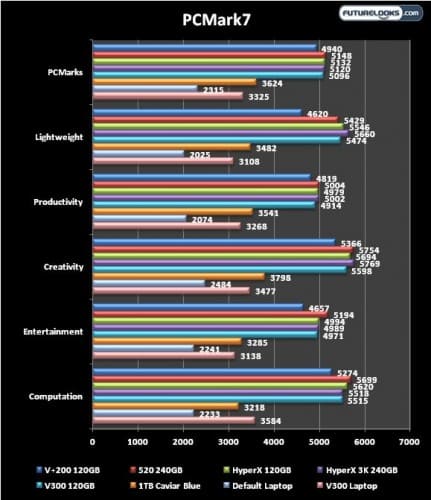 As you can see, almost any of the current desktop SSDs are faster than my best 1TB regular platter drive. The platter hard drive has moving parts that have to do a few things before data is transferred. SSDs do not. The V300 performs relatively well. Additionally, it transforms my notebook into what seems like a whole machine.

SSDs can change the interactive characteristics of your desktop or laptop. I performed a few timed tests to see how the desktop and notebook computers were improved by the V300. The laptop doesn’t have a very capable GPU but it can handle Diablo III.

After the time tests were complete, the Kingston V300 120GB helped shorten the time it takes for my desktop and laptop to complete tasks. Unfortunately, I couldn’t get Borderlands 2 to work properly but Diablo III gives us an idea of the benefits of the V300 none the less. If only an SSD could give my laptop another 20 frames per second. 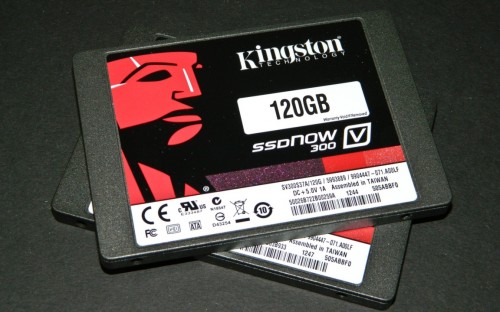 Solid State Drives are the inevitable direction of storage technology but adoption is still slow. For a few months there it looked like we were getting closer to .50 cents a GB but then prices went back up. I don’t think it’s all that influenced by the economy nearly as much as it is by the developing NAND and controller partners dragging their feet. Consumers want larger capacities and are willing to pay for it as long as they feel they’re getting their money’s worth. Everyone seems to get it but developing partners, even Kingston Technology, understands it takes more than just the SSD initials to interest consumers.

The Kingston V300 SSDNow series Upgrade Kits continue to be one of the driving top contenders especially in 120GB and 240GB capacities. Our as tested 120GB kits are relatively affordable at $115 – 137 US, and perform well for the price, definitely improve system performance overall and come with a very useful bundle which includes Acronis software plus the accessories  you need to make a migration. You can expect much shorter boot and program startup times not to mention a far more responsive system. Especially when it comes to adding a V300 to your notebook as a main drive upgrade.

Overall, the Kingston Technology V300 120GB upgrade kits for notebook and desktop get a solid recommendation from us.