Brand new SSDs always do great when you first get them. But as they get used, they start to show their limitations. If it truly can do the job for which it was intended, it’ll maintain some semblance of its out of the box performance.

After the SISOFT SANDRA tests were completed, the SSDs were loaded down to at least 75% and then some. These benchmarks should offer you a glimpse at each drive’s realistic performance and any limitations as each manages itself in regards to “drive cleaning” duties.

This test taxes the SSD’s overall performance using random and overlapped I/O requests. Think of it as one of the best all around benchmarks that summarizes all of its performance providing realistic and interpretable results. 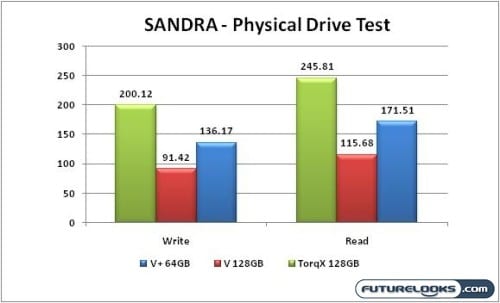 As you can see, there’s quite a bit of difference in both Read and Write transfer rates depending on each SSD’s memory controller. The TorqX (Indilinx) leads the pack, with the Value+ (Samsung) and Value (JMicron) SSDs following in order. Keep in mind that the larger 128GB Value+ SSD will afford another 10 MB/s in performance if it were here on the test bench.

Naturally, this test is all about the IOPs performance moving data in all different sizes of data blocks. The only thing that could be better about this benchmark is if we had two of each SSD. But, we won’t hold that against anyone. 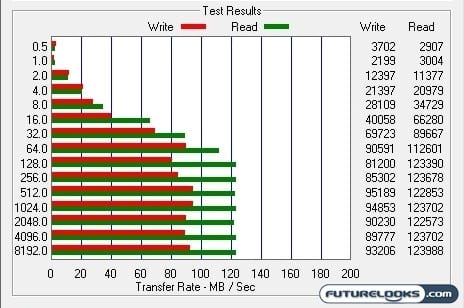 First, the 128GB Value SSD was tested. You’ve probably seen these results before, except the 4KB performance is probably a bit better. The updated firmware benefits the JMicron controller quite a bit. 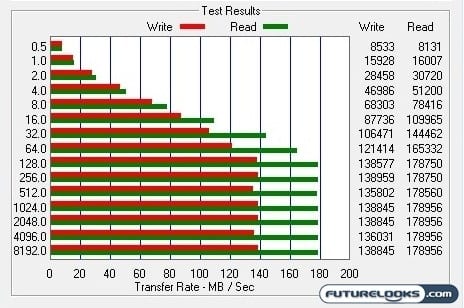 Here, you can see the 64GB Value+ SSD pretty much doubles 4 to 16KB data block performance. You sure notice the peformance when you start hosting or moving some small files around like document, website files and what not. These are respectable numbers all around. 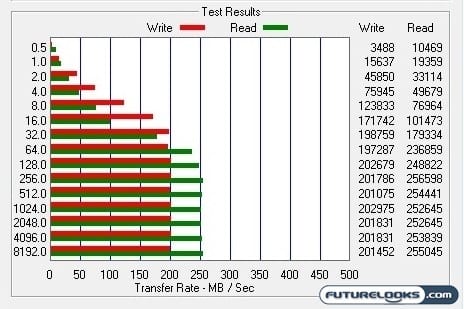 How does the SSDNow V+ and Value compare to an Indilinx controlled SSD? Well, they are not quite as fast, but they also don’t command the same price as the Indilinx equipped Patriot Memory TorqX. Again, you’ll really notice the benefits of these speeds as you start to move lots of data around.