Results of the Torture Test

So, how did it do? Check out the video to find out!

I was mildly concerned, not necessarily for the ioSafe SoloPro, but more for the safety of my home. The first fifteen minutes seemed to be going quite well, but then I started to smell something burning or melting. As I said in the video, it’s almost the same kind of smell that you get when you turn on a hairdryer, likely because it’s burning through some dust or something in the coils. And then, I think I discovered what was causing the smell. 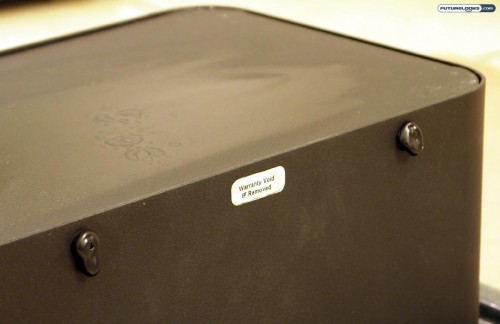 The rubberized feet in the base of the ioSafe had begun to melt. Interestingly, none of the labels look like they got scorched in any way, but the metal surface was easily hot enough to make some fresh margarine bubble on contact. After letting the product cool off overnight, I plugged it back into my computer and, sure enough, the pre-loaded video files still worked just fine. Everything loaded up as if it had not been tortured at all.

We may be returning to make a grill cheese sandwhich or at least fry an egg to make sure you keep an eye on our YouTube Channel for more fun.

But what if we put some actual numbers to this test? For that, we turned to CrystalDiskMark 3.0. The test rig used here comes powered by an AMD Phenom II X4 905E 2.5GHz, MSI 890GZN-G65 mATX motherboard, 4GB of DDR3 1866MHz RAM, Gigabyte HD 5770 SOC 1GB DDR5 GPU, and Windows 7 Professional 64-bit. For the sake of comparison, I decided to include the FreeAgent GoFlex USB 3.0 drive in this benchmark as well. 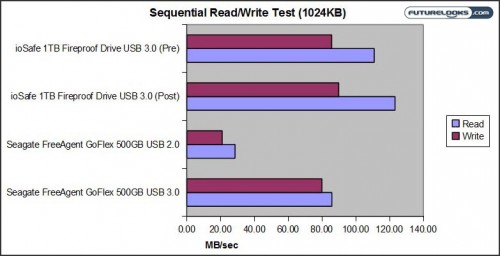 The performance level of the ioSafe before (pre) and after (post) the torture test is basically comparable. In fact, the resulting benchmark numbers actually improved after being cooked in the oven. The sequential read and write speeds (with 1000MB of data and 1024KB blocks) were recorded at 110.9MB/s and 85.71MB/s, respectively. Using the same test after the torture test resulted in speeds of 123.2MB/s and 89.86MB/s, respectively. It’s almost as if cooking it made it faster.

The Real Value of ioSafe

It’s easy enough to focus on the hardware and its relative performance, but that’s not the real “product” being offered by ioSafe. It’s just the tangible thing that’s serves as a talking point. The real product is the Disaster Recovery Service (DRS).

You get one year of DRS when you buy the SoloPro and then you can renew (for three or 5 years) after that. As long as you keep the service active, your data is safe and will be recovered by ioSafe should something happen to the drive. Regular data recovery services from competitors can cost $2500; with ioSafe, this cost is spread across all the customers, not unlike insurance, so there’s no hesitation on your part should something happen to your external drive. 5 year renewals start at around $100 US which gives you bumper to bumper coverage after the 1st year.

Be advised though that you have to buy the renewal before the 1 year is up. This prevents people from cooking it in an oven after the warranty is up and then claiming for out of warranty issues. 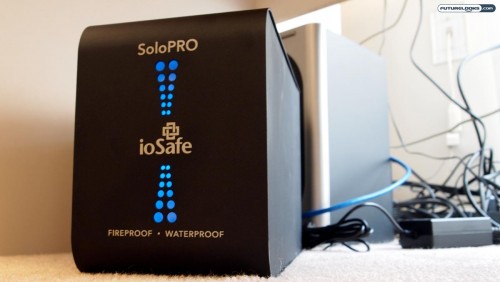 With a base price of $249 for the one-terabyte model with USB 3.0, the ioSafe SoloPro fireproof and waterproof external hard drive is certainly not the cheapest option on the block in terms of hardware. You can get a similarly sized and spec’d external hard drive for a fraction of the price. But that’s not the point of the ioSafe offer. Yes, it’s fast and capacious, but it’ll also be able to keep your data safe in case your home office goes burning into the ground. With the data recovery service, you’re even covered for up to $2,500 in case ioSafe can’t get your data back after a disaster. That’s some real peace of mind.

The ioSafe SoloPro certainly isn’t for everyone, but for the people who need this kind of protection, it really doesn’t get much tougher… unless you get the shockproof SSD model which will survive multiple shotgun blasts and being dragged behind a car. Do stay tuned to our YouTube Channel for that special video!