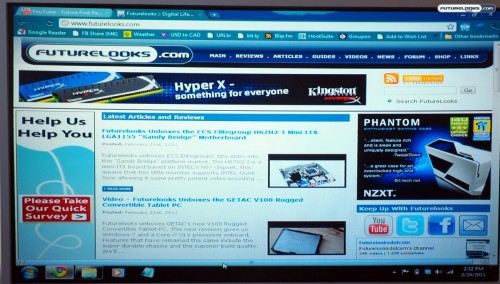 With the software finding the “optimal” resolution, I proceeded to test the wireless connection by surfing the Internet, playing a local video file, and streaming a video over YouTube. The first thing that hit me was the lag between what was shown on my laptop and what was shown on my HDTV.

Even scrolling through websites, I found that the TV was constantly trying to play catch-up. It’d always be a few split seconds behind. This isn’t terribly annoying when dealing something that is mostly static, like word processing, but it can be a pain for anything with more movement… like videos. 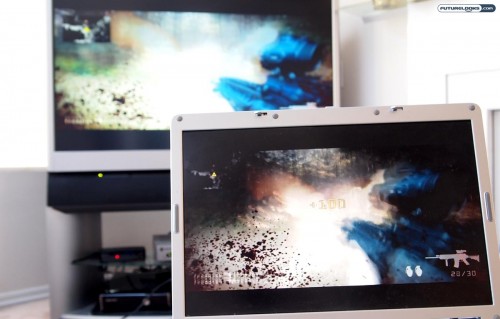 Playing a local standard-definition video through Windows Media Player, the lag was pronounced. I also noticed some severe issues with frame rate (not surprisingly), so this may not be the best solution when it comes to anything with too much movement.

Similarly, testing a 720p streaming video from YouTube (I used Freddie Wong’s Future First Person Shooter as the test) resulted in significant lag and frame rate concerns. The video was mildly watchable, I suppose, but it was anything but silky smooth. The good news is that the wireless audio did not appear to suffer from any noticeable lag or stuttering. It’s possible that this lowered level of performance is due to the weaker nature of my Dell laptop. It only has an Intel Core 2 Duo T5300 (1.73GHz) processor with 3GB or RAM on Windows 7 Home Premium. 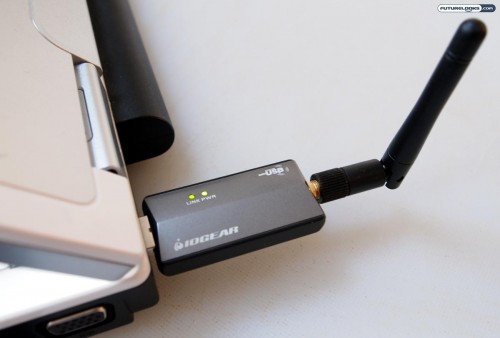 I had high hopes for the Iogear Wireless Audio-Video Kit. The GUWAVKIT looks so promising on paper, because it gives us another great opportunity to clear out unnecessary cable clutter. That’s on paper. In practice, it didn’t really live up to expectations on two very important fronts.

First, the software didn’t really work the way I thought it would in Windows XP and it failed to install DisplayLink in a Windows 7 environment. Considering that this is supposed to be seamless and easy, that can be a major hurdle for the average consumer. It is good that it worked out in the end, but some supplementary “help” material would have proven most useful.

Second, while audio performance was acceptable, video performance left something to be desired. It was able to play higher-resolution videos both in browser and in full-screen mode, but there was noticeable lag and frame rate concerns. Surfing the web is fine though, especially if you have a wireless desktop to go with it, but expect the TV part to be playing catch-up more often than not. 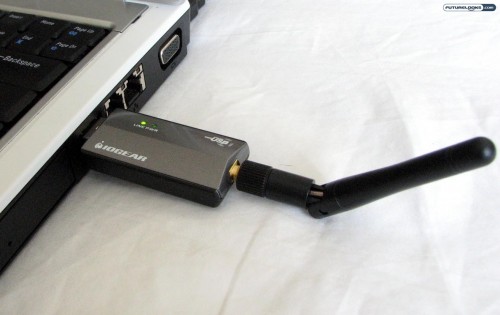 Considering that the Iogear GUWAVKIT is still listed at a cool $280, it is no small investment for someone who wants to cut some wires. If your intention is to watch your HD videos, both locally stored and online streams, you’re probably better off buying one of the many inexpensive media players out there. Granted, they don’t provide anything close to a true PC experience on the big screen, but they’re a heck of a lot easier to use and are considerably less expensive.

Even if Iogear were to reduce the price and send out some suitable firmware updates, the lack of HDMI and other options could prove to be problematic at best.