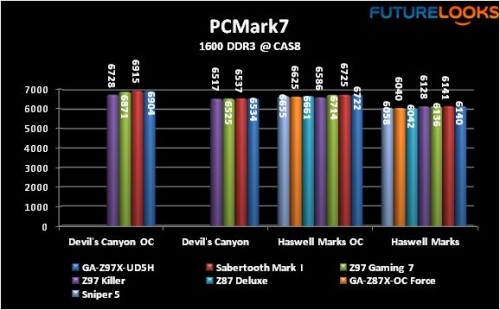 As expected, Devil’s Canyon does better on the Z97 due to its 4GHz base operating frequency which turbos upwards of 4.3GHz allowing better system performance. However, when the 4770K was used, the scores are also in favor of the Z97 versus the Z87. It’s not a lot but it’s something. If I were looking for a deal, I’d still grab a Z87 and Haswell processor which would likely be $100 or more cheaper. 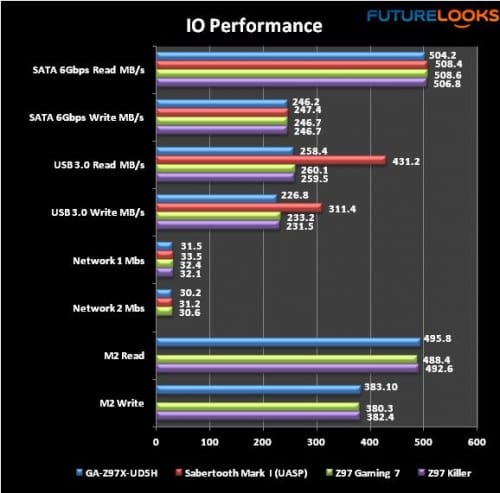 It’s business as usual. ASUS still has the handle on UASP support for USB 3.0 which is nice to have if you move a lot of media files stored on an external USB 3.0 storage device, or edit directly from a disk system. Otherwise, everything else is similar. Network speeds are within a few MB/s and SATA is still comparable. Unfortunately, we don’t have any newer SSDs to test the SATA Express ports. However, we did get a great little 120GB M.2 SSD from Kingston. This is about 80MB/s more than the mSATA we have on other Z87 and Z77 boards. 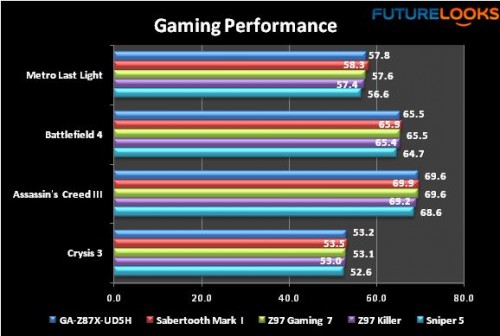 What I wanted to show you for gaming is that there isn’t really any performance gained. It’s all very close revealing most of the magic happens between the CPU and GPU. If you’re just looking to game, again, the Z87 and a Haswell will save you some money. Otherwise, you can overlock a bit to get a little more out of the frame rates. Overclocking is just a couple sections away.

RightMark Audio Analyser is used to evaluate each board’s audio implementation objectively. Even at 50% volume, all of today’s latest motherboards should be able to produce good if not excellent audio quality. This is where those extra capacitors and Op Amps make integrated audio shine. There really is no excuse for cutting corners to save a few bucks on audio. 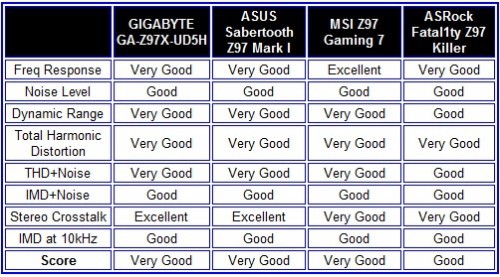 I can almost always correlate the results with actual human ear testing. With that in mind, the GA-Z97X-UD5H, Z97 Sabertooth Mark I, Z97 Gaming 7, and Fatal1ty Z97 Killer all produce decent analog audio quality. Noise is non existent and frequencies are very clear. However, the Z97 Killer wasn’t as loud or lively as the other three. In other words, you’re not going to be pushing any ear drums or shaking any walls unless you plug the system into a powered headset or speaker set. But it is also the least expensive of the bunch.

Auto overclocking has been one of my favorite features since Z77. The feature is built into GIGABYTE Easy Tune, ASUS AI Suite 3, MSI Command Center, and ASRock F-Stream Tuning utilities. Each board was tested using auto, manual, and preset overclocking settings using the Core i7-4790K processor. A maximum load temperature of 80C and 1.4 volts was defined as we don’t recommend anyone running it hotter or else your CPU will eventually stop working. Turbo was disabled as well. Your results will depend heavily on the CPU cooler but also BIOS tuning.

Both the GA-Z97X-UD5H and Sabertooth Mark I seemed to be cut from the same cloth and delivered great results.  The platforms are very quick to apply the preset overclocks and more importantly, both were very stable. The Z97 Gaming 7 was just a slight bit unstable at 4.7GHz but did better when manually overclocked. While not stable with the preset, manual 4.6GHz was stable.

Bringing up the rear, the Fatal1ty Z97 Killer doesn’t have the VREG to support all those BIOS and software overclocking options. Unfortunately, auto tuning was less than “killer” as it stopped short of the processor’s max Turbo option and stopped short of 4.6GHz no matter how much voltage was pushed. This board seems at its best when running on stock settings. 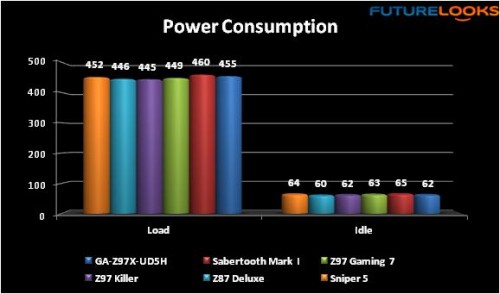 Boards with more components almost always consume more power. The one thing I really like about the last two generations is the very low consumption levels at idle. No, this is not in sleep or hibernation mode. The Sabertooth Z97 Mark I and older GIGABYTE Sniper 5 (Z87) are the hungriest by only a few watts, for comparison. Otherwise, you can expect similar consumption between all Intel Z97, NVIDIA GTX 770, and Intel Core i7-4770K or 4790K, based systems.

Now that all the testing is done, it’s time to quantify and conclude!