The Intel 5th Generation Broadwell processors are supported by the Z97 chipset and therefore any motherboards that support it. Since we’ve tested many of them, you can expect a solid response from your existing or new board. Just make sure the BIOS is updated first before sliding in the new upgrade. As for the upcoming 6th generation Intel motherboards launching in the new few days, those are designed to support the upcoming Skylake processor, which uses a different socket. More on that when we take the wraps off our upcoming coverage.

The Cost of Broadwell 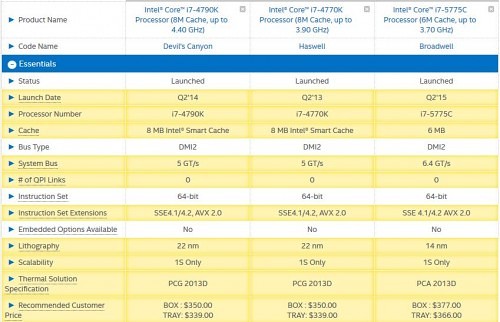 The Intel Core i7-5775C Broadwell processor is going to ship with a $377 US price tag. Obviously, that means you’ll need to spend a bit more than its blazing fast cousin the Core i7-4790K. Granted, it’s prepared to support 6.4 GT/s (Gigatexels/second) suggesting it has something more to offer than just power savings. This leaves us wondering whether or not the CPU performs better in some aspects to warrant the extra cost. 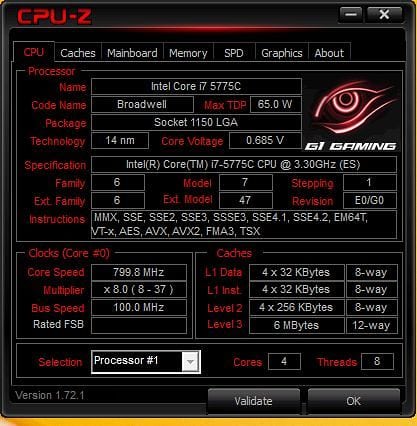 You’ll most assuredly need to upgrade your Z97 based board’s BIOS to run Broadwell. This can be quite frustrating for consumers who buy a board from old stock, along with a shiny new Broadwell CPU. However, if you are upgrading from an existing board, keep your old chip plugged in, and hit up your motherboard maker for a new BIOS on their support page. At least GIGABYTE, ASROCK and ASUS have pledged support for this chip with BIOS ready to go.

Here’s our test system setup for this review.

After updating, the settings were available for XMP profiles. As of this edit, nothing has been added to the product support page. But we have no doubt a better BIOS should be up soon for Broadwell.