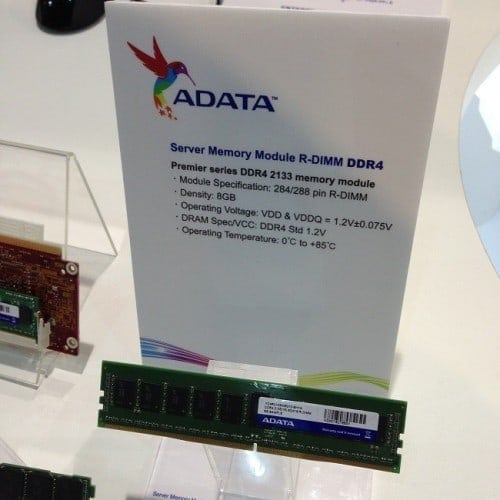 Just because Intel Developer Forum (IDF) isn’t over, doesn’t mean the news stops flowing. It seems this past week at IDF 2013 was all about the memory. First Kingston was spotted showing off DDR4 memory for servers. Now ADATA gets the spotlight to show off their DDR4 memory modules too.

As with other brands, ADATA will be starting with ECC server RAM with moderate speeds, but huge performance gains. The current DDR4 RAM will be available up to 2133 MHz with a transfer rate up to 3.2 Gbps at just 1.2 volts. This will put these modules at a voltages well below even low voltage DDR3 RAM which works at around 1.35 volts. The target audience will be pleased as this will lead to lower energy costs and larger scale without giving up any performance.

The obvious next step is for ADATA to prepare this RAM for the commercial market. For that, we all want them to crank up the voltage and the speeds. But the question will be, when will the motherboards show up?

No dates or shipping prices were revealed but expect that information to come forward as the motherboard launches near.

World-leading solution for next generation servers

September 10, 2013 – ADATA™ Technology, a leading manufacturer of high-performance DRAM modules and NAND Flash storage application products, announced today that the company’s new generation DDR4 SDRAM modules will be on display at the Intel Developer Forum 2013 (IDF13), held this year in San Francisco. Targeting server and render farm applications, the new DDR4 modules show that ADATA is once again at the front of the pack in providing new high-performance solutions to the enterprise market.

DDR4 SDRAM stands for double data rate fourth generation synchronous dynamic random-access memory, and its most notable features are faster clock frequencies and data transfer rates as compared to DDR3, as well as low power consumption. Running at just 1.2 volts, these new modules are expected to achieve transfer rates of 3.2 Gbps, at frequencies as high as 2133 MHz, far outstripping the capabilities of previous generations of DRAM. In large-scale server applications, the advantages of DDR4 will lead to lower costs and greatly improved overall system performance.

The new DDR4 SDRAM modules will be showcased along with the company’s other premium memory solutions at booth number 554 at IDF13.