At first glance, this is anything but a budget looking motherboard. Several years ago, this would have been considered an extremely well themed motherboard. And what’s true then carries over to now. 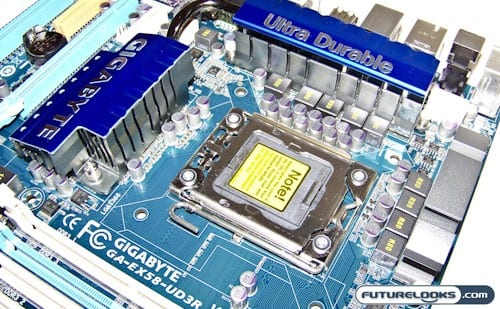 Here, we have nicely packed X58 motherboard blue PCB tailored to match some blue heat pipe capped sinks connecting the chipset and voltage regulators. The chipset/VREG sinks really physically stand out most on the motherboard. Each cap is made from blue anodized aluminum. Below these, you can see charcoal gray aluminum sinks that cool the VREG and PWM circuits. These are quite large aggressive looking sinks, not to mention really cool. You don’t often see these unless there’s potential.

It’s nice to see GIGABYTE do away with the mismatched DIMM and PCI slots. The slots are closer to the theme of the board and blend much better. Even the light orange slot doesn’t do much to disturb the presentation. The overall balanced theme shows that GIGABYTE is listening to the suggestions of their users.

Everything seems well placed and shouldn’t get in the way of any peripherals especially with the horizontal SATA ports. The largest video cards shouldn’t have a problem mounting since the cables feed off the back rather than straight up off the board. There are also a couple of legacy IDE and FDD slots on the board.

There really isn’t much reason to continue using old IDE drives except for external storage.  About the only purpose these serve anymore is to help the upgrade process go a little easier for those on older drives. Just connect your old drive long enough to copy over your data to a new SATA II hard drive. 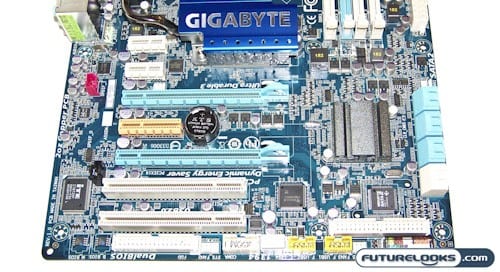 The PCI Express slots are close enough together that it’s very possible large video cards may touch. Some have back plates or are completely enclosed by the heat sink shrouds which require a little extra space. However, there aren’t any fully enclosed ATI video cards that come to mind. But, there are aftermarket coolers that could cause issues that do have large back plates.

Speaking of video cards, there are two versions of this board available if you’re wondering whether or not this X58 platform also supports SLI. This one obviously supports Crossfire only, but there is a UD3R-SLI model available for nVidia users. Just make sure you pick the correct board for your fiendish graphic needs. 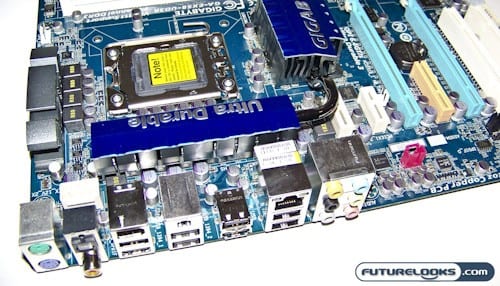 There appears to be plenty of USB 2.0 ports by default. Naturally, you have the legacy PS2 ports for those still insistent on using old school mice and keyboards. Some makers have done away with these ancient ports and offer only extra USB. Some of the other I/O features include Firewire, eSATA, HD audio, Gigabit LAN, Optical, and Coaxial Audio out ports.

One of the nice things about GIGABYTE as of late is that their boards have played well with any of the test bench USB Hubs. Of course, it really helps if you spend a little more for a decent HUB rather than some generic version. You will often find every USB port in use during testing which better tests the platform’s resolve, so to speak.

Since GIGABYTE turned the talent up at their facilities, their platforms have played very well with other hardware. This includes the 7.1 HD audio. They expect better from the audio Codec makers which is finally carrying over to their platforms. It might not be the highest quality audio you’re accustomed to in an aftermarket audio card, but it’s definitely more capable than you’d expect.