Search
Home
Reviews
Prev2 of 9Next

First Impressions of the GIGABYTE EX58-Extreme 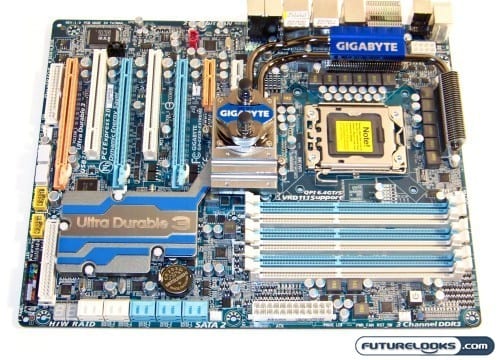 GIGABYTE’s new look continues to improve and this board is no exception. There are no more pastel colored ports, slots, or connectors in their new hip style (save the single light orange PCI Express slot at the bottom). They haven’t quite made any moves to black, red, or white PCB, but they’re close. Rich colored PCBs are apparently more expensive to make, thus driving up the cost of the end product. At least the board’s theme is consistent. 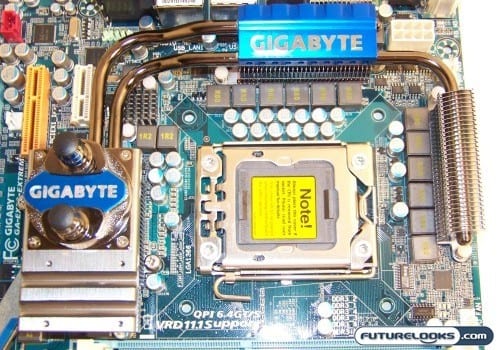 The board is covered with some very aggressive heat pipe cooling. Gun metal gray heat sinks cover all the components that tend to get hot during “extreme operations” such as overclocking. That’s why there are two capped ports on the chipset heat sink which double as a “chipset water block” to help curb extreme temperatures. Fittngs are a standard 3/8 ID (internal dimension) barb so it’ll work with the most common water cooling systems. 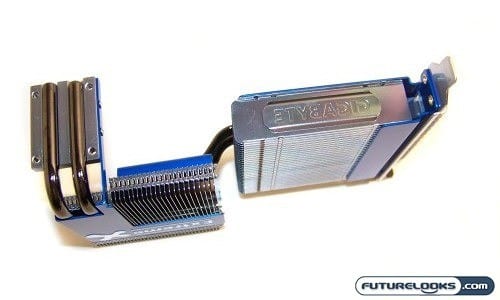 GIGABYTE includes an optional Passive Heat Pipe Chipset Cooler that comes neatly packed. It’s designed to add some additional cooling to the chipset if you’re not up to speed on water cooling. Even though the heat pipe heat sink is massive, it’s still surprisingly light weight. Its design allows the base and heat pipes to seat on top the board mounted heat sink. 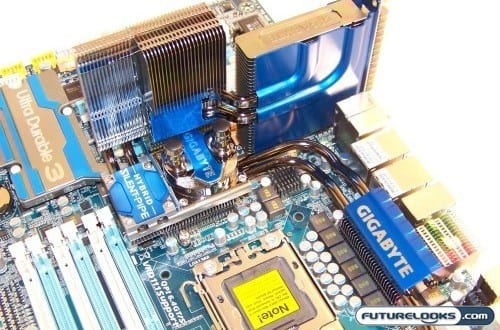 Granted, water cooling tends to look extremely cool if configured correctly. But, as you can see, the heat sink doesn’t look bad at all. It’s just slim enough that it won’t encroach on the video card too much and it blends in with the theme very well. Personally, I just love a well thought out cooling concept that works.