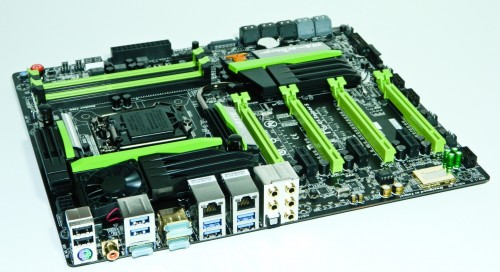 Now, we get to ogle at the G1-Killer Sniper 5 with its optional water cooled green and black heat sinks and shiny heat pipe. And, how can you miss the G1-Killer labeled heat sink with the gold skull? This board is designed to stand out. Especially if you decide to install between 2 – 4 GIGABYTE GTX 770 4GB OC WindForce3X video cards.

There are power, reset, and CMOS buttons near the DIMM slots which support DDR3 modules up to 3000MHz, overclocked of course. The board has ten SATA3 ports with four tied to a Marvell 88SE9230 controller and six connected to the Z87 Express Chipset. An extra auxiliary SATA power-in port helps feed extra power to the PCI Express slots in case you pack them with more than two extremely power hungry video cards.

If you recall from the video, it’s easy to see the green line in the PCB that separates every audio component as well as the audio-out port from the rest of the board to eliminate EMF or signal leakage. 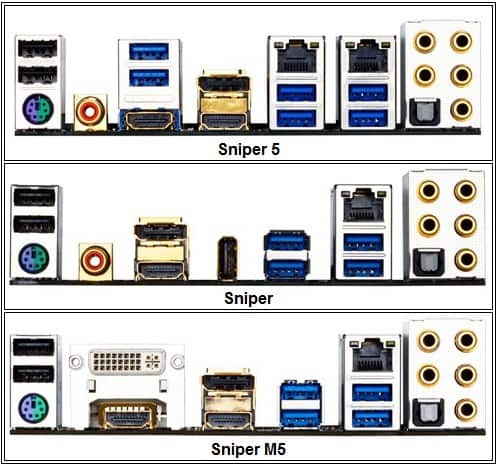 At a glance, the IO is pretty straight forward between the boards. All three boards have the same USB/PS2, RCA output, audio ports, and Qualcomm Atheros Killer E2201 network controller. They also include two HDMI and one Display port as well. The G1-Killer Sniper 5 naturally offers the most ports. In fact, there are 8 USB ports: 2 USB 2.0 provided by the chipset and 6 USB 3.0 via the Renesas 72x controller hub integrated in to the board.

When assembling the test systems, a familiar dilemma arose. Waging specialized gaming or overclocking motherboards against channel motherboards is kind of like comparing a 2014 BMW M4 and Kia Optima. While both offer similar functionality and features, it’s not the same experience. Motherboard manufacturers put their best resources in to creating flagship platforms like the GIGABYTE G1-Killer or ASUS ROG. So, keep that in mind while reading on.

In future reviews, we will be switching to be quiet! coolers and power supplies in our verified test benches. But these changes should not have a dramatic effect on performance.

Some of the boards have had a revision BIOS or two released since we started testing. Most of the updates were compatibility updates that should not increase performance. However, about a thousand variables are always present so each is running the latest available and could vary depending on the users’ configuration of course.

Assembly and setup went very smooth on the G1-Killer Sniper 5. However, the Easy Tune app encountered an issue at the end of testing when updating the program. Something corrupted during the uninstall-update process and the program wouldn’t work any longer. It’s the first time it happened in a long line of testing so this is most likely a random glitch. I advise you uninstall Easy Tune and reinstall a new version than updating. 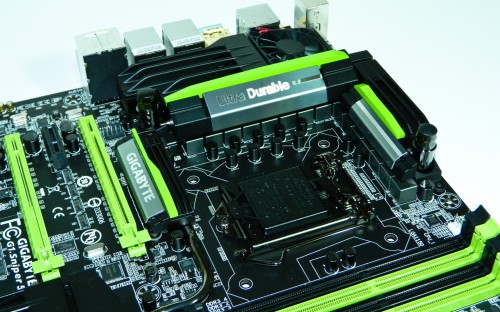 To best test the GIGABYTE G1-Killer Sniper 5, we put it up against upper echelon boards that have seen action in the lab. Hopefully, we’ll have the ASUS ROG Maximum VI to add to the mix soon. Our benchmarks focused on power consumption, audio, gaming performance, overclocking, and overall quality. Overclocking isn’t a common gamer task but we’re adding it as part of the tests as it does go hand in hand with stability and quality overall. If something is to break, it should break here so we know what to warn users about. Lets check out the BIOS really quick.

Essentially, the G1 Killer Z87 series BIOS are all very similar in layout compared to the rest of the channel boards. Most of the tuning magic happens in the first couple pages. Some settings have to be turned on before applying though, but once done, let the magic begin.

Overclocking can be done manually or by using automated settings. The G1-Killer Sniper 5 pushed the Core i7-4770K easily to 4.7GHz using ample CPU cooling provided by our NZXT Kraken X60. At this point, the CPU approaches 90C under a true full load which I professionally do not recommend under constant use. As always, 4.5GHz is easily manageable for high performance coolers.

With that out of the way, let’s get on with the benchmarks!