The current BIOS “F6” on the GIGABYTE 990FXA-UD5 is the same tried and true BIOS used for years. Just download the manual from GIGABYTE and you’ll see. It’s better than trying to stare at pictures we’ve taken of the screen. As the 900 series chipset is largely unchanged when compared to the 800 series, there is simply little to change in the way of user features. While the background initialization done by the AGESA (AMD Generic Encapsulated Software Architecture) and power management which is very similar to the Phenom II Thuban processors.

You have the options to disable any integrated feature such as the USB 3.0 controller, additional SATA controller, Realtek HD audio, or even individual integer cores on an FX processor. I love having final say about what does and does not initialize with the start of my system.

Overclocking with the GIGABYTE 990FXA-UD5 is very open ended. You have the options available to overclock the FSB or the multipliers. You just have to be sure you are providing enough voltage to the Northbridge, CPU, and HyperTransport to ensure stability.

Since we covered overclocking in great detail in part one and part two of our AMD FX launch article, we’ll just quickly summarize our findings. With the components above, I was able to use the CPU multiplier to get the FX-8150 up to 4.74 GHz. This did require disabling Turbo and increasing the voltages a little. With the CPU at stock settings I was about to get the FSB up to 236 MHz (200 MHz being default). Above 230 MHz, the UD5 locks the multiplier for the CPU, Northbridge, and HyperTransport to set minimums. I believe this is to ensure these components can keep up with the rate of speed the FSB is set to as other parts are affected by the FSB speed.

Everything considered, I found the overclocking on the UD5 to be simple and straight forward. Whenever the board was unstable, it would simply boot the default settings with no need to worry with reset jumpers or leaving my case open. Add in the option to save up to 6 different BIOS profiles and you can’t go wrong here.

Now on with the testing!

Once again, PCMark07 tests your entire system as it responses to a battery of test. These test are run three times to ensure accuracy, though hiccups do occur. While the motherboard is not directly being tested here, it handles all connectivity and can greatly affect the performance of components installed in your system. 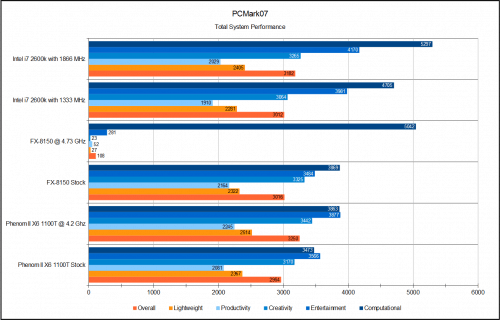 Not all of these test are mutli-threaded where the FX-8150 has an advantage. Entertainment and lightweight testing are single threaded tests. While the Phenom II 1100T should have a hefty advantage here, the 990FXA-UD5 keeps things very close compared to its 890FXA-UD5 counterpart.

To elaborate on why I believe the 990FXA-UD5 has better I/O, lets compare the raw performance of the two CPUs being tested with Cinebench 11.5. 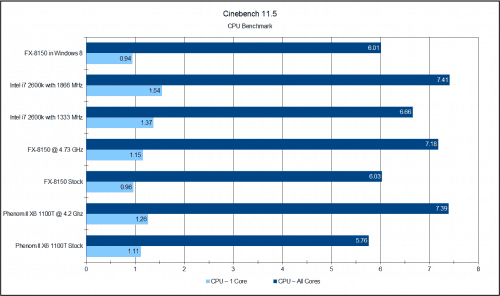 As you can see the 1100T should have a 13.5% advantage in single thread application. An advantage it did not seem to have in the PCMark11 test. Please keep in mind that memory bandwidth could also be a factor here, so lets look at actual I/O Performance.

In these test I used CrystalDiskMark 3 to get the best average performance score in several I/O throughput tests. Since these test are not CPU limited, I am comparing the 990FXA-UD5 to the GIGABYTE A75M-UD2H FM1 socket motherboard. The way I can keep the memory speeds the same and with similar memory controllers to minimize the number of variables affecting performance. 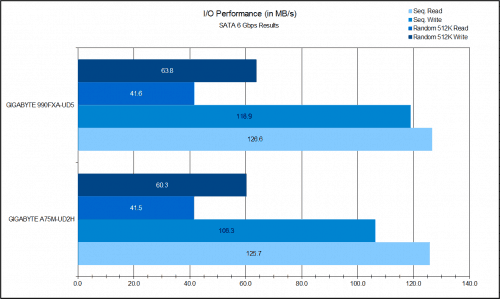 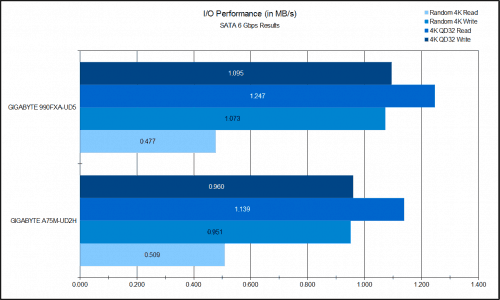 The GIGABYTe 990FXA-UD5 maintains better throughput in every test except for Random 4K Reads. The biggest improvement is in Sequential Write performance.

Now lets take a look at performance for USB 2.0 and USB 3.0. The USB 2.0 will be limited by the connection while USB 3.0 should only be limited by the device I use. If all is well, the USB 3.0 results should be very similar to the SATA test results. 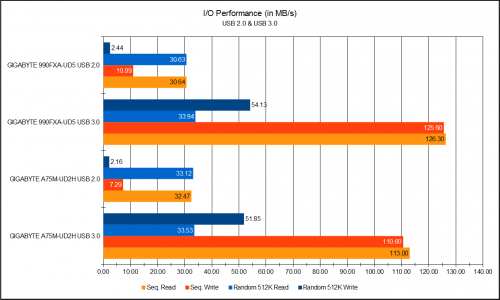 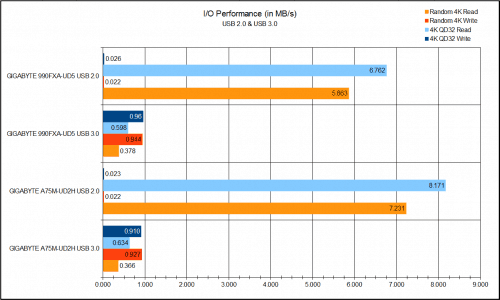 The UD5 maintains its marginal leads as in most tests here. There is a huge improvements in sequential reads and writes. In the second chart though the GIGABYTE 990FXA-UD5 falls behind in both 4K random read tests. This is consistent with the SATA results. While it has a solid performance overall when compared to its FM1 socket cousin, the UD5 I/O seems to struggle with random reads which could be driver related or something else which we may look into.

Next, let’s see how the graphics performance measures out on this board then take it home with our final thoughts!