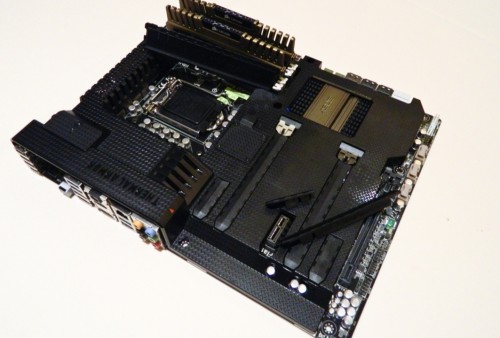 Unique to the ASUS brand, the Sabertooth series returns with some new updates to the TUF jacket, or reactive armor, or whatever you choose to call it. There are vent channels cut in to the TUF layer to allow air to hit the PWM circuitry. Two small 30mm fans will now ship with the board to help keep air moving underneath. With this comes improved Thermal Radar software for full fan control, sensor and voltage reporting. Yes, Fan Expert2 is also part of the Sabertooth’s arsenal.

Matching DIMM and PCI covers also come with the board to keep your slots from getting covered in dust. They also give your board a more refined look when you don’t need them. It almost looks like the engine bay of a high end European vehicle. Last but not least, the included DIMM slot cover also doubles as a tool for releasing the PCIE 3.0 slot locking mechanism. This will save you time digging around for something to remove your cards with. 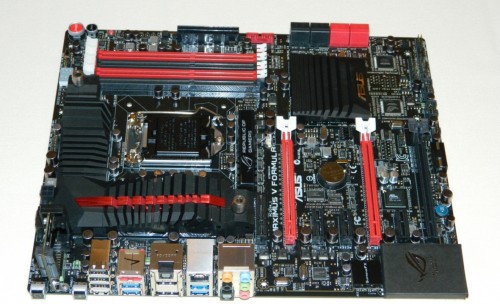 The enthusiast ROG series continues its reign of gaming and overclocking terror. Only PLX Gen 3 controllers are found here to ensure full PCIE 3.0 device compatibility. LN2 switching unlocks all the extra BIOS potential should you feel inclined to conduct some sub-zero overclocking. We have heard that Intel’s 3rd generation processors are able to hit 7GHz with the right board and ROG boards have always been a little more right than wrong.

Additional features that you’ll want to find out about include…

1. Users can utilize the IGPU to give their single graphics card a little boost in performance since we all can’t afford the best cards. Free up your graphics card if you’d like to use the IGPU through LucidLogix Virtu HDMI video out.

2. The ROG boards now come with a dual PCIE module that mounts near the IO ports. Users can add an mSATA SSD, Wi-Fi adapter or mini TV-Tuner. This is the current pinnacle of connectivity in features.

3. The full sized ROG Extreme comes with a VRM heat sink that can be cooled using liquid or regular air. It just adds another level of cooling options should you want to customize your system further.

4. The UEFI ROG BIOS gets some updates that improve CPU VTT, Bus Clock (BCLK) tuning and Memory/CPU voltage control. You can bet one of these boards will be at the next big event overclocking under LN2 under efforts to break some records. 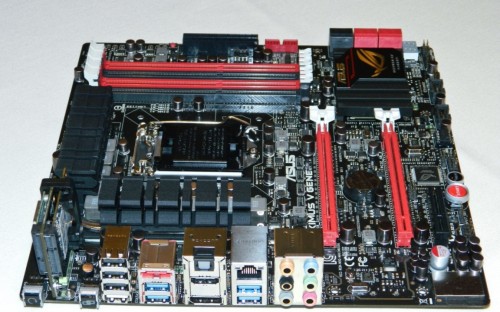 ROG boards appear to have dropped Creative Labs X-Fi audio for something new. The Maximus V GENE (m-ATX) uses the Supreme FX III audio codec which does quite well with proper implementation. Since ASUS has repeatedly reiterated that audio has been retraced using their new Audio MOAT technology, it should do well. It basically puts the whole audio section on another PCB layer to improve audio quality.

So what do you think ASUS replaced the Creative Labs X-Fi audio with? We’re completely guessing here, but we think the Formula or Extreme boards will offer an audio solution that finally uses ASUS Xonar technology. If so, that will make for one excellent audio experience. Our experience with ASUS Xonar has always been an extremely pleasant surprise! 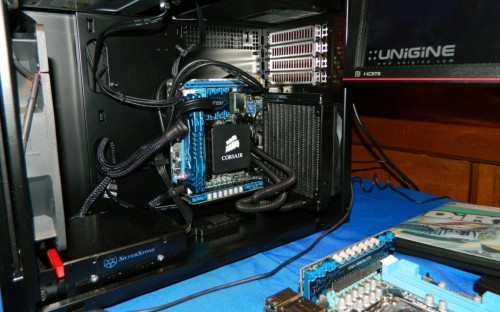 Don’t let the board’s size fool you! It offers many of the same features that full sized ATX channel boards have, but just a slightly shorter list of them. The demo system shown above actually had an mSATA SSD installed in the mini-PCIE slot. Again, this adds a noticeable performance boost over a standard platter based hard drive. When equipped with the right CPU and video card, there’s no game this little system can’t handle. But of course we don’t know that yet because official benchmarks have not surfaced. 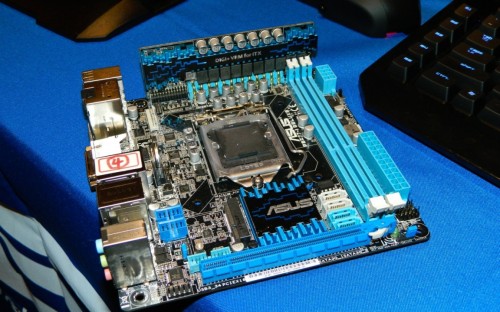 That tall hard wired module to the side boasts a rather stout DIGI+VRM vertically integrated on to the top end of the board to feed the processor more reliable power. In fact, it’ll overclock any 2nd and 3rd Generation Core Series processor, likely slapping any current system on the market silly. It might just be too much board for us, making you want it even more.

It’s been argued that the Z68 was ASUS’ best mainstream motherboad series ever designed. While many of us at Futurelooks have our favorites in the ASUS line up, we are always curious as to what our readers think about these new Intel Z77 series motherboards. Are they exceeding your wildest dreams? Will you be hanging on to that Z68 or even P67 motherboard just a bit longer? Or is something still missing from ASUS and Intel’s latest and greatest? We’d like to hear from you and I’m sure ASUS would too!

Till we release our findings on the latest Z77 series, feel from to drop a comment or two below and let us know what you think. You never know who might be stopping by to listen and you don’t get if you don’t ask. Stay tuned for more previews as we prepare to welcome Intel’s latest and greatest!