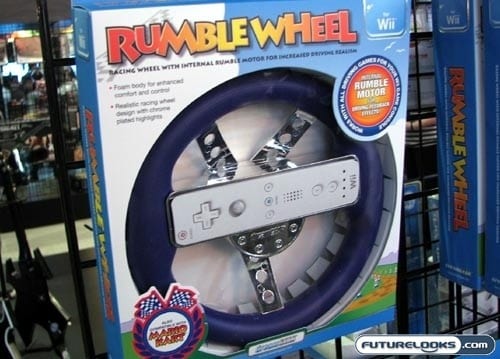 Did you enjoy the Wii Wheel that came bundled with Mario Kart Wii? Wouldn’t it be nice if there was a little more to that plastic shell of a steering wheel? Dreamgear thought so too, so they created the Rumble Wheel.

This racing wheel attachment for the Nintendo Wii features its own rumble motors, offering “realistic driving effects” when you hit the virtual road on the Wii. As you may recall, Dreamgear is the same company that created the Rumble Blaster gun for the Wii. I guess they like that vibration. 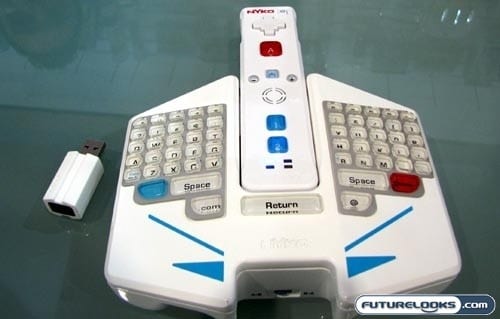 I remember when the Opera Browser was first released on the Nintendo Wii many moons ago and how I thought it was cool how I could seamlessly surf the web on my TV. That’s all well and good, but the on-screen keyboard was a huge pain in the butt.

Nyko has a reputation for being a little quirky and they’re maintaining this rep with the announcement of the Nyko Type Pad Pro. While it may look like it belongs with Starfleet Academy, this is actually a QWERTY keyboard attachment for the Wii Remote (or Nyko’s Wand equivalent).

You get a split-QWERTY keyboard, while the A and B buttons are mapped as trigger buttons on the handheld. There is a switch near the front where you can swap the A and B buttons. The Type Pad Pro is certainly unique in its design and that’s quite the understatement. It’s listed at $19.99. 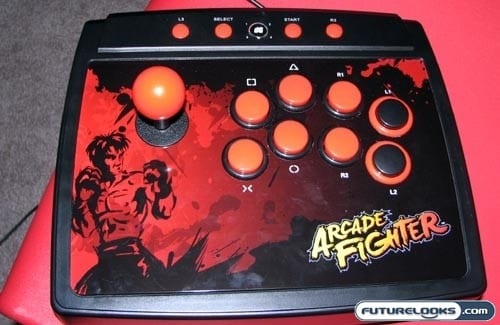 I like fighting games and there’s something to be said about bringing the arcade fighting game experience into your living room. We’ve already seen the FightStick line from Mad Catz, but they’re not the only game in town.

Dreamgear is jumping into the fray with the Arcade Fighter. This high quality arcade stick features eight face buttons and a standard eight-way joystick. The Wii version comes in a blue and white color scheme, whereas the PS3 version is red and black. There is no Xbox 360 version for now, but Dreamgear is always working on getting that license too. Microsoft has always been tough on third-party accessories.

The Arcade Fighter, as you can imagine, has been designed largely for 2D fighting games like Street Fighter IV, but you can use it for other titles too. In addition to the Arcade Fighter, Dreamgear also has the smaller Arcade Fighter Micro and the gamepad-style Arcade Fighter Classic Pad, the latter of which features six face buttons like the Mad Catz FightPad.

The Dreamgear Arcade Fighter for PS3 is $59.99. I’d imagine that the Wii version will be priced similarly.