Harmonix isn’t the only one doing the rhythm game thing, of course. A smaller operation called Seven45 Studios has produced a new game called Power Gig: Rise of the Sixstring. The core gameplay will be familiar — hitting colored notes in time with the music — but there are two notable differences. 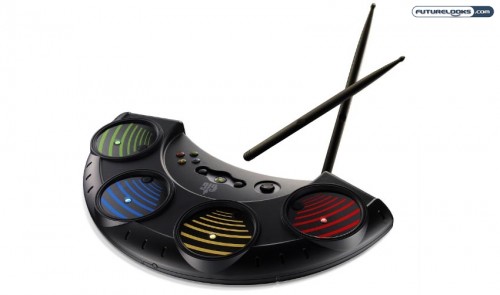 First, it makes use of an “AirStrike” drum kit. This is placed on the ground and looks like the regular Rock Band set, except it creates virtual cylinders extending upward above each pad.

You don’t actually hit the pads themselves with the drum sticks; you just strike downward within the cylinder. I found this to be a little unintuitive, since you’re not looking at the LED feedback on the pad while playing the game. 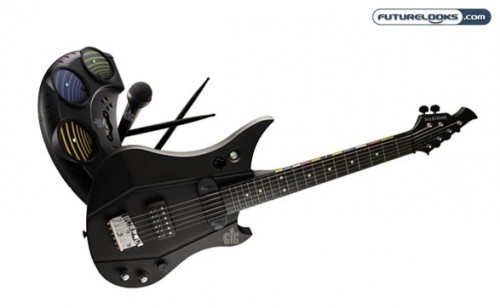 The other difference is that this game uses a real electric guitar known as the SixString guitar controller. You don’t push plastic fret buttons; you hold down actual strings. You don’t hammer on a plastic strum bar; you use a real pick on a real guitar string.

Expect Power Gig: Rise of the SixString to launch on both the Xbox 360 and Sony PlayStation 3 this fall. Since it comes with a real guitar, it is decidedly more expensive than its plastic counterparts. The game+guitar kit for the Xbox 360, for instance, is currently listed at $179.99.

I was definitely a little confused when this press release and invitation came through to my email inbox. YooStar2 by YooStar Entertainment is marketed as the world’s first movie karaoke game. 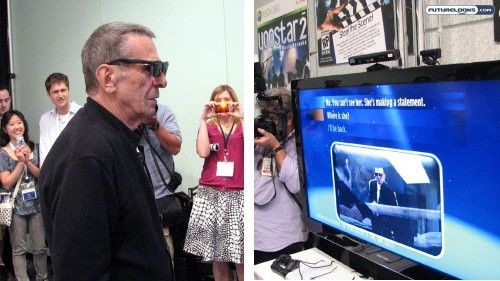 Based on that description, I thought you’d sing movie theme songs in a Sing It or Karaoke Revolution kind of manner. Then, I saw that Leonard Nimoy would be giving live demonstrations in an E3 meeting room. Intrigued, I lined up for an hour to meet Mr. Spock.

As it turns out, YooStar2 lets you recreate &lt;em&gt;scenes&lt;/em&gt; from different movies, reciting lines from the script as the Xbox 360 Kinect records a video of your acting prowess. On the PS3, the PS Move records your gestures.

You are then inserted into the real movie scene, seeing how you’d be able to take the place of an Arnold Schwarzenegger, for instance. Movies featured in YooStar2 include 300, Matrix, Sherlock Holmes, Book of Eli, Fast and Furious, Kick-Ass, The Hangover, The Godfather, Casablanca, and Blade Runner.

Rhythm Is Here to Stay

The revolution may have started with a single plastic guitar, but it’s clear that the rhythm game genre has quickly grown into quite the behemoth. You can use an electric guitar with 102 fret buttons. You can try your hand at becoming a part of America’s Best Dance Crew. You can even tell your guy that you need two bottles of NOS and you need them by tonight. There’s rhythm to acting too, you know.

Want more coverage? Our YouTube Channel is chocked full of goodness and so is our Twitter Page!

Love or Hate Our E3 Coverage? Leave a Comment or Hit The Forums!