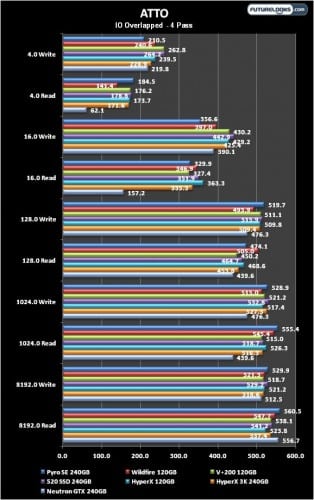 Thinking about using the Neutron GTX in a server? The 4K and 16K data write performance is pretty good but the read performance is much lower than the Pyro SE and V+200 asynchronous SSDs. This could be just a LAMD controller with relative young firmware compared to more seasoned Sandforce competition. Otherwise, the performance starts to match up with larger data test sets. 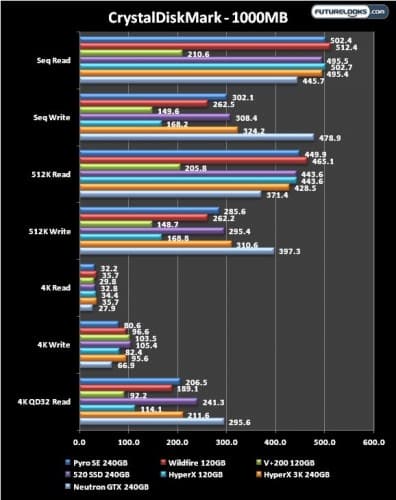 Well, it doesn’t seem compression is problem for the controller in 512K and Sequential performance. However, 4K read and write suffer a bit more. This was confirmed by running the same test on another Z77 and X79 system. The LAMD LM87800 controller combo will definitely need some more tuning in this respect for a more even performance. 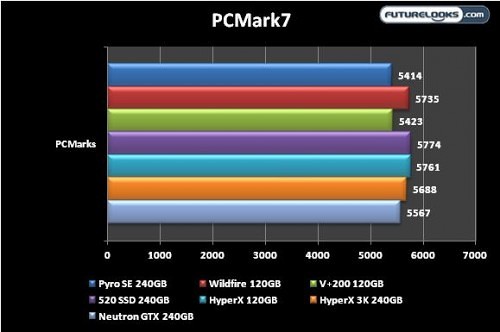 Overall, the Neutron GTX does relatively well handling the PCMark7 benchmark. It gives the test system a decent amount of teeth. Still, that lower small block data performance indicated in the other benchmarks, also influences the score in this benchmark enough to end up in the middle of the pack. Let’s look at real world tests next.

Some real world timed tests (while monotonous) are needed to see just what SSDs do for you in day to day use. The usual audio driver, video driver control panel, network, and additional windows speaker prompt were the only programs loading for each pass. Let’s see how it does with boot times, game loading, and accessing some good sized photo files. 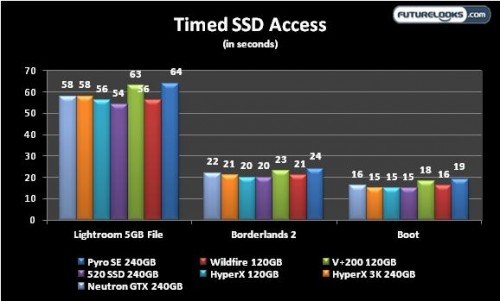 Ultimately, booting in to Windows is much quicker with any SSD and puts the Neutron GTX with the second best time. Borderlands 2 loads very quickly as well, if not counting Steam’s extremely unreliable connection time. In either case, a few seconds is no big deal and it’s right with the rest of the pack.

When loading large Lightroom files, this action required considerably more time. The Neutron GTX fairs relatively well. If this were a platter drive test, we would still be waiting for the file to cache. The Neutron GTX ties the HyperX 3K. 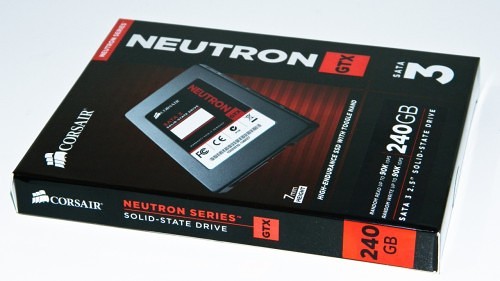 The Corsair Neutron GTX 240GB SSD isn’t quite the high speed mover like the Force GT but it’s also not the slowest SSDs in the lab. Not to sound like a broken record, but the LM87800 LAMD controller seems to require a bit more tuning in the very important 4K performance range. This was evident in our ATTO and CrystalDiskMark benches and ultimately, ended up giving a middling, but not unexpected, performance in PCMark7. This is a bit of a surprise given that this SSD utilizes faster performance synchronous NAND.

On the other hand, in our real world tests where it really matters for most mainstream users and enthusiasts, it still presents a very enjoyable SSD performance experience. Plus, the unique 7mm height of the drive really makes it versatile as an upgrade in many notebooks with slimmer dimensions. I guess this is where the Neutron GTX could see itself very dominant because there are currently very few 7mm height SSDs on the market.

Finally, it comes down to price and at the $249.99 price tag of the Neutron GTX 240GB, doesn’t make it very competitive. Especially since the $179.99 entry level Neutron 240GB SSD performs so very similarly in most aspects. In fact, there are some Force GT SSDs still available for less that use a much more mature SandForce controller that seems to be right up there in the performance.

With the performance and cost information in hand, it doesn’t take an economics major to realize that the Neutron GTX will not only need a price adjustment to keep it competitive with even its own non GTX sibling, but with others as well too. We hope that in time, the new controller gets tuned to perfection so that it can command the premium price.