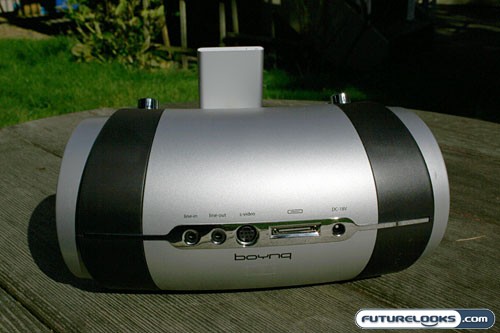 The back side of the Sabre offers a robust set of connections that everyone will probably find a use for. There is the dock connector pass-thru that lets you use the iPod cable to connect the Sabre to your computer, a line-in and a line-out port which would allow those who do not have iPod to patch their MP3 player into the Sabre via the stereo line-in cable and the S-Video port which allows you to pass the video from an iPod into a TV via the supplied S-Video to composite cable.

The Sabre offers all the inserts for the iPods that Apple has created so that they will work without ruining the look of the unit. At the time of writing this I am not sure if it would support the new Apple iTouch.

Taking the Sabre Out for a Spin

After finding my Apple iPod Nano (2nd Generation) and inserting the correct insert (they are labeled on the back), I slide the Nano into its spot and turned on the power. Right away the Sabre began recharging my iPod which is nice to see but it was time to play some music and see how the Sabre does as a speaker system.

Right off the bat I noticed that there was not much of a low frequency sound (as in the bass was pretty non-existent) but then I though perhaps it could be one of my songs I was playing. So I played a couple of different songs (Walk by Pantera, Don’t Stop The Music by Rhianna, Darling Nikki by the Foo Fighers and My Front Porch Looking In by Lonestar) and noticed it was not the songs but the actual Sabre that does not seem to do a good job at producing the lower frequencies. In other words the music sounds a bit hallow.

Now I noticed that the Sabre does have some power behind it. I only had it up to 1/4 of the full volume and I just would not take it any higher because it was far too loud at that setting. I am afraid to turn it up to even half way! 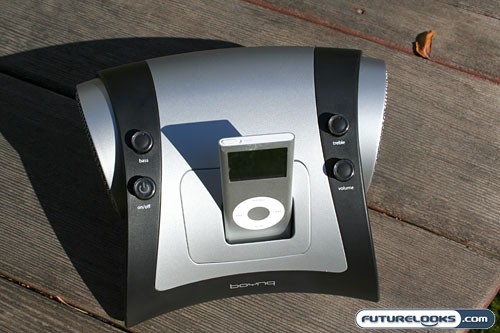 The bass and treble controls on either side of the Sabre did not provide much of an adjustment to the sound quality. Even using the various ‘pre-sets’ that the factory recommends via the card they include did not help create a better reproduction of the music I was playing.

One of the features that boynq Sabre has is the shielding against high-frequency interference from devices such as cell phones. Well I put it to the test and sent a few text messages to friends.  I left the phone near the Sabre to see if the shielding worked.  Well, no such luck.  Although you could say that the interference was a little less pronounced, it was still audible, but I guess its nice to know when you’re getting a call while rocking out.