Software Setup and In Game Performance

The most important function of this keyboard is what it was designed to be: A gaming keyboard. There are dedicated macro keys on the left side of the keyboard with two modes for game use, but you can also reprogram any key on the keyboard. If you need more macros on your left hand for MMORPGs, move the number pad to the left side for an extended macro panel. Selecting the functions of the keys are done with the included software.

The AZiO Mech 5 software is both simple and very robust. It shows the keyboard layout where you click on the key to bring up the program options. To setup the macro keys’ secondary mode, physically press the A/B button to switch to the B functions in AZiO’s software. You can then save your profile with a custom name so you can select it for later use. 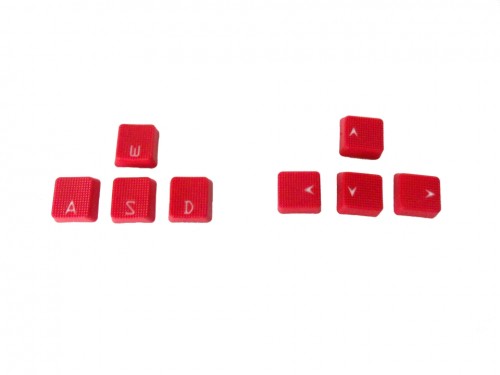 AZiO also includes several replacement keys for the WASD and arrow keys to help the in-game experience. These keys have a rubber texture to improve grip, are separate them from other keys, and prevent in-game wear of your normal typing keys. These keys are slightly shorter than the standard keys which takes getting use to when you first install them, but does provide the ability to find them easily in darkness. We will discuss this more in the everyday usage section.

We found the D-pad on the Mech 5 more useful than the macro keys as we could identify the button without looking at the keyboard. The D-pad can get in the way of pressing the number keys across the top of the keyboard due to its large size. This can be a hindrance at first but quickly becomes a non-issue after you use the Mech 5 in-game a few times.

The macro keys are a different story with all the same shape and little space separating them. It is very hard to tell them apart from one another. The macro keys are useful in RPG games such as Neverwinter Nights 2 or MMORPGs that use a mouse click for movement since you can then move your left hand to the macro keys when needed for combat. The macros are very useful in these cases but take work to get the best setup. 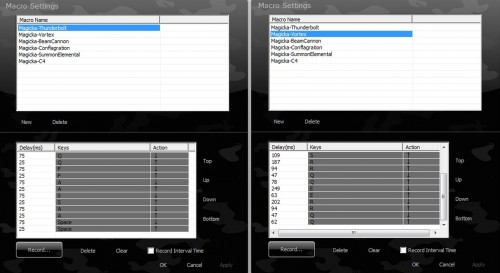 The macro programming system is a little too simple as it is designed to mimic your actual key presses. This means it records ever key as a press, a hold, a release, and a timed gap between keys. In some cases this resulted in actions being slower than if manually done. Thankfully you can tweak the timed gaps to improve in-game performance of your macros but it takes a lot of trial and error to get it right.

We found some games like Magicka that don’t work well with macros and proved to be very frustrating to set up. Uniform timed presses or inputs that are too fast will not register. You have to be mindful of how a game responds to your input to tweak the commands to wait for actions to be complete before moving to the next one. This process can be time-consuming but worth it once you get them just right.

Overall the AZiO Mech 5 is a good companion for gaming with only a few minor annoyances to overcome. We think AZiO should add a way to import/export macros or profiles so the online community can share the best setups for games. Gaming is the central focus of the design of the Mech 5, but it also needs to handle those day-to-day tasks when needed. 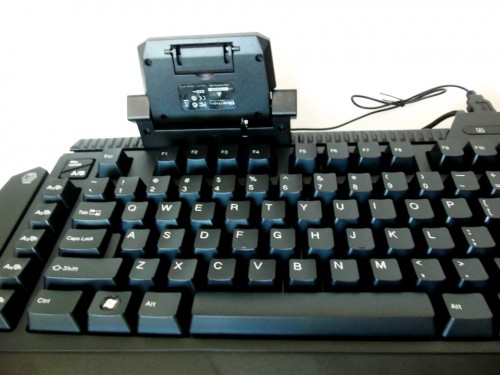 As you recall, the AZiO Mech 5 uses Cherry MX Black switches which are best for FPS according to most. The Cherry MX Black switches are linear, require a fair amount of force to actuate, and do have a noticeable, but not overbearing click when pressed. These can be considered the grandfather of the beloved Cherry MX Red switches many companies are using now. The only difference between the two being that the MX Black require more force to press down.

In scenarios when you are not playing a game the Cherry MX Black keys work in your favor a bit. Due to the high pressure required to press them, we found it easier to abort pressing an incorrect key. This minimizes typing errors and saves you time. The draw back is hand fatigue setting in faster than other mechanical switches. If you often type for sessions lasting hours on end, this is not the keyboard for you. 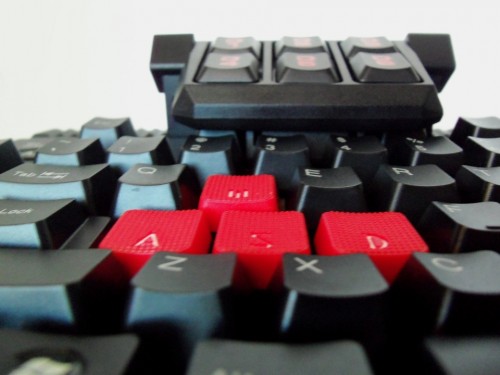 The other issue we found for everyday use are the included gaming keys. The red WASD keys are much shorter than the standard caps. As a result I found my hand unconsciously shying away from pressing them because they felt different from all the other keys. It took a few days to completely get over this, but installing the standard caps for typing is an option as well.

The best part of the AZiO Mech 5 in daily use actually comes from the macro keys and d-pad. We found ourselves finding new ways to program the keyboard to fit whatever software being used. Programming the D-pad as media keys, common actions for Photoshop, or one button spell check in your office suite. It was fun to program new layouts, but you always have to return to the software to switch profiles. We would like a way to switch between created profiles without having to return to the software. We think this would be a much better way to improve the Mech 5 usability in and out of games.