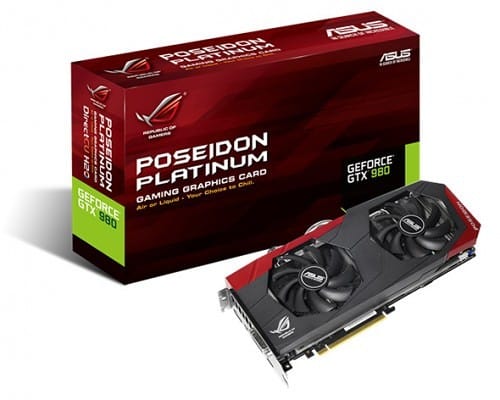 The NVIDIA GTX 980 is the company’s hottest GPU to date. With a more reasonable price of around $599.99 US MSRP, and loads more performance for the dollar over even its highly decorated GTX 7xx series, the next generation Maxwell GPUs have solidified their place in gaming history. ASUS is also looking to solidify themselves as a top provider of solutions built on the new GTX 9xx series, with their new, Poseidon GTX 980.

The ASUS Poseidon GTX 980 is a GPU fish that breathes both air in its stock configuration, but it can also be adapted into a water cooling loop extremely easily, thanks to its DirectCU H20 cooler design. This cooler allows you to plug it right in to your custom water cooling setup, with G1/4 inch fittings, without having to retrofit with an after market solution. ASUS claims that this solution will reduce your operating temps by at least 27C, when running on water, allowing you to overclock further. 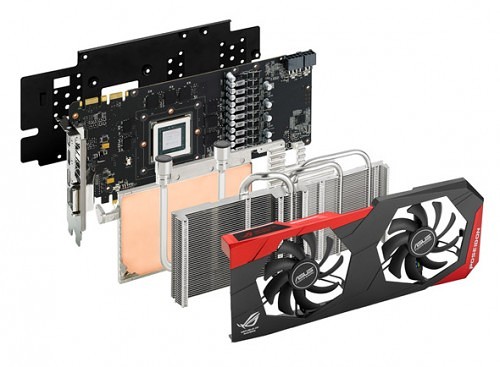 The Poseidon is also built to last with dust free fans, Super Alloy Power Chokes, and hardened metal MOSFETS that can take much higher stress than standard reference designs. It is also clad in its own thermal armor, with strategically placed aluminum metal plates, further allowing the dissipation of heat.

The best part of the ASUS Poseidon GTX 980 has to be the price, and will sell for only $639.99 US. When you consider the cost of a retrofit for water cooling, and the time consuming effort to do it right, it’s a downright bargain for a water cooling capable GTX 980. Full press release is below.

Fremont, CA (16th December, 2014) – ASUS Republic of Gamers (ROG) today announced the Poseidon GTX 980 with DirectCU H2O, a new graphics card with a hybrid thermal solution that enables efficient cooling by either air or water. Armed with a host of exclusive ROG features, the Poseidon GTX 980 is for gamers that want superlative performance without compromise.

Cooler, Quieter and Faster with DirectCU H20
The ROG Poseidon GTX 980 is fitted with exclusive DirectCU H2O technology, which employs a combined air and water channel to provide complete flexibility for the user.

A custom vapor chamber is in direct contact with the card’s GPU for faster heat dispersal, while copper heat-pipes and extended cooling fins further transfer heat out and away from the card to keep it running cool. With water cooling, the ROG Poseidon GTX 980 achieves up to 27°C-lower running temperatures than reference designs — translating to gaming performance that’s up to 10% faster in Watch Dogs™ and 7% faster in Battlefield 4™.

The new card also features dust-proof fans that are both quiet and help keep the card free of particulates, reducing the need for routine cleaning or maintenance.

The ROG Poseidon GTX 980 also benefits from a tough back-plate that’s made from an aluminum alloy and a unique die-cast thermal armor with thermal pads — preventing bending and further improving cooling in the crucial power MOSFET and memory areas.

Attention has also been given to aesthetics – the ROG Poseidon GTX 980 features LED lighting that glows red and pulsates when the card is active, making it ideal for showcasing in an enthusiast PC build.

Tweaker Friendly
ASUS GPU Tweak software is also a part of the ROG Poseidon 980’s repertoire, an exclusive tuning tool that allows quick, simple and safe control over video-memory clock speeds, cooling-fan speeds and power-consumption thresholds — allowing the GPU to be pushed to its limits.

The GPU Tweak Streaming tool lets users share on-screen action over the internet in real time, so others can watch live as games are played. It’s even possible to add a title to the streaming window along with scrolling text, pictures and webcam images.

AVAILABILITY & PRICING
The ASUS ROG Poseidon GTX 980 will be available soon from ASUS authorized resellers and distributors with an MSRP of $639.99