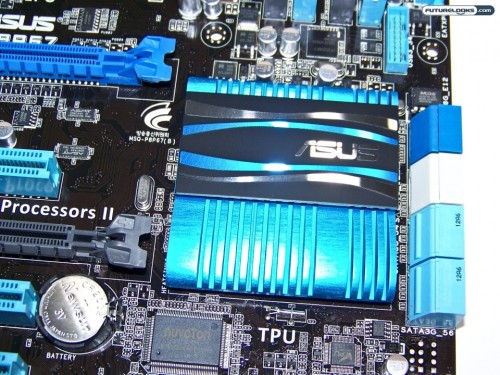 The BIOS appears to be exactly like the P8P67 EVO’s BIOS which just makes sense as most of the key features are the same across the series. Thus far, ASUS has the most intuitive and highly detailed BIOS, which requires some extra practice to become proficient. The trick to overclocking the CPU here is to use the “offset voltage” options instead of just forcing a full 1.5 volts in to the cores. While some people advise disabling Intel Speed Step, the system actually does better with it enabled, allowing it to drop to 1.6GHz when idle, and then right back up to the overclocked frequency. 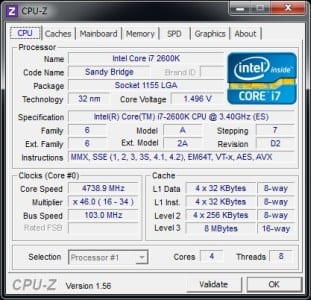 In order for an overclock to be considered stable, the system has to pass triple iterations through Sysmark 2007 and not just 3D testing alone. After offsetting the CPU voltage to what would be a 1.5 volt limit while increasing the multiplier, the system actually ran 4.74GHz flawlessly under all tests. With some extra tweaking, it’s very possible you’ll see 4.9GHz. It pushed our Kingston HyperX Genesis 4GB dual channel kit in to 2300MHz territory as well.

To put it mildly, it’s not every day you see an entry level platform causes you to double check that you’ve installed the right motherboard. This is a very good result for an “entry level” $150-ish platform. 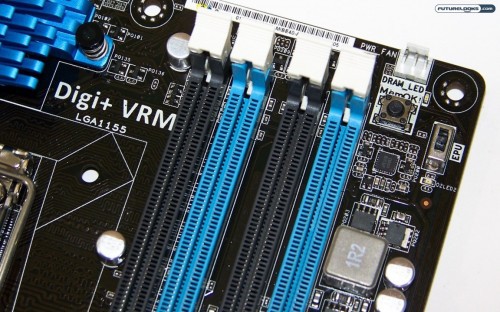 Our benchmark suite consists of software designed to test the system’s overall abilities right down to its sub-systems. If something is amiss or isn’t performing correctly, it’ll show up here in the comparison. Here are the software titles.

If the system can’t pass triple iteration tests with Sysmark 2007, we consider it unstable. It’s been very useful locating instabilities in regards to any sub-par components or a poor overclock. Quality Control inspections were performed utilizing both our spider like senses and a laser thermometer. We’re looking for any unusual noises and high component temps that could indicate implementation issues. Power Consumption was measured using a power meter from the outlet. 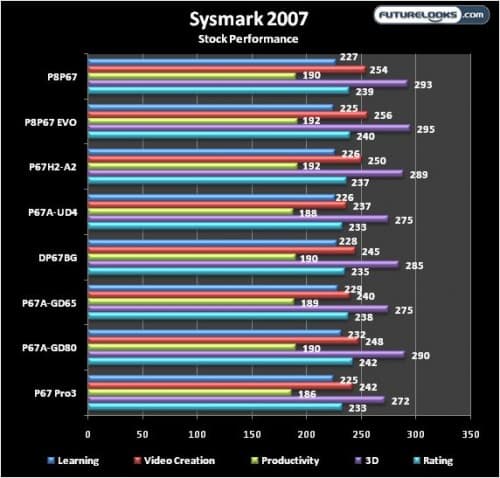 First, we go looking for stock performance advantages or differences. As you can see, whether we have dual graphics platforms or not, scores are relatively close. But, unseen sub-system implementation effects the overall rating score. The P8P67 does very well within the pack. 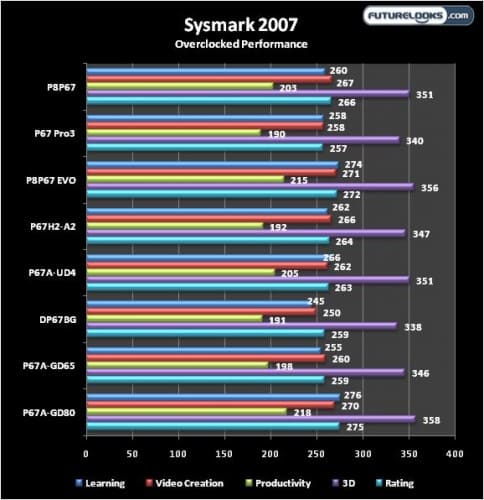 Next, for whatever crazy reason, the platform is overclocked and expected to pass triple iteration tests without error or instability issue. The P8P67, again, holds its own. It’s further proof that its fine tuning makes all the difference.