Breaking Into the Twelve Hundred 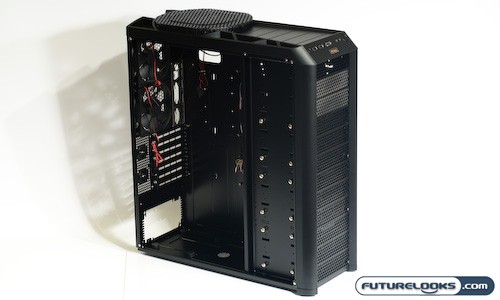 Unlike some of its other gaming case brethren, the Twelve Hundred doesn’t use any fancy quick release mechanisms. It’s no CoolerMaster Cosmos 1000 or even an NZXT Adamas when it comes to releasing the case panels. Standard thumb screws are used to secure both the left and right side panels and are liberally employed in the retention of the drive bays. 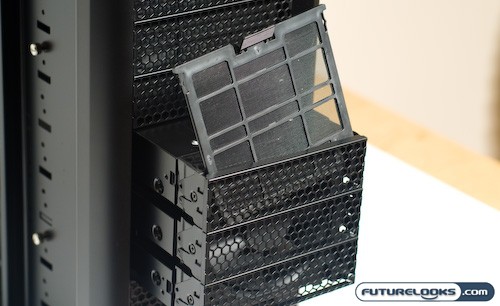 The bottom nine drive bays are grouped in threes and are removable once you take out the eight thrumb screws that hold each one of them in. This takes quite a bit of screwing and unscrewing and there were a few times where I was worried that I would wear the threads out. Each set of three bays is cooled using a 120mm intake fan. Antec has included filters in all these bays that quickly release and can be removed easily allowing you to clean them when they get really dusty. 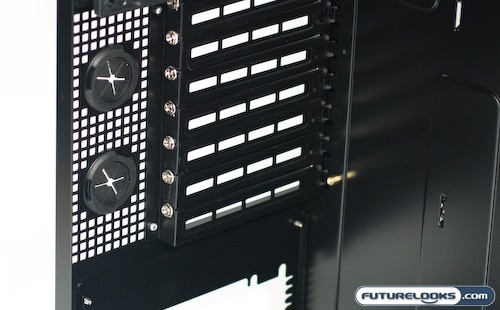 Inside, we get a good look at the water cooling featues built into this case as well as the seven expansion slots. A really nice touch that Antec has built in is the addtion of pre-ventilated slot covers to allow maximum air flow between your hot cards. Unfortunately, no thumb screws for the expansion slots. 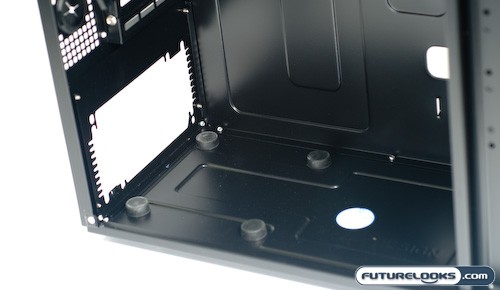 The power supply mounting area is suspended by four rubber feet that keeps your PSU from sitting on the floor the case. Based on this configuration, it would appear that Antec built this area specifically for one of their Quattro power supplies that use a rear mounted fan instead of a larger top mounted fan. If you look closely, you’ll see that Antec has used attached a plate to shrink the mounting hole to accomodate a regular power supply. Antec has done this to make this case ready for their new line of power supplies that use a non-standard tall profile that will only fit in cases built in this fashion. Removal of the plate will allow you to install one of these new style of power supplies due later this year.