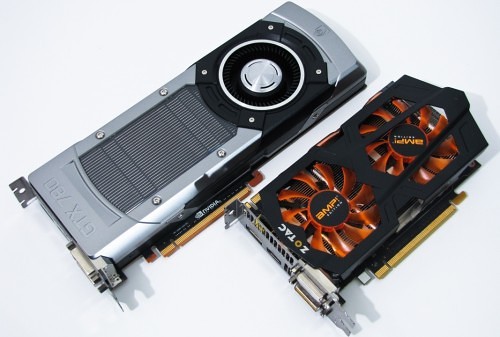 In order to save you time and cut to the chase, we’re keeping things short and sweet. We really don’t need to see 300 game titles tested on the card to figure out if it’s better than the previous generation. If it runs on games like Assassin’s Creed III, Battlefield 3, Metro: Last Light, and Batman: Arkham City, as a general rule, it will run anything including Crysis 3. Here’s the test system break down…

The display is an ASUS VG278H 3D monitor operating at 1080p. Game settings are all maxed out to make the GPU work hardest. Games were tested in regular mode then 3D Mode was tested at the end. Temperatures were monitored with EVGA’s Precision utility. A Seasonic Power Angel at the wall was used to determine power consumption.

One final note is that the HD 7970 GPU was tested with PhysX disabled because it doesn’t support the feature.

It’s pretty rare to see someone buying the latest video card to only play their old games. So instead of testing every generation of game, we’ve decided to concentrate on what’s most important which are the latest games that tax the performance of today’s GPUs.

AC III is pretty amazing for this level of detailed game play. Average frame rates were combined running around the port after the opening ship scene. 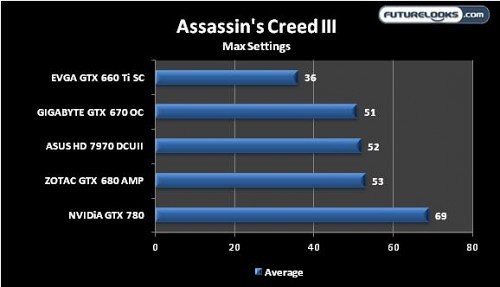 In most scenarios, the game renders pretty easily even with maxed settings. The GTX 660 Ti struggled the most. Even the GTX 680 worked pretty hard in the port scene. Otherwise, the GTX 780 kept a higher 69 FPS average showing it to be a stronger GPU. I also appreciate the ASUS HD 7970 DirectCU II’s rich detail and contrast. If this was a test more about perceived image quality, then that card really puts NVIDIA’s best on notice.

While this game is growing a little long in the tooth, the semi-recent game updates still make it a strong first person relevant shooter. When you find a smoother server, it’s quite enjoyable. Since those servers are few and far between, I benchmarked the cards in Single Player mode. 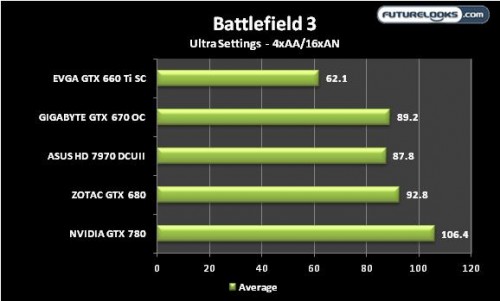 When the brass landed and the smoke cleared, all of the cards are more than capable of running the game maxed out. The GTX 660 Ti has a little trouble when there is a lot of lighting from explosions, flashes, and quick movemnt. 3D mode adds an extra realistic effect which makes you just want to keep going. Ultimately, the GTX 780 is super smooth at all times and there is no noticeable tearing with Adaptive Vsync (AV) enabled.  BF3 tears often so AV is your friend. 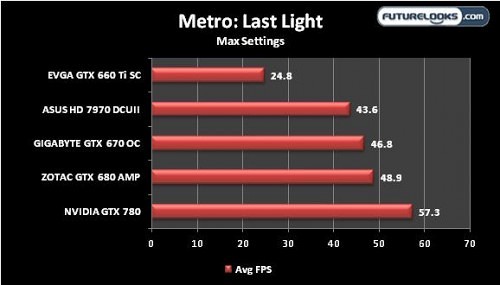 One of our previous benchmarks, Metro 2033, was a GPU crippler on its own. But it’s time to move on so I retired it to try out the latest Metro: Last Light and the details are both amazing and even more taxing on system resources. It’s also a GPU monster so keep that in mind if you have an older video card. You’ll almost definitely need to turn down some settings to run on last generation equipment as shown in the chart. Again, GTX 780 holds up better than the rest. 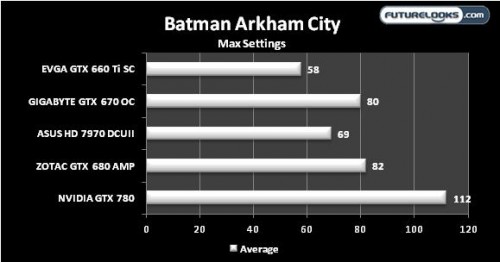 Sure, this is a semi-aging title but it’s still a viable game engine and a good gauge for RPG type games. It’s also a lot of fun even today and offers a lot of re-playability thanks to DLC content. From the scores, you can see that the GTX 780 blows its predecessor away. PhysX be blessed, it doesn’t bother the card at all. Crank those settings up!