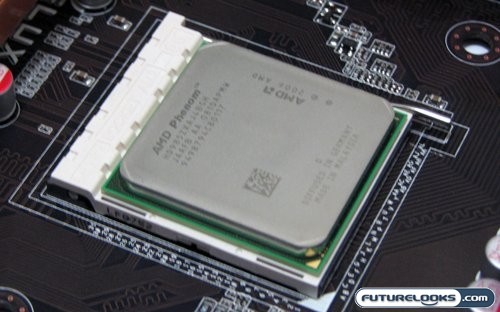 Once the Phenom was installed and the test system was set back up with Windows Vista, I set myself to the task of testing everything out. First and foremost, I want to run some simple synthetic benchmarks to see if the TLB erratun had truly been fixed, and if that fix had incurred a performance hit. Before we do that though, let me elaborate on exactly what the TLB erratum is.

Prior to the Phenom’s initial release, it was discovered that a bug in the translation lookaside buffer (otherwise known as a TLB) in AMD’s quad-core processors could cause a system lockup in rare circumstances. This of course included the first Phenoms, which were of the stepping codes “B2” and “BA”. A few BIOS and software workarounds appeared to prevent this problem from occurring by disabling the TLB, but these workarounds typically incurred a performance hit of at least 10%. That has since been corrected in hardware. Processors with the bug fixed have “50” as the last two digits of the model number, with stepping “B3”. The processor we’re reviewing here falls into such a category.

The first benchmark we ran to test these different modes was a quick run through on 3DMark Vantage in Performance mode. Though this latest version of 3DMark is meant to test video cards, it does have a CPU component in it. To test the different environments in which the CPU would operate, I went into the BIOS and made to appropriate changes. OverDrive is a little too flaky for my tastes, and would hard lock the system when I was just changing the TLB mode. Anyhow, I shot for a modest overclock for these tests. I was able to push the Phenom 9850 to 2.8GHz with only having to bump the Vcore to 1.325V. I then hurried up and waited for each test run to complete.

As you can see, the TLB fix being enabled or disabled has no effect on the overall performance of the Phenom 9850. The processor works to it’s full potential all the time. As for the overclocking numbers, they are definitely a significant jump over stock speeds. The CPU test tracks almost linearly, producing a 10% performance increase with the 12% increase in processor speed.

When we switch to the PCMark suite of tests, things get a little more muddled. PCMark05 has a more clear cut definition of CPU performance in its testing, which is the reason we used it. The main composite score generated showed some minor variances, with disabling the TLB fix garnering a minor amount of additional performance over it being enabled. Overclocking the processor of course gave the best performance numbers, with the 300MHz jump in CPU speed producing between a 4% and 9% increase in performance. This doesn’t quite match the 12% jump in speed, but this is just the composite score, and also factors in video card and memory performance.

Isolating the benchmark to just the CPU tests is where the full story really starts to unfold. The CPU tests showed the expected outcome, with little to no difference between the TLB fix being enabled and disabled, and overclocking performance producing some significantly higher test results. These results also scale better, with the overclocking of the Phenom 9850 producing an 11% performance increase.