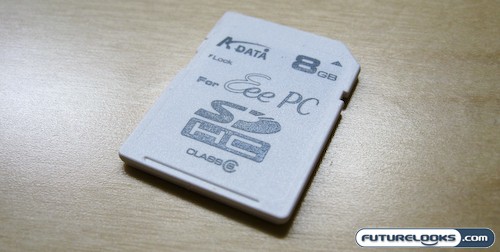 It seems that like with the whole iPod craze, everyone wants to get into the branding game with products made for (fill in the blank). Under the surface, the A-DATA EeePC 8GB SDHC memory card is just your standard Class 6 memory card which are rated at a minimum 6 MB/s read and write speed. No one said that “HC” in SDHC stands for speed. In fact, it stands for “High Capacity”. 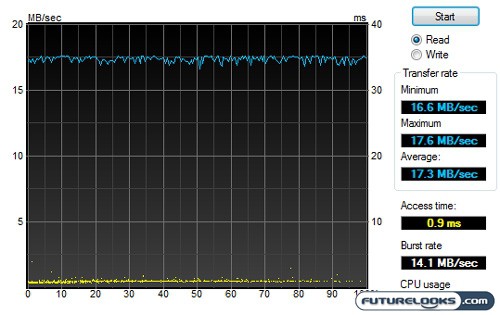 Our benchmarks show a maximum transfer rate of 17.6 MB/s, an average of 17.3 MB/s, and a minimum of 16.6 MB/s. All of which are far above the minimum of 6 MB/s as stated by the class rating. A-DATA has no numbers of their own on their page, but have stated that this is one of few ASUS endorsed memory cards for expanding the storage capacity in their EeePC line of compact notebooks. Read speeds using our drag and drop test of a mixed media file of 594 MB yielded a time of one minute and ten seconds, which gave us a write speed of 14.85 MB/s.

SANDISK’s Extreme III SDHC line boasts a 30 MB/s read and write speed, which translates to a little more than half in the real world, making A-DATA’s offering quite a bit more competitive. Factoring in pricing, where the non branded A-DATA Class 6 SDHC runs around $35 versus the price of the Sandisk Extreme III 8G SDHC that run anywhere between $45 – 101 and A-DATA starts looking pretty good on the price to performance ratio in SDHC media. The only question remaining for the A-DATA products here is the question of reliability.

For sixty days, I remained at the mercy of the A-DATA cards, abstaining from grabbing any of my well trusted and reliable SANDISK Extreme II cards. I shot tons of pictures, hours of videos, and formatted a lot in those sixty days and there was not one scary moment. In terms of compatibility, I used the A-DATA EeePC SDHC in anything from my Canon SD850is to the Samsung SC-HMX20C HD Camcorder and even as a ReadyBoost drive in my ASUS U1F; never once was there a problem with recognizing this card.

The A-DATA Turbo 266X 8GB Compact Flash card saw action as fodder for my NIKON D200 DSLR and one of them even spent most of its time as the storage medium inside a compact flash hard drive adapter from SANS Digital, which we’ll be reviewing a bit later. In either case, I experienced no compatibility problems and no moments of fear that would cause 8 GB of my photos to disappear, or my experimental OS install on the drive adapter to crash. Other tests involved some majorly hot, muggy, and dusty conditions with my camera equipment. If only I just had some freezing cold. No problems. No data lost. Just seemingly endless reliable shooting over sixty days.

The Final Word on A-DATA

When A-DATA gave me these cards, I thought that this would be a disaster waiting to happen. However, after a solid 60 days of regular and extreme use, I can no longer doubt the performance of these two products. I wasn’t exactly being nice to them either, subjecting them to quite a bit more punishment than I would any of my normal media. A-DATA has definitely proven that they make some reliable and compatible product that is backed up with their lifetime warranty. Only time will tell if these cards keep ticking, but for 60 days straight, they haven’t caused me creative heart ache and any reason to doubt them.

The prices for these cards are attractive and if you are looking for reliable and good performing storage, I recommend that you check out these products. Ignore the EeePC part of their SDHC cards. It’s actually a solid product underneath the branding, or just pick up one of A-DATA’s non branded ones. The only downside is perhaps the write speed of their compact flash cards. They don’t offer the much higher write speeds of competitive products from other trusted manufacturers, but if you take your creativity one shot at a time, then this might be a good way to go for you while saving a buck too.