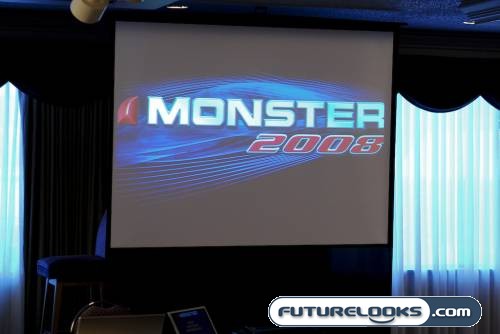 After a busy CES 2008, the minions at MONSTER Cable hit the road again, this time landing in Vancouver, British Columbia. Lead by the “Head MONSTER” himself, Noel Lee, MONSTER Cable was out to spread the MONSTER gospel by telling the masses about their new HDMI cables, Power Line Networking ready Power Centers, and Screen Cleaning products. MONSTER also brought along some super secret sauce products that should be hitting the shelves in the very near future that have something to do with iPhones and Dr. Dre. Read on to get all the details!

The Need for more HDMI Speeds… 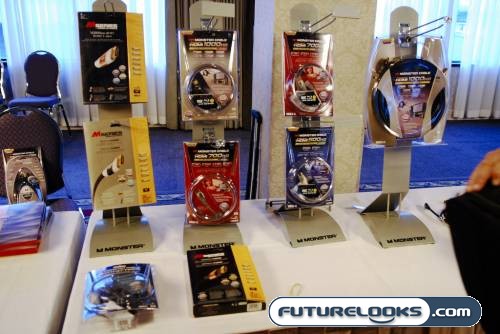 MONSTER preaches “Good, Better, Best”. But what does that mean to the inquisitive consumer? Is good, good enough, or do I really need best?  Or is better…well…better? MONSTER attempts to eliminate the confuzzle with five different levels of HDMI cables that offer performance matched to the equipment that you own based on the cable’s data transfer capabilities. For example, if you’re hooking up a standard non-upconverting 480p DVD player, you obviously don’t need to splurge on their Ultra-High Speed M1000 HD cable. Instead, based on that combination, the Standard-Speed MC 550 would fit the bill because it supports up to 2.23 Gbps of data transfer, which will also work for standard HDTV (720p/1080i). Of course, if you are a chronic upgrader, having the higher end cable wouldn’t be such a bad idea because after you seal up that cable under the drywall, you really don’t to replace it again to support your new Ultra High Definition set down the road. 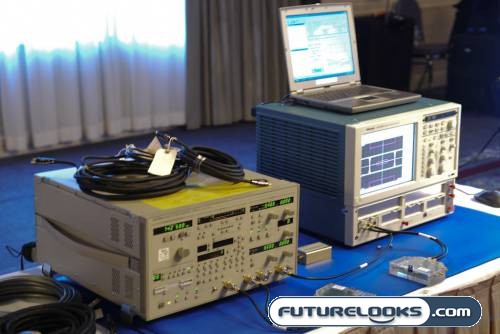 In order to flex their MONSTEROUS cable muscles, MONSTER dragged out their high dollar Eye Test Pattern machine to prove that their cables are the real deal. The Eye Test is an industry accepted performance test for HDMI cables and each MONSTER HDMI cable is pre-tested from the factory to make sure that it will perform. We had fun picking cables from different manufacturers to test against MONSTER’s own. The Eye Test Pattern visually shows how well a cable is able to handle the different signalling rates called upon it to transfer data between components. For example, this cable failed the test while this cable passed with plenty of room.

Just for fun, we asked them to take their lowest end standard-speed MC550 cable that runs between $59.95 to $149.95 depending on length and compared it against a high-end Canadian made ENERGY HDMI cable that retailed for around $350 bucks. Both of them were about 16 feet. For even more fun, we asked them to crank it right up to the 10.2 Gbps test (which the MC550 is NOT rated for). The MC550 still passed with room to spare and the more expensive ENERGY cable…just didn’t have the energy. 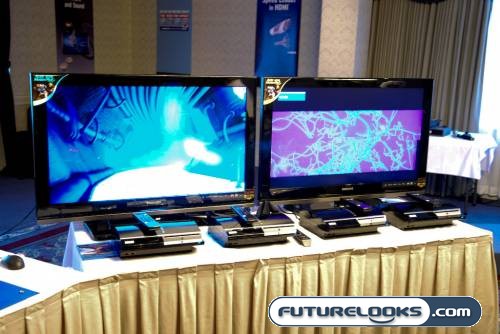 Of course, we were skeptical that the tests might be rigged.  I mean, afterall, the equipment belongs to MONSTER. Just to prove their point, MONSTER hooked up two Samsung 1080p 120hz panels to two Playstation 3’s running at 1080p. They hooked up the MC550 to one and the ENERGY cable to the other. Because the ENERGY failed in the test, it also failed in real life, unable to keep a picture stable on the TV (right side). Because the MC550 passed the Eye Test, it also passed the test in real life (left side). Not bad. I expect sales for the bottom end MC550 to be brisk. However, if you do want to buck up for the high end MC1000, MONSTER will guarantee that this will be the last HDMI cable you will buy with a lifetime replacement if it ever fails to provide enough throughput for the latest technologies. The full line of cables should be available now.