Consumers are looking for larger SSDs at lower price points and it seems the NAND manufacturers (Intel, Micron, etc) are dragging their heals on releasing larger capacities that should drive down those prices. However, prices are far better than they were three years ago and manufacturers like Kingston Technology continue to offer full upgrade kit retail packages that allows users to add their new SSD and mirror over their operating system easily thanks to a good software bundle and accessories. This makes the company’s SSDNow and HyperX series very appealing.

The last consumer affordable Kingston SSD we tested in the lab was the V+200 series. For the price and performance upgrade, it was great. But a newer more up to date controller brings us to the V300 series launched for both desktop and notebook users in full upgrade kit trim levels. Let’s have a look at the Kingston SSDNow V300 120GB SSD  and see what it has in store for users. 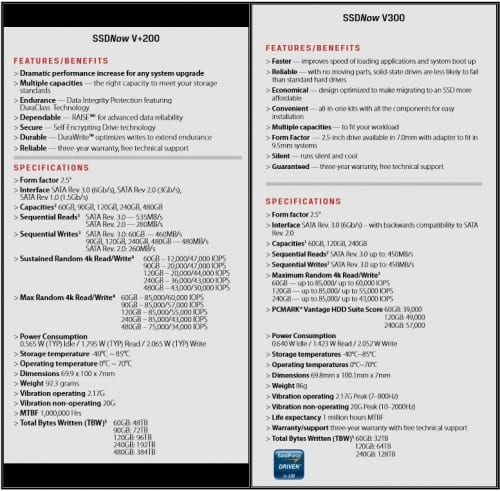 In a comparison of the V+200 and V300 above, you can see the main differences between the two V Series SSDs. It looks as though the V+200 has slightly higher specs than the V300. On paper, that looks good but it’s the actual NAND and controller that solidify real world performance. The reason I say that is because the V+200 has a different controller over the V300, which utilizes an LSI SandForce controller. The V300 also utilizes smaller 19nm Toshiba NAND which is suppose to allow for larger stacking capacities and lower cost. If you’re still worried about any SandForce issues, those days are long gone as they are one of the top providers today.

The Kingston V300 SSDNow 120GB desktop and notebook upgrade kits are priced from $115 – 137 US according to our pricing engine. The stand alone SSD can be found for as low as $97.89 US. This makes the upgrade kit extras well worth the $10 for high class support. The series also comes in higher capacities up to 240GBs and a lower capacity unit at 60GBs, also available in kit form.

Some of the more serious DIY users like to know what is actually used to manufacture and assemble SSDs. The V300 now uses a polished SandForce 2281 controller to communicate with the internal 19nm MLC (multi-layer cell) NAND. Again, the 19nm NAND is manufactured by Toshiba which has worked surprisingly well within other SSDs. This makes sense as some of the higher performance NAND often cost more which means increasing the SSD cost. Since we have a cost effective V300 aimed at price conscious users, it only seems fitting.

Don’t misinterpret SSD performance though. The average user won’t be able to easily tell the differences between high cost high-performance SSDs and cost effective mainstream-performance SSDs unless its through benchmarks. Overall system performance will be improved by either. However, some folks like the guarantee of the fastest, optimal operating computer which something like the upper end HyperX series provides. Let’s see how the desktop and laptop V300 perform in comparison.

Kingston’s upgrade kits are designed for quick and painless set up. Inside each of the Upgrade Kit is kits along with the SSD is the very useful Acronis software for cloning your hard drive, or OS drive, to the SSD. A “How-To” DVD is also included which is a fairly new inclusion, and makes the process to smoothly for first timers. Just clone over your Windows installation and get to rocking!

As you can see, the Notebook kit also includes a 7 to 9.5mm mounting adapter, screws and portable USB enclosure with cable just in case you decide use it on the go. Some folks use bootable USB flash drives, so this could be set up similarly. Or, use the enclosure for an older, smaller SSD, or the old drive from your notebook as a backup. The Desktop kit includes extra power cable, data cable and drive bay adapter brackets.

The benchmark platform has changed just a bit so I’m utilizing just a handful of different SSDs based on the SandForce controller. The MLC SSDs have different NAND and speed specifications. The other tests involve using my Acer notebook with a platter based hard drive. We’ll mainly be looking at the benefits of SSD over HDD.

Here is the breakdown of both test systems…

The benchmarks are pretty simple and quick. I’m using HDTune Pro, ATTO IO Performance and CrystalDiskMark high compression bandwidth testing. While some folks may not like CDM for its high compression, it still taxes the SSD’s controller. This gives consumers a bit of an idea how well tuned any storage device is internally. Let’s get on to testing shall we?