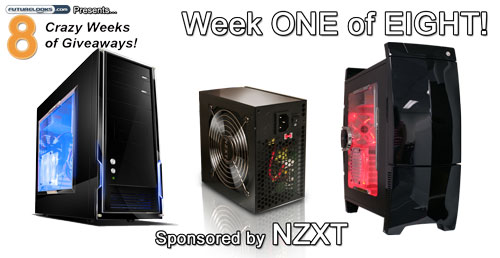 Last week we teased you all with the great prizes announced in our Eight Crazy Weeks of Giveaways; our biggest giveaway EVER!  Well, it appears our Week One Sponsor, NZXT, has upped the ante once again. Not only were they the very first to step up to help us out with this contest, but they stepped up again by pledging another great prize!

What Are We Giving Away Again?

Let’s have a look at those fabulous prizes again, including NZXT’s last minute addition… 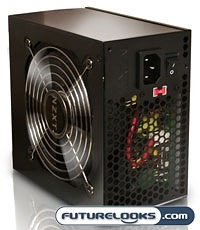 As a relative newcomer to the Power Supply market, NZXT has taken feedback from reviews as well as their loyal customers to continually improve on their designs.

The new NZXT PP800 is “tuned to power the latest peripherals and video cards on the market. The Performance Power 800 will power any high end system on the market today. At 78% load efficiency and paired with four +12V rails, the PP800 is the perfect solution for enthusiast systems“.  You can find more information about it right here.

The PP800 is one of two siblings, the other being the PP500, which is the 500 watt version of this quality power supply.  Most importantly, you have a chance to win it with Futurelooks!

The original NZXT LEXA was one of the cases that we found out in our interview with head designer, Johnny Hou, that completely drove his manufacturers mad.  The reason was because of its revolutionary curved door design that no one had the manufacturing expertise to build at the time.  That’s why we call him Johnny “The Rebel” Hou.

The LEXA Blackline is redesigned “with a menacing Black and Red theme. The Blackline comes equipped with two RED led 120mm fans running at 23dba and a top 80mm fan. The front is touched with an piano black finish and the chassis is reinforced by an 1.0mm steel chassis. The Blackline is also pre-drilled for external water-cooling and sports an complete screwless installation for 5.25″, 3.5″ and PCI-E“.  Pretty cool!  What’s even more cool is that we’re giving you a chance to win one today! 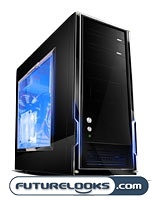 We originally saw this case at COMPUTEX in Taipei. Although it still didn’t have a name back then, we did find out that “The Rebel” Johnny Hou was determined to give budget gamers and enthusiasts a chance to own something that had his signature design at a price that wouldn’t FRAG you.

The case was Johnny’s and NZXT’s challenge to build a great looking and affordable case for under $49.  Because Johnny has standards, it couldn’t be some cheap ass looking thing that you’d be ashamed to own.  The Alpha “features a steel chassis and support for up to three 120mm fans when the optional side panel is included. Installed with the newest E-SATA port, the Alpha is ideal for both mainstream and power users. The NZXT Alpha also enables the user to fit large expansion cards like the NVIDIA 8800GTX optimal for SLI and Crossfire. Other features of the Alpha include space for up to 5 HDDs and screwless installation“.

You can find out more information about this great prize right here.

Stop Teasing Me!  How Do I Win This Cool Stuff?

There’s three prizes and two ways to enter to win them.  Pay attention!

Your First Chance: Sign up for our discussion forums and post your thoughts to the WEEK ONE CONTEST THREAD about what sorts of features you’d like to see in your next case.  You can talk about NZXT cases or just cases in general, but just feel free let’er rip on any aspect of case design that you think needs a bit of help.

Assisting us with this part of the contest will be Johnny “The Rebel” Hou himself as the best entry will be awarded the NZXT Alpha Classic Series Steel Midtower ATX Case. If Johnny doesn’t pick you, don’t worry.  We’ll be putting your name back in the draw for a NZXT PP800 Power Supply or a NZXT LEXA Blackline Case.

Your Second Chance: Sign Up For the Futurelooks Newsletter and receive one more entry into the draw for for a NZXT PP800 Power Supply or a NZXT LEXA Blackline Case. By signing up for the newsletter, you’ll not only receive instant notification about new Futurelooks Articles, but you’ll also be notified the minute that we announce the next week of prizes and how to win them.  You can sign up here or you can use the form located in the right sidebar.

How Much Time Do I Have?

The contest starts today, Monday, October 15th, 2007 and will close on on Sunday, October 21st, 2007 Midnight PST. If you have any questions on the contest or any of the draws, feel free to post your question or concern in the Official Eight Crazy Weeks of Giveaways Contest Thread.  Goodluck!