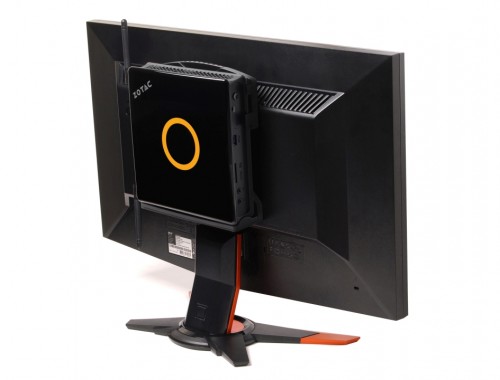 The saying “big things come is small packages” is, for the most part, never true. ZOTAC has always challenged that with the ZBOX series by packing in a lot of versatility into a very small package. This time ZOTAC is going to start a new front by taking on gaming with the new ZBOX EN760.

What makes the ZBOX EN760 any different from the previous entries in the ZBOX series you ask? Well it does keep all the features you would expect with a Intel i5 Haswell 1.6 GHz CPU (2.6 GHz Turbo), 802.11ac Wi-Fi, DVI, DisplayPort, and more. The EN760 adds a little more with dual Gigabit Ethernet ports and a Nvidia GeForce GTX 860M graphics processor. The GPU has 640 CUDA cores clocked at 1020 MHz (1097 MHz turbo) and 2GB dedicated GDDR5 memory at 5 GHz.

The ZBOX EN760 is just a mSATA drive and some high performance memory away from being a pretty good gaming system. And it’s an exceptional one at that when you consider it is small enough to mount on the back of a monitor with included hardware. This is the perfect setup for someone who needs a home computer and likes to real games. You can find more details below. Pricing has not yet been announced.

ZOTAC Ushers in New Era of Gaming with ZBOX

There is plenty of expansion capabilities with the ZOTAC ZBOX EN760 series with a 2.5-inch SATA 6.0 Gb/s drive bay, mSATA 6.0 Gb/s slot, two DDR3 SO-DIMM slots and four SuperSpeed USB 3.0 ports. Intel Smart Response Technology enables the ZOTAC ZBOX EN760 series to accelerate the performance of traditional hard disk drives with an mSATA SSD up to 64GB for the perfect blend of lightning-fast SSD responsiveness with the large storage capacity of an HDD.