Hard drives remain the last great bottleneck in performance computing. Processors and RAM constantly get faster and more complex, due to being solid state electronics. Since hard drives consist of moving parts, they have been left behind in this race. Sure solid state drives have become available in the past year, but they are extremely cost prohibitive. So over the years companies have had to find creative ways of squeezing more and more performance out of the 50 year old hard drive. Western Digital is one of those companies. 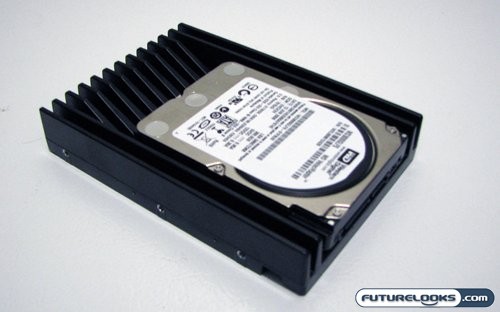 Their Raptor line of hard drives have included features usually only seen in enterprise class SCSI hard drives. Released in 2003, the first Raptor had a rather small 36GB capacity, but more than made up for it in performance. The 10,000 RPM spindle speed allowed the drive to out-perform all comers from the consumer hard drive market. The drive even came close to matching contemporary 10,000 RPM SCSI drives in sequential performance. The SCSI drives still outclassed the Raptors in a multi-user environment, but that didn’t matter. The combination of high performance and low installation cost (relatively speaking, the drives were still pricey but they didn’t require a discrete and usually even more expensive controller card) meant that the drives were a hit with the PC gamer and enthusiast market.

Fast forward to April 2008, when the fourth generation Raptor is announced. Titled the VelociRaptor, this new drive increases its maximum capacity to 300GB using two 150GB platters, reduces its form factor from 3.5″ to 2.5″, and includes a 3.5″ mounting bracket that doubles as a massive heatsink. Western Digital bills it as an “enterprise-class” drive, and claims it’s 35% faster than any previous generation of Raptor. We’ll have to see about that, but first let’s take a quick look at the specs.

The complete specifications for the VelociRaptor can of course be found on the product home page. As for pricing, the VelociRaptor rings in at $299 USD. For those who have problems with division, that’s $1 per GB. Now several years ago that was considered a good price for storage, but in the terabyte age that may seem rather pricey. So is the high cost of entry worth it? We we’ll have to find out. 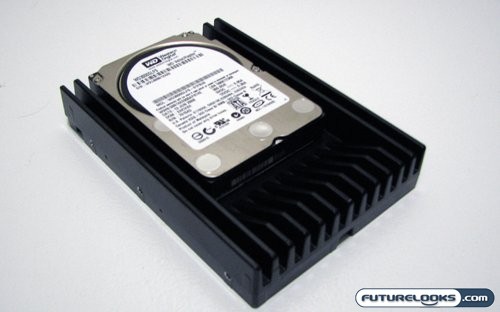 As I mentioned in the intro, the Western Digital VelociRaptor is actually a 2.5″ form factor drive mounted into a 3.5″ frame. This frame, dubbed “IcePack” by Western Digital, doubles as a huge heatsink. Through four contact points on the bottom of the drive, the IcePack helps wick away heat and allows the VelociRaptor run cool and smooth. 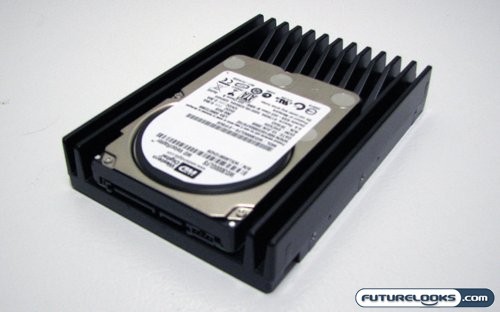 Front to back the drive is essentially the same size as a standard 3.5″ hard drive. It also has the same heft thanks to the added heatsink. The IcePack is removable, but doing so will void your warranty. Since Enterprise Level 2.5″ SAS drives are already running in dense servers without added cooling, I can only surmise that the IcePack is more of an adapter than an actual aid to cooling.