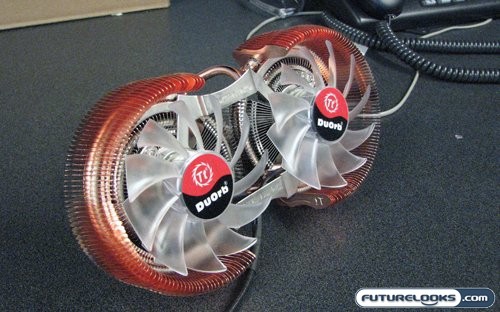 The Thermaltake DuOrb CPU cooler is fairly large, combining two fans mounted on dual radial heatsinks. These two heatsinks have fins made of both aluminum and copper. This aides in cooling, as the aluminum pulls the heat away from the CPU quickly, and moves it to the copper where it is evenly dissipated just as quickly. The fins themselves are quite thin and plentiful, creating a lot of surface area to further increase cooling. The detail work is similar to another heatsink that we’ve tested in the past called the Thermaltake V1 which sports the look of an oriental folding fan. 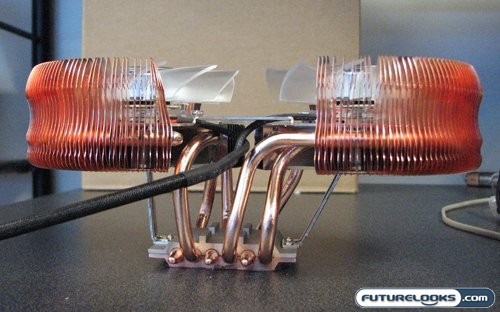 The height of the heatsink has two benefits. The first being that once the heatsink is lifted above the motherboard, to where it clears all the supporting electronics around the CPU socket, it can increase surface area up to the limit of the size of the enclosure used in the system. The second benefit is that the fans should cool the afore mentioned supporting devices around the CPU. This means the CPU cooler should also aide in cooling the northbridge, VRM, RAM, and possibly the back of your video card. 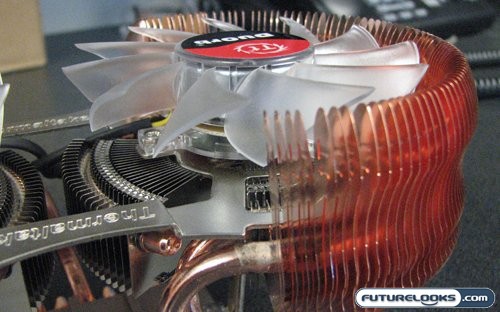 The fans themselves are 80mm in size, and spin at 2000 RPM. Each fan produces 38 CFM of airflow, and produces 21 dBA of noise. Each fan lights up a different colour, with one illuminated in a cool blue and the other ignited in fire red. The entire contraption weighs 598g. 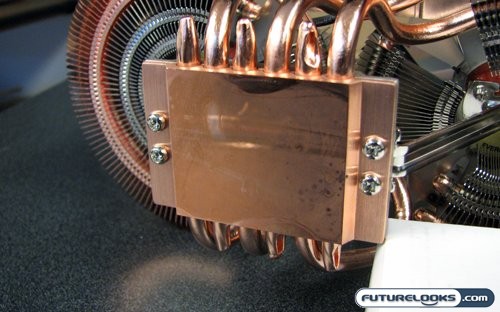 The base of the DuOrb is supposed to be a mirror finish. However when we removed the protective cover from the bottom of our review unit, a film was left from the cover. This is easily removed using some rubbing alcohol, and once cleaned off the copper is indeed polished to a brilliant mirror finish. 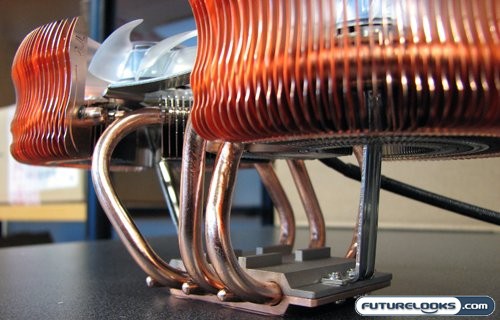 Heat is transferred from the base through six heatpipes into the fins of the DuOrb cooler. This is what allows the DuOrb to raise itself above the motherboard. That being said, the mounting brackets used to hold the heatsinks to the base may interfere with the stock installed passive heatsinks found on the components of many motherboards. We’ll have to see how well it fits with our test motherboard.