While the laptop was associated with the RT2600ac, it was able to obtain 474 Mbps with 5 GHz.

Associating with the RT2600ac on 2.4 GHz and it was able to obtain 84 Mbps on the single channel.

Next up is testing the MR2200ac that is in the back office. I ran the laptop from the same room the MR2200ac is in for both 5 GHz and 2.4 GHz. Here the RT2600ac should not be in play as the data connection goes from Laptop to MR2200ac to the switch to Desktop. I could confirm this by checking Synology’s SRM and Wi-Fi Spot as it tells you which devices are connected to which wireless unit. The proximity of the laptop to the MR2200ac (less than 3 feet), can potentially overpower the Wi-Fi. It can cause bandwidth issues, but from the transfer speeds seen and being similar to that through the RT2600ac, it indicates everything is flowing smoothly.

That leaves the upstairs MR2200ac left to test. This MR2200ac is on the second floor above the RT2600ac and probably about 20 feet in front. I had to disconnect and reassociate a few times to ensure that the laptop was associated with the MR2200ac and not the RT2600ac downstairs. Again, I could check the Wi-Fi Spot on SRM to see which unit the laptop was associating. iPerf was able to obtain the same numbers as the other locations over and over again.

When testing the MR2200ac as a stand-alone router, I set it up like any other router I have used. I placed the MR2200ac in a room relative to the centre of the room in which it would see use. I create a single Wi-Fi network and then put it through regular everyday use. 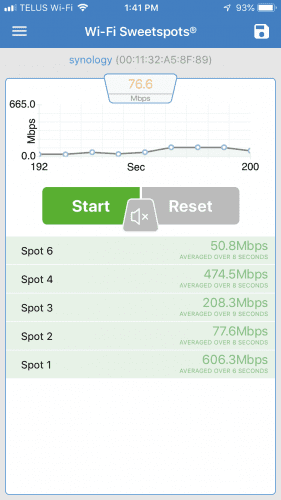 To see how well the MR2200ac could handle being a single router in the house, I walked around with the Wi-Fi HotSpot app and took data transfer measurements in the various rooms. Right in front, the iPhone was able to transfer up to 606.3 Mbps. As I walked around into and out of places, the data transfer, of course, would fluctuate. Overall, the transfer rates were what I would have expected, based on where I was to the MR2200ac. The variables include any building materials and structures between myself and the MR2200ac.