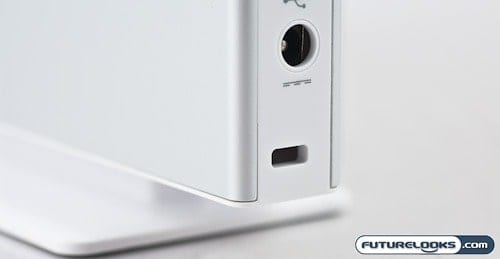 If you’re paranoid about your backup drive going missing Seagate has included a slot for hooking up a lock. I’ve never seen this on an external drive before so I was both surprised and happy to see this. Along with FileVault in OSX, you could ensure that thievery takes place elsewhere. 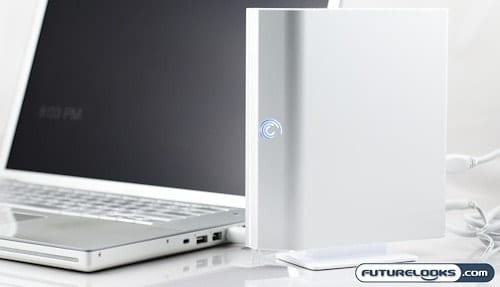 I think it’s safe to say that Seagate has succeeded in creating a product that pays homage to Cupertino. There’s no mistaking that aluminum casing with the “iPod White” accents for being anything less than a product made for your Mac. It even has that pressed together screwless look ala Mac Mini. Seagate has even succeeded in bringing that signature white LED glow to the logo etched into the drive. The light even spills out onto the stand from below, making the FreeAgent Desk for Mac look like it’s floating in the middle of nowhere.

Performance wise, the drive puts down some extremely good numbers thanks to the 7200RPM spindle speed and the high density platters used to create 1TB of storage goodness. Since the performance is so close to the internal drive of my MacBook Pro, I could probably run OSX right off this drive and not even notice any performance penalties. In fact, since the drive I’m using right now is one of the fastest non Solid State 2.5 inch drives on the market, the Seagate 7200.4 500GB notebook drive, the speed would be even more noticeable for users with a stock 5400 RPM drive in their Macbook Pros. This product would be truly ideal for any MacBook Pro user doing lots of video editing. 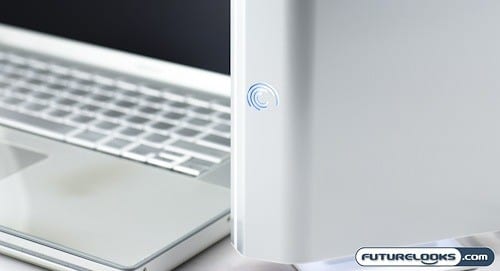 While making it “Mac Like”, Seagate also took the time to do little things like add a security lock slot into the back of the drive so it doesn’t become an easy target. They also shrunk down the size of the power adapter instead of sticking us with a generic power brick. The only thing missing are those latches that pop out to allow you to wind the cord around ala MacBook power adapter.

With the FreeAgent Desk for Mac and the previously reviewed FreeAgent Go for Mac, it’s pretty clear that Seagate takes the growing Mac market seriously and I expect that they will be growing this orchard of products quickly. I gotta say, this is probably one of the best non-Apple designed products I’ve seen so far. Even if it is only a hard drive in a box, albeit a very slick looking one.