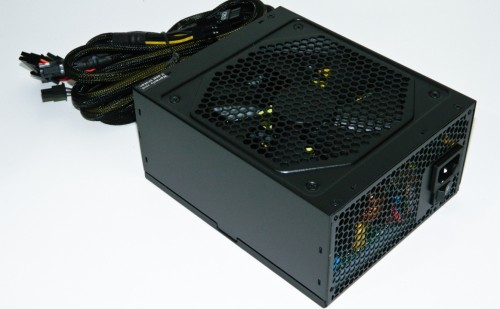 The unit was monitored with an o-scope complements of some aerospace colleagues and placed on an artificial load circuit. This will test 25%, 50%, 75%, and 100% loads as well as report voltage rail levels, fluctuations, and ripple. A secondary mini test was conducted with a system using the following components simply to corroborate the lab findings:

Our operating system was Windows 7 professional and pushing a little overclock helped to see how the PSU communicated with the motherboard. Keep in mind some users don’t care too much for this method since the motherboard(s) may not always report voltages properly. However, I have yet to see the P9X79 Deluxe come up short in this area as it is nearly dead accurate.

The objective is simple here. The PSU was loaded down three different times at idle (20-25%), 50% load, and 100% full load to stress the life out of each voltage rail. Efficiency is also included with each stage as well. And, ripple measurements are included at full load. The lower the mV, the better the power supply. 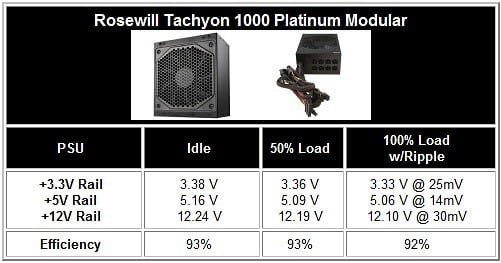 After the electronics smell dissipated, the unit maintained very good rail voltage output. At full load, the unit managed to very admirably control ripple. This is somewhat expected given that only the best Japanese capacitors, higher end rectifiers, and extra MOSFETS were used in its assembly. Finally, the unit is 92% efficient when flexing out 1000 watts. In fact, the unit exceeded 1100 watts while still maintaining just about 90% efficiency.

During testing the Tachyon’s fan RPMs seemed a little sporadic which I would attribute to the ambient temperature. It’s not really a big deal but a little tricky getting the right results. The noise levels here are the highest experienced with a comfortable 72 F (22 C). In the end, these noise levels are expected especially from higher wattage power supplies. However, over the noise of a high end system, it’s not so much of an issue, but it is worth mentioning if your system goals are for silence. 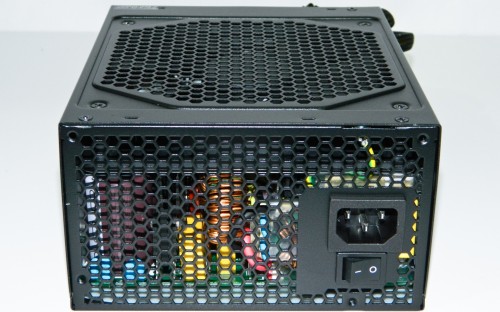 It’s often interesting to see OEMs using different plants to manufacture their power supplies. Rosewill used ATNG for their lower wattage 550-750 Fortress Platinum and Super Flower for their Tachyon 1000 Platinum. While the Fortress fit the price tag, the Tachyon could use a couple touch ups in regards to the extra internal surge protection and maybe a bit of silicone (or screws) to stabilize the fan controller board as a preventative measure for long term performance. Granted, everyone should be using a surge protector anyway because things like lightning strikes can destroy anything in its path, regardless of preparation.

Ultimately, the Rosewill 1000 Platinum boasts a very capable internal power plant offering 92% efficiency and providing very clean power even if it’s over a single rail. A standard 5 year warranty should appease power users especially given it’s $239.99 retail price tag, which makes it just about the most affordable 1KW modular power supply available. And we would assume that any manufacturing defects created by the points mentioned in our inspection should/could be ironed out by the length of the warranty as well.

All things considered, even the not so apparent internal shortcomings, the Rosewill 1000 Platinum is still a very well made power supply unit and comes highly recommended by us at this price.