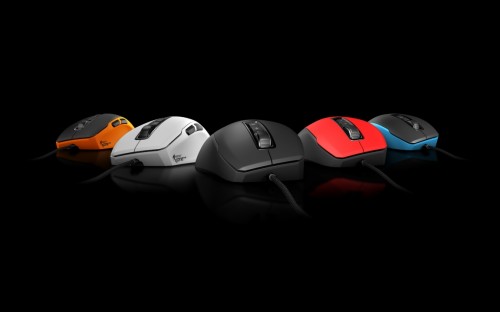 I love it when companys celebrate some kind of anniversary. They always have some kind of special edition of their more popular items. It is one of the few times a company will truly cut loose and ignore regular conventions for a given product. This year ROCCAT is celebrating their 5 year anniversary with the Kone Pure Color which comes in, you guessed it, a lot of new colors.

Are you looking for a mouse to perfect match your system that isn’t black? Well ROCCAT Kone Pure Color will be perfect for you as they have three new styles beyond the black and white versions. The Inferno Orange, Polar Blue, and Hellfire Red will be limited edition Kone Pure Color with a 8200 DPI Pro-Aim R3 laser sensor and Omron switches. They of course support ROCCAT’s signature technologies such as Easy-Aim,Easy-Shift[+], and ROCCAT Talk.

It didn’t take long for ROCCAT to make a name for itself among gaming peripherals and they continue to look forward with new innovative technologies for gamers. 5 years doesn’t seem like a long time, but it is when you consider the market they compete in. Well here’s to ROCCAT’s 5 year anniversary and some great special edition gaming mice with more color options to come. More details in the press release below.

28 – May 2013 – ROCCAT today announces the availability of the Inferno Orange, Polar Blue and Hellfire Red variations of the limited edition Kone Pure Color. Like the original Kone Pure, the Color edition features a high-end 8,200 DPI Pro-Aim R3 laser sensor and high quality Omron® switches. With features like Easy-Shift[+]™, Easy-Aim and ROCCAT Talk®, the Kone Pure Color is a powerful weapon in the hands of gamers fighting for point-streaks, lanes and bases. It is one of a series of limited edition products that will be released over the course of 2013, which marks the “Year of the Kone” – celebrating the five-year anniversary of the Kone series. The Phantom White variation of the mouse will be released later in the year, as well as other limited edition products.

5 years later, known for its powerful performance, the Kone series is one of the most successful gaming devices in the world. Although the Kone series has set new standards for gaming mice, the evolution will continue, releasing more special editions to look out for in 2013!