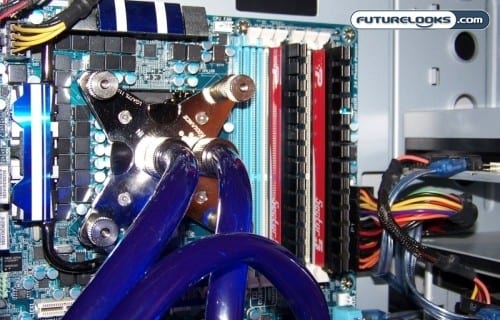 First, we’d like to note that the memory ran perfectly using the kit’s Xtreme Memory Profile (XMP). We also did a little testing with lower frequencies using more optimal memory timings. The kit maintained 1333MHz CAS6, 1600MHz CAS6, 1800MHz CAS7, 2000MHz CAS8, and 2400MHz CAS9 without issue. The kit was almost stable at 2000MHz using 7-8-8-30 timings at stock voltage. You’ll have to add a little more voltage to get it stable though.

Using auto memory settings on this particular test motherboard resulted in configured memory at 10-9-11-30 at 1333MHz. This produced random instabilities. Without any other XMP profiles besides the one which sets it to 2400MHz, you’ll more than likely have to manually apply some timings under CAS10 to satisfy the needs of your motherboard. It’s not the end of the world, just something you should be aware of.

Memory best supports software that uses large data files. Applications that use such files include Adobe CS4/5, Photoshop, and any other video/photo rendering applications. To give you some visible memory bandwidth results, we’ll start with the synthetic benchmarks which include Sisoft SANDRA and Everest. Then, a very large panoramic graphic rendering will be used to show us some more real world performance. We’ve also included results which show off a low latency configurations for users that may not be able to hit the higher speed, but could gain from tightened timings. 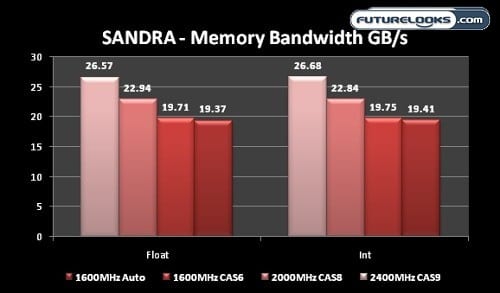 For educational purposes, we included a 1600MHz frequency using CAS 8 and CAS 6 timings so that you can better see the benefits of better timings. Better timings will basically help speed up your system’s processes as well as benefit large data files. What you really get to see is the bandwidth on tap for your processor as the memory scales to its desired XMP profile. A few more points and it might break 27 GB/s. Yes, that’s 27 GIGABYTEs. 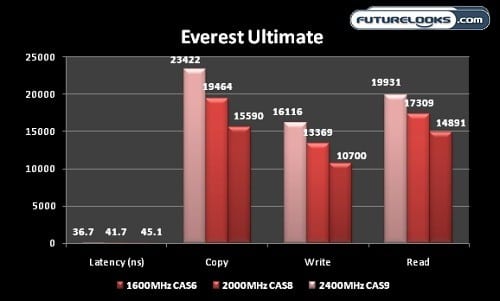 As you can see, as the memory scales well up to its god like frequencies. Everest performance seems to increases exponentially. Again, this is one for the Futurelooks record books.

If you want to see how quickly your system fills up and utilizes your memory, try downloading a large, high resolution photo or video project and do some manipulations then render it. In this particular case, a 30MB high-res photo was placed on a 48″ by 15.3″ banner. Then, the banner was opened with MS Publisher. 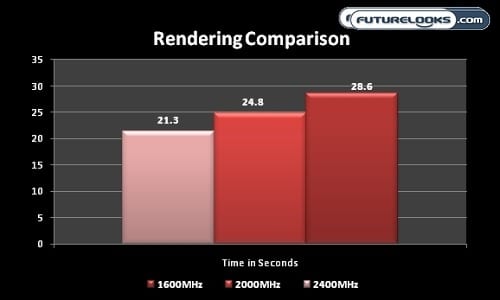 As you can see here, it takes the powerful Intel Core i7-870 processor some time to render the large photo depending on the memory frequencies. Each incremental frequency step knocks off a little bit of time. Suffice it to say, the extra bandwidth gained at each step helped out and if this were a full time production house, hours could be saved on client projects.