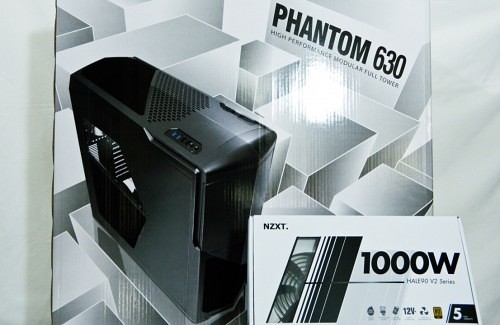 Companies like NXZT offer a wide variety of computer enclosures and power supplies. We’ve seen the contemporary H2, artistic Phantom and professional Switch 820. All of which offer a very enticing array of standard and sometimes unique features. Sometimes though, it’s not always about offering a unique feature but who can implement them better. Today, we’re looking at the NZXT Phantom 630 enclosure which is a nice revision to the tried-and-true, award winning, Phantom 820, but with some improvements that make the two cases distinctly different.

The HALE V2 1000 also has a new Multiple Intelligence Ability Controller: MIA IC feature that monitors the power going down each rail and cable to make sure they are optimal. We had a great little video interview with NZXT at CES 2013. The video is worth the watch especially if you like NZXT’s curves.

Complementing this coveted beautiful exotic is NZXT’s HALE90 V2 1000 Watt 80Plus Gold efficient modular power supply in white which we’ll also be taking a look at today. Coupled with the Phantom 630, we’ll see if the HALE90 V2 1000 truly can handle a massive power hungry gaming system and if the combo can stand up to stringent system integrator and enthusiast standards. 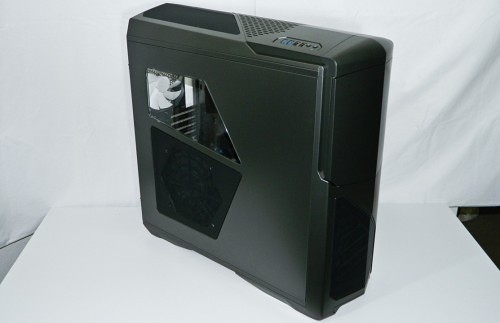 The Phantom 630 is basically a barely smaller version of the Phantom 820. The 630 has similar attractive venting all around including placement and orientation. However, the 630 takes most of those elite 820 features and compacts it in to a smaller mid tower. There are also a number of improvements in the case that make it “better” in many ways over the Phantom 820 from a builder’s perspective.

Here is a breakdown of the key features some of which are really helpful in building your own custom system.

How many cooling fans are included and how big a case is this? The following specification screenshot from NZXT breaks it down for you. 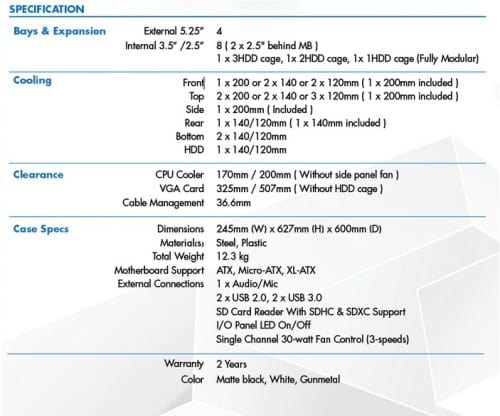 Basically, the Phantom 630 already comes with all the necessary cooling fans to ensure plenty of quiet air flow. Of course, it has the potential of moving upwards of 180 plus cubic feet of air per minute and more if you add extra fans. Or, should you want to add some water cooling, there’s space at the bottom and top. Basically, there’s just enough room to add enough radiators to liquid cool a quad SLI or CrossfireX gaming system. 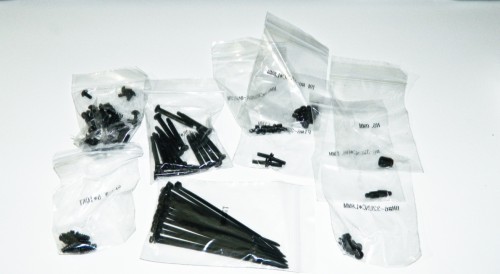 There are plenty of screws should you need them for anything related to the motherboard and extra peripherals like for the SSDs. There’s extra standoffs for the XL-ATX boards if needed. Otherwise, the tooless hard drive trays eliminate the need for a lot of extra screws. However, NZXT does include some longer screws for mounting fans and radiators which is really cool. The manual explains mounting a regular or water cooled system relatively clearly.

Let’s check out the power supply next… 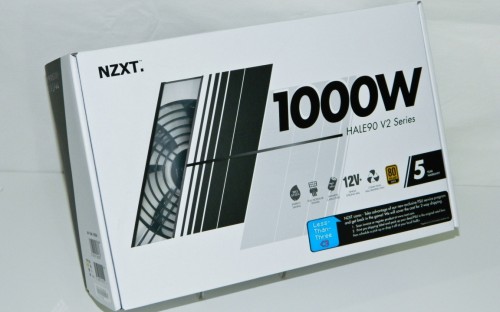 The signature white HALE90 V2 1000 is a completely modular power supply including the 24pin main power connector. With the exception of the aforementioned two, the cables are flat black rather than conventional round with braiding. Each of the PSU’s connectors are in fact quite secure. The internal components are cooled by a large 135mm fan. The previous 1000-M PSU was rated from 14dB up to 30dB at full 100% load but the specs aren’t noted for the V2 1000. Even if these PSUs share similar rated fans, that’s not too bad really since most high performance video cards that this PSU supports are almost certainly much louder than it when maxed out.

The PSU is of course 12V ATX v2.31, EPS v2.92 compliant which is ideal given the latest Intel and AMD motherboards offered by partners and their power requirements. A single 83 Amp 12+ volt rail provides the bulk of the power to your system. The +3.3V and +5V rails provide 30 Amps each which is more than plenty for charging your smart devices if your motherboard offers USB charging ports. 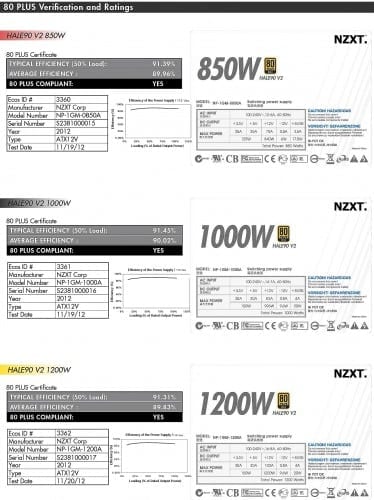 The PSU is at least 87% efficient at all times. However, I commonly see these 80Plus Gold PSU operating at around 90 to 92% efficiency under 50 to 70% of operation capacity. Internally, two Nippon Chemi-Con 400v 470uF capacitors keep power readily on tap. The PSU utilizes the proper controllers and switching components all cooled by decent sized heat sinks. Good quality plant components won’t need as much aggressive cooling which should be the case here. The PSU has over voltage current, power, under voltage and short circuit protection. And, in case you’re wondering, the V2 1000 was assembled in FSP’s factory instead of SuperFlower like the 1000-M.

Overall, this is definitely an upgrade over the original HALE90 series which was only known for its white paint job. The HALE90 V2 1000W will run you about $229 US at most major retailers.