All Around the Exterior 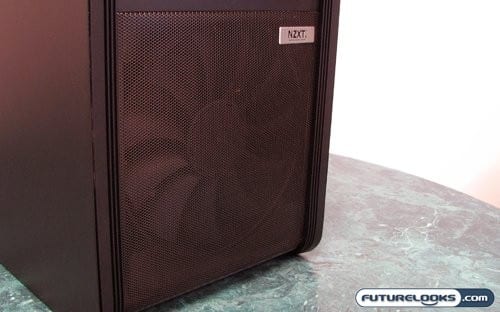 From the beginning you’ll notice the Panzerbox is a rather short, fat case. It’s not unlike a tank, which I’m sure served absolutely no inspiration what so ever for the name of this case.

Sarcasm aside the reasons for the wide stance on this case are two-fold; it has very big fans and a non-standard power supply mounting point. The fans themselves are 190mm wide, and produce 150 CFM of airflow at full speed. They are actually rather loud at full tilt. Thankfully these fans are 3-pin models, so if you have a controller that can handle the amperage required (most modern fan controllers can do so without issue) you can dial these fans down. 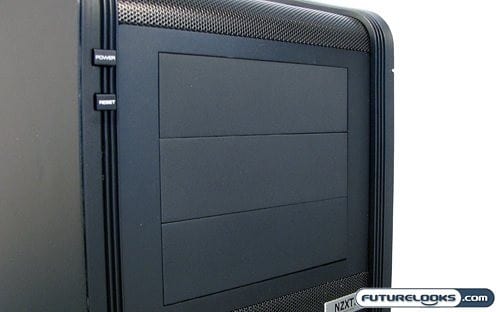 As for the height of the NZXT panzer box, that is attributed to both the now seemingly popular power supply mounting location and keeping the number of drive bays low. It’s actually been a while since I looked at a case that didn’t have at least four 5 1/4″ drive bays. In other cases that might be a bad thing, but in the Panzerbox its nothing but good. This is meant to be an portable LAN box, and as such only needs a few external drive bays. You can still easily fit a two drive optical array, or a single drive and huge fan controller.

Either way the case gives you enough expansion for most needs, with more available on the inside. 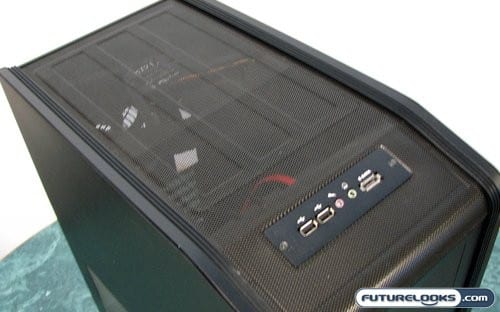 The top of the case isn’t very exciting, except for the fact that it isn’t a solid piece of aluminum. Instead NZXT decided to take the same mesh that allows the front fan to have so much air to flow, and cover the entire top of the case in it. This of course has the same air flow enhancing effects on the top of the case, but also gives a birds eye view to the interior of the case and to components within.

You could actually pull off a very neat effect with this case by installing a couple cold cathode lights and letting the ambient light shine out of all the vents and mesh. 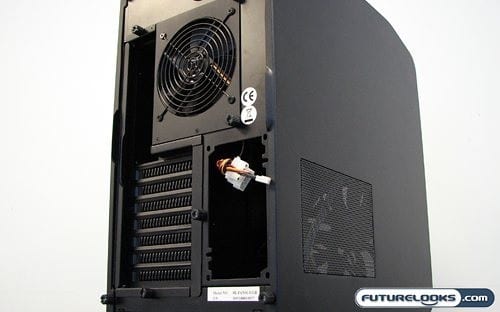 The back of the Panzerbox finally reveals this power supply mounting location that everyone is talking about. This case accepts standard ATX power supplies, but they are mounted in a way that is both retro and modern. Since a contradiction in terms like that requires explanation, I’ll refer you back to the original ATX cases that started trickling out in the late 90s.

The “standard” at the time (it was more of a loose guideline) was that the power supply was mounted directly above the CPU socket. This saved loads of space, but caused loads of headaches as CPUs required more cooling and heatsinks and fans got bigger. A new standard emerged, and power supplies started being mounted at the top of cases above the motherboard. The rest is history as far as that’s concerned. This new power supply mount seems inspired by those old cases, and the extra cooling provided by the power supply fan would seem to help airflow.