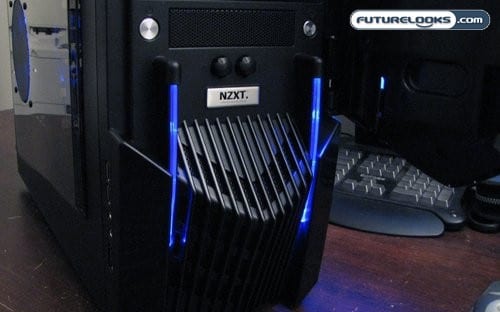 Behind the door on the front of the NZXT LEXA S case we of course find the drive bays; four 5¼” bays and one 3½” bay to be exact. While the drive bays are obvious, there’s a couple of nice surprises in the form of two built in fan controllers. Each dial is a single channel, but together the two dials can be used to control all the fans within the case. As for fans, one of the four included 120mm fans sits in the front of the case behind a build in metal grille. 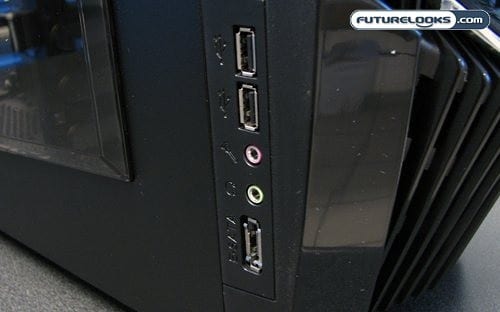 Moving around to the side to the left of the front fan you see the external ports NZXT has installed. As I noted earlier cases have come a long way, and ports like this used to be a luxury. Now there almost ubiquitous to the point where a case is criticized if it doesn’t have external ports. NZXT has provided a decent selection, with only an FireWire port missing. FireWire isn’t as widely used as some of the other ports shown (hate mail from FireWire supporters in 5, 4, 3, 2…) so the lack of one up front isn’t surprising. 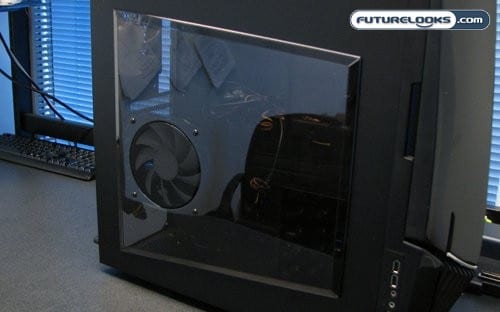 The side panel on the LEXA S has an acrylic window built in, with a side mounted 120mm fan. Rather then perfectly clear, the window is smoked a dark grey. This masks the interior a fair bit, until you turn on some lights if you have them install. Once lit up the window becomes much easier to see through. The fan mounted on the window shares the same specifications as the other fans on this case, with added aesthetic treatment in the form of blue LED lighting. 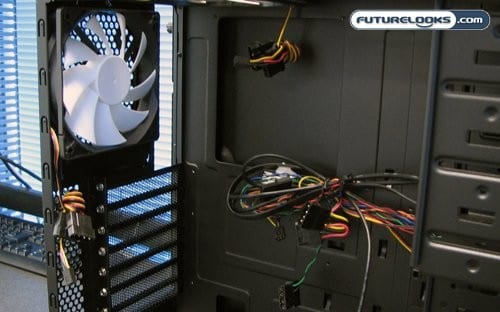 Opening up the case, we find that the interior on the NZXT LEXA S is not the usual grey you come to expect from many sub-$100 mid-tower cases. NZXT have notched up the visual aesthetics by painting the interior black to match the exterior. The motherboard tray also has a large access hole in it, so you can have access to the rear of your motherboard for removal and installation of any aftermarket CPU coolers. There’s plenty of ventilation for hot running components, with vents below the fans and all the expansion slot covers being made with a metal mesh. 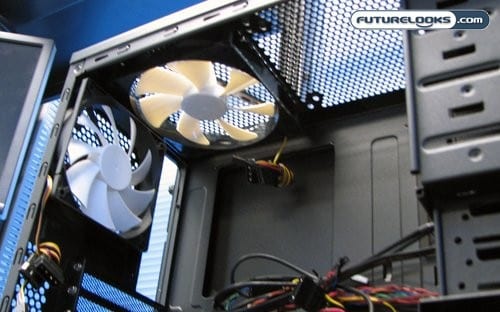 When it comes to active ventilation, NZXT also made selections with an interest in keeping things as cool and quiet as possible. There are three 120mm fans found within the case; one in the front, one in the rear, and one on the side. The roof of the case sports something a little bigger; a 140mm fan. The fan mounts on the roof will also support 120mm fans, though the spacing between them may make mounting a water cooled radiator (I know some of you were think about it) rather difficult.