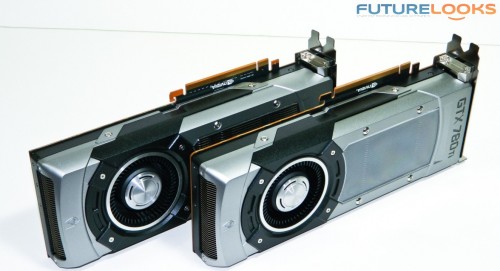 The test bed is pretty straight forward with the components listed below along with the driver revisions we’ll be testing with. As far as settings, we’ll be using extreme settings whenever possible and maximum Tessellation. No platform boost frequencies are being used except where the video card is concerned. GPU Boost 2.0 is a feature and we’ll darn well use it!

For all testing, we’ll still be on Windows 7, so some improvements in performance may still be available from an update to Windows 8.1, which we’ll be changing to in the New Year. A secondary system with the same CPU, similar motherboard, memory, and software configuration was used with a single Titan video card as a direct comparison test bench. We are using the latest drivers as of the writing of this review (331.65 WHQL).

The 3D display on the test bench is the ASUS VG278 monitor with integrated 3D sensor (reviewed here). Like many of ASUS’ premium monitors, NVIDIA NVision 2 comes bundled with the monitor. Chances are that you’ll find yourself playing for hours as if you weren’t even wearing the glasses as recent improvements have really made the technology great.

Now that we’ve got the systems assembled and ready to go, we’ll start off with the first salvo of synthetic benchmarks.

Once again, the round of benchmarks provided the opportunity to play some games and learn what the GTX 780 Ti is all about. Settings are noted in each benchmark. Keep in mind that the AMD HD 7970 doesn’t support Physics so the score is based on the disabled feature. Honestly, I didn’t notice playing a graphically intense game like Metro:Last Light which simply looks immaculate on the AMD card.

Starting with the staple synthetic benchmark, I ran the cards through in 720p Performance mode. The GTX 780 Ti actually shows its processing power quite visibly. It spreads even further with a bit of overclocking. Unfortunately, I didn’t have the benchmark installed on the secondary Titan system. At any rate, this is a pretty darn good score. 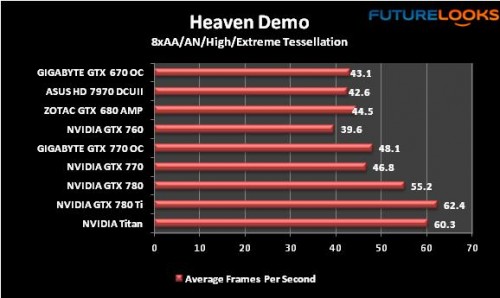 Heaven is a free to use DirectX 11 benchmark that works any GPU to its limit. I expected the Titan to do better but it seems that graphics favor the 780 Ti more. Still, it’s something to behold when the benchmark moves so smoothly. Anyone with a lower end GPU will understand this concept. We call it the “butter” moment.

Let’s move on to the real world gaming benchmarks. 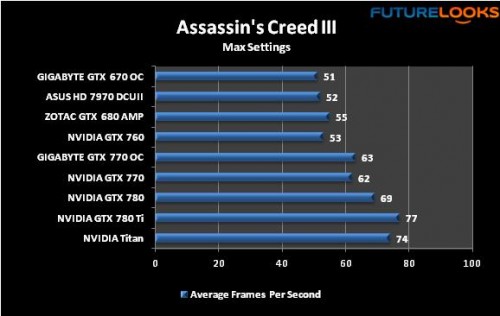 All of the video cards presented a very crisp pirating experience (Arr…). However, the two top dogs really make it easy to catch all the finite details happening in the game. This is where the GTX 780 Ti truly seems to excel. The picture is immaculate as well. 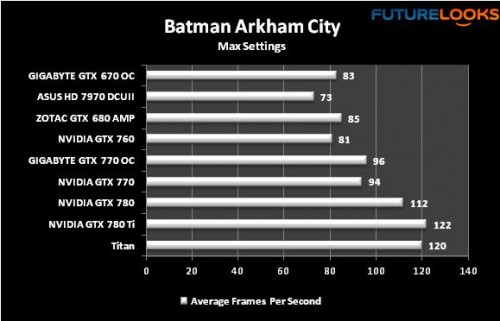 Batman, Batman, Batman! There’s nothing like a good raw game where you get to kick sociopath or psychopathic butt. The GTX 780 Ti just tops out in epic frame rate territory. And, most of the cards love the physics. I would even think that the Ti can operate this game in surround mode (3 screens) and still remain very playable.

Let’s check out some more gaming benchmarks and then take it on home.