Tricks, Bikes, and the Loss of Snaking

Aside from the steering wheel, the three most notable things that you’ll notice about Mario Kart Wii is the addition of mid-air tricks, the introduction of motorcycles, and the removal of “snaking”. 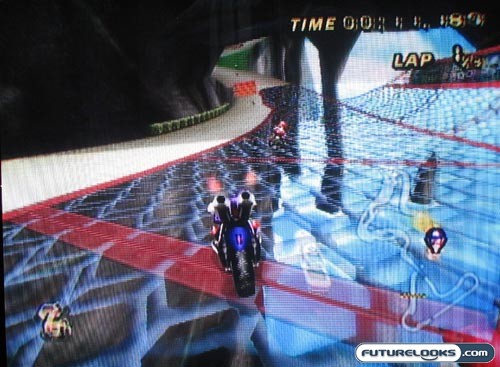 Until now, all the jumps in Mario Kart games didn’t really serve any function. In this iteration, Nintendo added a trick mechanic wherein if you shook the Wii Remote while in mid-air, your character would perform some sort of trick. It could be a handstand, a flip, whatever. Upon landing, you’d get a healthy boost. This adds an interesting dynamic to the game and makes the jumps much more interesting.

The motorcycles are a bit of a novelty, but they’re pretty much the same as the karts. They tend to corner harder and you also cannot get the second level of drift boost with bikes like how you can with karts. Also, if you tilt the Wii Remote upwards, you can get a bit of a boost by popping a wheelie. In the end, I think I still prefer the handling of the karts better. 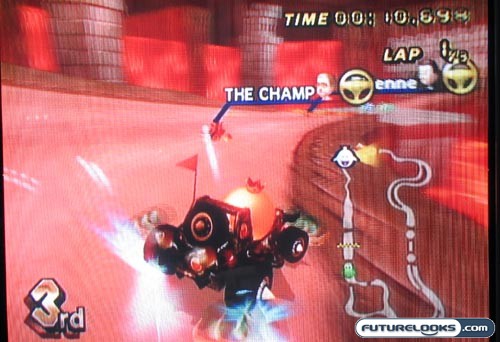 When I first tried going online with Mario Kart DS, I got smoked by a bunch of people that did something called “snaking.” This is when they strung together a long series of drift boosts in a row, even when there were no turns involved. Snaking made it virtually impossible for any non-snakers to catch up. Nintendo removed this in Mario Kart Wii by making the drift boosts “automatic.” All you have to do is hold your drift to get a boost, rather than waggling a joystick left and right. There are pros and cons to this decision, but it certainly levels the playing field for novices. 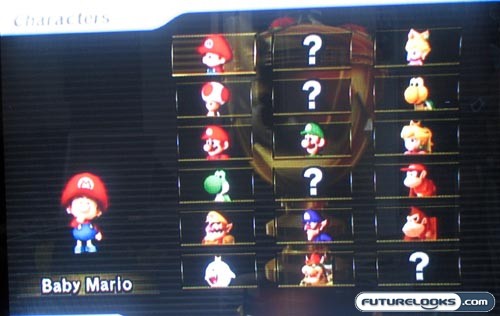 What Nintendo racing game would be complete without a healthy compliment of Nintendo characters? Just like you got to experience on the DS version of the game, you have an opportunity to unlock a number of characters, karts, and bikes in Mario Kart Wii. The initial roster consists of 12 favorites, including Baby Mario, Yoshi, and Bowser. In the screenshot below, I also show two of the characters I have already unlocked: King Boo and Diddy Kong. 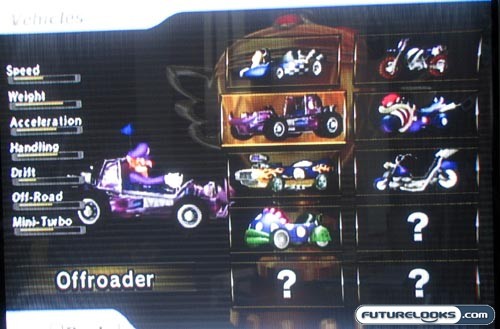 For each character, you also have the choice of several karts and bikes. Most of these vehicles are shared amongst all the characters, usually based on their relative size. All the big guys get the same karts, all the little guys get the same karts, and so on. Small characters even have a baby stroller! Each kart/bike has its own set of attributes — speed, weight, acceleration, handling, drift, off-road, and mini-turbo — so choose the one that fits your racing style.