Quality and Usefulness of Manuals/Documentation 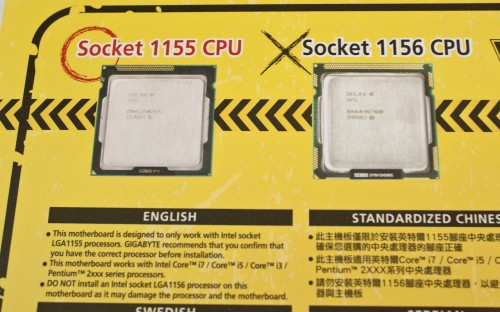 GIGABYTE’s documentation for this board includes a warning sheet for letting users know NOT to plug in their LGA1156 CPU into this LGA1155 socketed board, a Multilingual installation, the main user manual that covers the two sibling boards which include it’s non-mSATA enabled counterpart, and a separate manual that covered Intel Smart Response Technology only which is actually very useful. 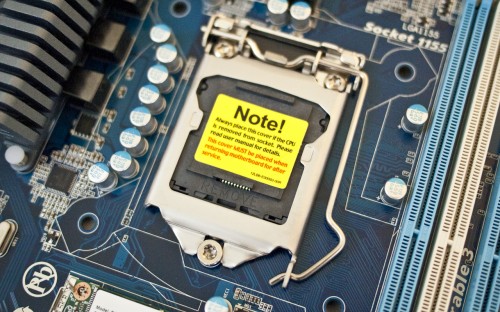 The yellow warning sheet was useful, but it’s another piece of paper that users may nor may not pay attention to. I did notice that the socket already had a warning for the socket cover, but including a sticker around the socket to warn people that this fits an LGA1155 chip and not an LGA1156 chip would actually be far more useful and intuitive. Because someone did think to include a warning sheet in the box, this must have come up as an issue and because LGA1155 and LGA1156 chips do look very similar, it’s better to be safe than sorry. I applaud the effort, but I think it can be done better. 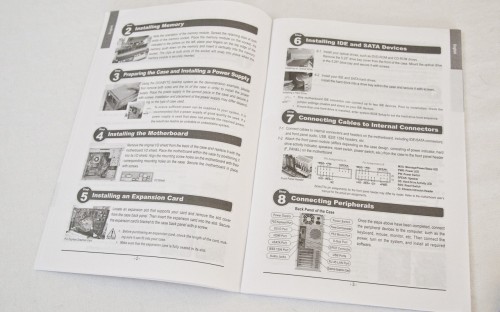 The multilingual quick installation guide is very basic. Far too basic and generic in my humble opinion to be of use to any user working with this specific board. There is already a section of the manual that covers installation in far greater detail, and overall, it does seem very well written, albeit a bit generic. We actually followed the instructions laid out in the setup section in the main manual to assemble our system, but I couldn’t help but get the feeling that they were written for someone using an open test bench or a even on top of the motherboard box. While this is fairly common in a test lab, this isn’t helpful to someone building their system into a case, which is a much more common scenario.

The basic installation guide does go into some case installation steps including the mounting of the expansion cards, but having too many guides can be confusing and I’d like to just see a better section in the manual, written for a case based installation.

Speaking of the manual, skipping past the hardware assembly since we already talked about that (Chapter 1), the BIOS setup in Chapter 2 was pretty thorough, going through every feature there was in the board, but not exactly what it does. As a suggestion, it would be nice to see additional information describing what effect the setting has on the system, turning the manual into a more useful reference guide.

The rest of the main user manual (Chapter 5) are all appendices for some additional options like how to create a RAID volumes on both the INTEL and Marvel controllers on the board. Audio functions are also covered here, but I would think that this would be part of your initial setup and should be included after driver installation. Everything else in the Appendix should be items that can be dealt with after the system is running. 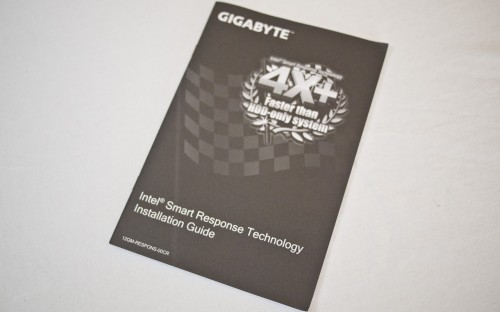 I like that GIGABYTE recognized the importance of Intel Smart Response Technology on the Z68 platform. Along with the other well known Z68 features, Lucidlogix Virtu and Intel’s Quick Sync, it’s truly a great piece of technology that improves anyone’s system performance. The inclusion of the pamphlet goes through most of the steps needed to successfully activate the feature on this board. Most of which is already done because this board has the mSATA slot and SSD built right in so in working with it, you can skip a lot of steps here.

The only thing that wasn’t covered was how to successfully turn on the feature if you somehow setup the drive mode incorrectly, or had your system set to IDE mode. Under these circumstances, turning on INTEL Smart Response would simply end up in a blue screen when you rebooted. While it is possible to turn on the feature manually, which was covered in our original Z68 platform launch article (bottom of page), GIGABYTE put out a value added piece of software, available from their site, called the EZ Smart Response utility, that made the process of turning on the feature just a push of a button.

I thought that the setup on this board was nearly fool proof for Intel Smart Response. However, EZ Smart Response is still a very useful feature overall that could solve some headaches for some users. Especially since the fix before the utility was released was a full  reinstallation of the OS. I’d like to see GIGABYTE do more to support signature features on their chipsets as they have done with Intel Smart Response. I know that Lucidlogix Virtu could have used a few pages in its own leaflet too because of some of the nuances of the setup if you were using a discrete GPU, but wanted power savings and the Intel Quick Sync enabled etc.

The software DVD is often used as a coaster for your drinks. And that’s a low down dirty shame because the DVD that GIGABYTE puts out is actually quite useful. 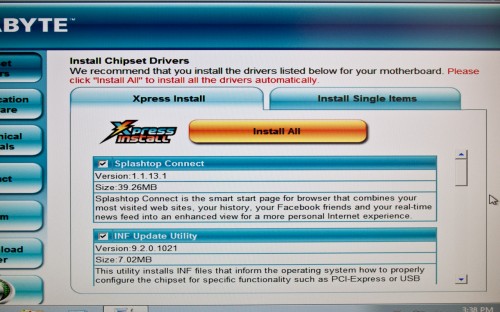 After setting up our system and installing the operating system, our next challenge was to get the system into a basic level of functionality. While many products include driver discs that are no more than a bunch of folders and maybe a fancy splash screen so that you can spend all day rebooting and booting your system to deal with each individual driver install, the GIGABYTE DVD actually gives you a real option to install all the drivers and walk away for a little while. They call this Xpress Install.

We put the disc in and fired up the Xpress Install and all the basic level drivers were completely installed when we returned. We just needed to restart and we were done. There was a prompt to GIGABYTE software goodies so we installed that too and the Anti-Virus as well (your choice of Trend Micro or Norton). After rebooting we found Easy Tune 6 (Overclocking Utility), Smart 6 (System Management Utlity), Auto Green (Bluetooth Security/Power Saving Utility) and Dynamic Energy Saver 2 (power saving utility) pre-installed for us to play with. Since the system has no Bluetooth dongle onboard, and as far as the specs go, nor do the other Z68 boards (with the exception of higher end models), the Auto Green utility was pretty useless. Having it installed, except for maybe the few MBs that can use, isn’t harmful either, however, it can be confusing to some users. 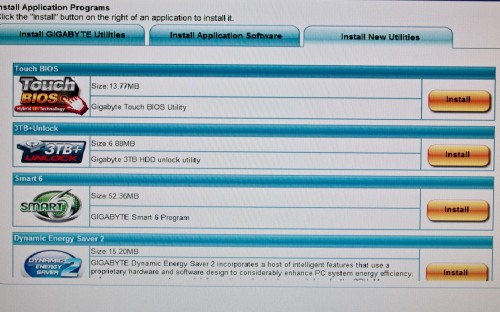 Additional apps and utilities are also included on the disc. Things like the Touch BIOS, 3TB hard drive unlock utility (helps you use the full capacity of a 3TB drive), and the Xtreme Hard Drive (XHD) (allows automated setup of a RAID 0 array by installing two new hard drives) software were some of the more useful options available. The BIOS and Software Update utilities are also recommended installs. The disc itself is also the boot disc for the Xpress Recovery 2 feature which is useful for restoring your system to the pristine condition after your initial setup and configuration.

The only downside to this very useful Xpress Recovery 2 software is that no one actually tells you that you have to leave room on your drive (at least 10GBs) to allow the software to do a proper back up of your system. If many moons ago I was told this, I would have started using this software a lot earlier. It’s actually pretty awesome and lets you completely restore your system to its initial pristine installation, before you messed it up. It’s very similar to what a lot of OEM PC Builders use to get you back to the original software state as shipped with the system.

I actually started using this software a year ago for my standard test system and it’s a shame that GIGABYTE doesn’t promote it more, or as one of the important installation steps in the manual or even the quick setup guide.

So all in all, the software disc on this GIGABYTE board is actually quite useful and a time saver, not quite ready to go into the coaster pile. Now let’s have a look at the effort that GIGABYTE put into their other branded software included with the board.