These connective features are often over looked by many engineers. Here, I look for any SATA, USB, or other IO port connectivity issues. Like all Z77 boards, the UP5 board and Windows drivers don’t always detect freshly connected SATA devices even when using AHCI and hardware detection. Sometimes the BIOS only sees one device when two devices are simultaneously connected to the black SATA ports. Connecting one at a time makes it easy. Also, a quick reboot usually resolves the issue. 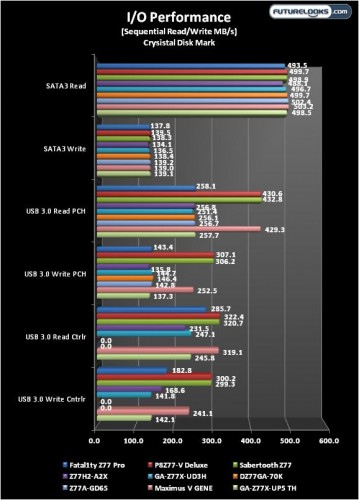 The UP5 utilizes the Z77 chipset for USB 3.0 function and not the VIA VL800 controller like the UD3H. The PCH is a bit slower in that respect. The ASUS boards continue to provide the fastest USB 3.0 performance thanks to the Turbo and Boost feature.

As we have stated, we unfortunately could not locate any Thunderbolt devices that would give us the results we needed to give a good idea of performance. We’ll have revisit this once manufacturers provide a more thorough variety of solutions. If the Thunderbolt port is as sensitive as we’ve heard, the tests should reveal who’s implementing controllers right and wrong. 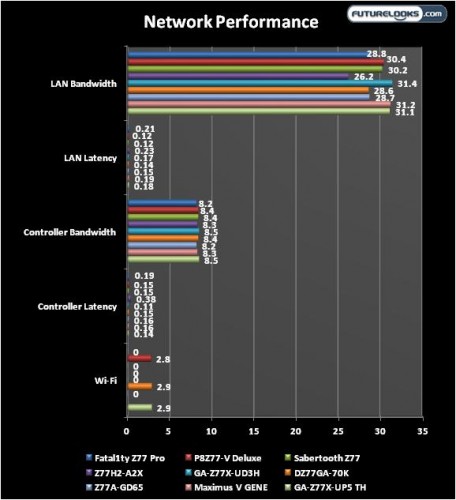 It’s pretty uneventful here. The UP5 doesn’t really come with any extra networking software or reveals any tuning related to networking performance. But it does score relatively well with the onboard network controller plus the bundled and very useful WiFi PCIE card. The connectors are of a ring nut design so they make very good contact with the antennae.

Testing revealed the board to be good overall as far as integrated audio is concerned. Frequency response was less than admirable at 50% volume yet was better if volume wasn’t high. One of the features the GIGABYTE boards have long shown is the 110dB audio. Unfortunately, it isn’t “loss less” and does flatten out at higher volumes. Regular gamers and media users will find it to be sufficient while avid gamers will want something a bit more sinister like the ASUS Xonar series or Creative Labs cards. 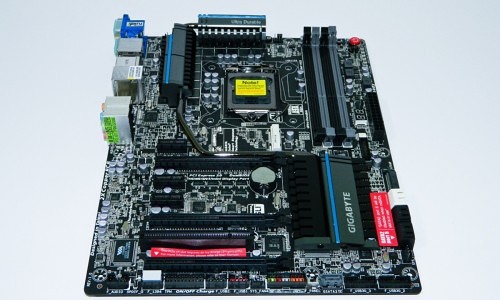 When I first looked at GIGABYTE’s new Ultra Durable 5 technology, it was hard to know exactly how or if it would affect motherboard performance or even benefit the platform in some other benign way. Unless you’re some what aware of how digital VRM works, you probably wouldn’t know it offers conservative power consumption, cooler operations, extended component life, or if it could maintain higher Intel Turbo frequencies. While overall performance is comparable to other Z77 platforms, the GA-Z77X-UP5 TH provides tangible power conservation, cooler components during operations, and a steadier overclocking results.

As mentioned before, we unfortunately couldn’t get properly working Thunderbolt devices to test the unique dual Thunderbolt ports on this board. However, we know it works because Intel has shown it off more than once at shows and in the field. And, as long as GIGABYTE’s engineers followed recommended specs, the ports should move enormous amounts of data in a very short time. Still, we fully intend on revisiting Thunderbolt once the new chipsets launch and more TB solutions give us something to work with. In the meantime, it’s like the waiting we did with USB 3.0 all over again.

Ultimately, the GIGABYTE GA-Z77X-UP5 TH is a pleasant, cool drink of power consumption that will shave off a few watts off your power bill while offering the latest in extreme high performance data connectivity through the latest and greatest Thunderbolt ports. Two of them in fact giving this board potential longevity that  you don’t see in other boards right now at around the $249 US price point.