Rise of the Mini-ITX Systems

Also in my possession was probably the smallest system at the event. There have been similar sized machines in past years, but those were all micro-ATX based platforms still crammed in to a seemingly small chassis. They also weighed in at about the 20 pound mark. This little gem was topped 10 pounds and takes up very little space compared to anything else, making it very easy to take to LAN Parties. 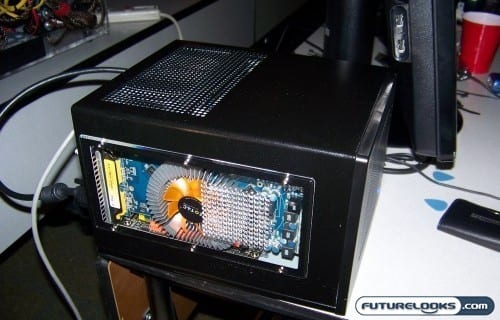 Underneath the Silverstone SG05 Micro-ITX Chassis was an Intel Q9550 Processor, 4GB PC2-6400 Patriot Viper Memory, Zotac 9300 ITX WiFi Motherboard, and Zotac 9800 GT 512MGB Synergy Video Card. Storage duties were provided by a Western Digital Velociraptor 300GB 10K RPM SATA hard drive. This was all fed by an FSP 300 Watt Power Supply. For sanity’s sake, I dubbed it the “Zotac 93X” since it’s easier to say that than the entire name of the board, especially when people keep asking you.

It may look small and not feel like much in your hands, but throw up a game or two of Mirror’s Edge which is a physics featured game and it plays very well even on a 26″ monitor. Even Call of Duty 4 still managed to pull some very playable frame rate averages (60+) as well despite the intense action and mapping.

The possibilities from full ITX powered systems are numerous and a slightly longer chassis as well as a larger power supply could allow one to use a more powerful graphics card around the GTX 280 size. If only we had this capability ten years ago. Most of the back injuries that LAN Gamers received from carrying their systems around would not exist. More pictures of this system are on the next page in the gallery.

Amongst the stash of free stuff were Sentry LX Fan Control Bays and a Rogue Aluminum Chassis sponsored by Futurelooks and NZXT. The Rogue is magnificent little Micro-ATX chassis perfect for an elite LAN gaming system. We had to open the box and get a better look and it is clear that it is all smiles with this chassis. 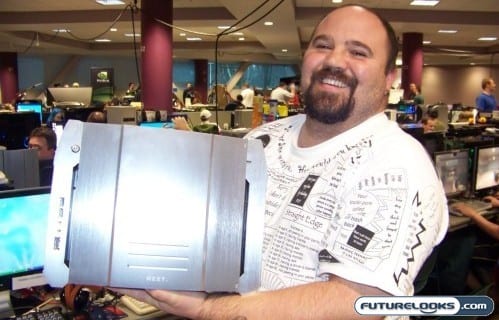 The Rogue is made from aluminum and features excellent ventilation, a black interior, and is surprisingly light for its size. Needless to say, this gentlemen’s friends were jazzed at the thought of using it if he couldn’t. NZXT also gave away one of their Cryo LX Notebook coolers which have been a hit with all the Notebook Gamers out there. 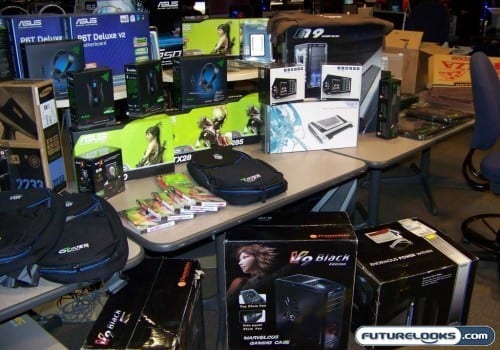 Also being showered onto the adoring masses were a number of INTEL I7 965 Processors, ASUS P6T Deluxe V2 Motherboards, Intel DX58SO Extreme Motherboards, EVGA GTX 285 Video Cards, Thermaltake cases, Antec cases, Mushkin DDR3 memory kits, T-Shirts, Falcon Quiver Bags, and a complete gaming system from Garage Games featured at Instant Action where you can find several browser based games. If you ever wanted a better prize to attendee ratio, this was the event to be at. Where else could you have such great odds of winning a $1000 INTEL CPU? Clealry not at home in your boxers.

As usual, the Intel team did another great job of continuing to make this one of the top LANs to attend in the Northwest. We’d like to extend our thanks to the Intel staff who truly work to make a difference by holding this event for charity as well as NZXT for helping spice things up with some sponsored schwag.