To thoroughly sum up any performance differences between the ITX and ATX platforms, we’re using SYSMARK 2007, Cinebench R11.5, 3DMark11, RightMarkAudio Analyzer, Input/Output performance. Each program was left to their default installation set up so that you can compare your system to our scores. Each platform was tested in 3DMark11 using a single GTX 560 Ti in stock configuration.

Quality Control was done utilizing both our special intuitive senses and a laser thermometer checking for abnormal component temps and odd noises that result from poor implementation. Power Consumption was measured using a power meter from the outlet. Any abnormalities have been noted in the respective sections. 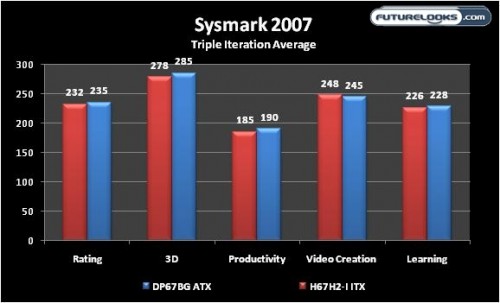 The results aren’t surprising since the P67 and H67 are very close in design. Both perform very closely. However, the DP67BG can overclock where as the H67H2-I simply can’t. The one thing that the P67 lacks is the video out function needed to benefit Sandy Bridge’s Intel Quick Sync feature which the H67 has. Let’s look at one benchmark that uses it next.

Intel Quick Sync is one hell of a feature built in to the Core i7-2600K’s on-die integrated PCIe graphics that makes super quick work of video transcoding. For this test, discrete video cards were removed from the H67H2-I test system. A 449MB video file was transcoded using both test systems. 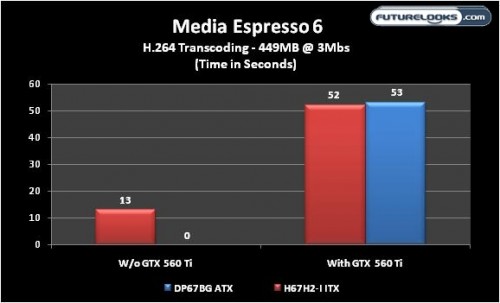 The H67H2-I and the Core i7-2600K IGP completely leaves the DP67BG and its GTX 560 Ti in the dust. Again, this is because the H67 provides the support needed to make use of IQS. The P67 doesn’t support the feature thus there is no score. Overall, this is an extremely tangible performance benefit for anyone wanting to build a media PC and does lots of video encoding for any number of purposes. 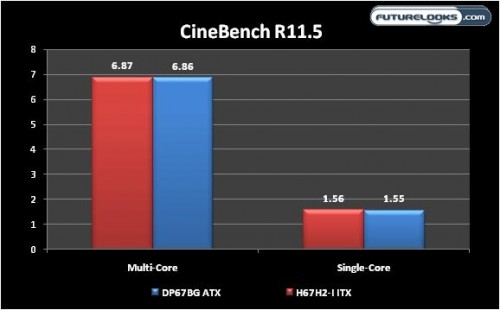 The H67H2-I renders like a pro when it come to CineBench. Intel Turbo holds pretty true compared to its larger P67H2-A2 sibling we reviewed in our round up which was just a tad slower. It keeps up quite well with our retail Intel DP67BG board.

We move on to the performance of the H67H2-I with an NVidia Geforce 560 Ti video card. Remember, this board has a PCI express slot. Check out the performance. 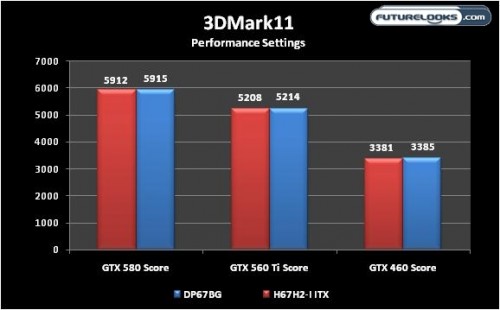 The full sized Intel DP67BG ATX board is just ever so slightly quicker in this benchmark. The great thing about the H67H2-I is that its single PCIE 2.0 slot helps transform the tiny platform in to a full fledged gaming system. Let us show you a game benchmark to drive it home.

This is a free to download demo if you’re really curious just how well your DirectX11 video card can do under a more stressful gaming environment. 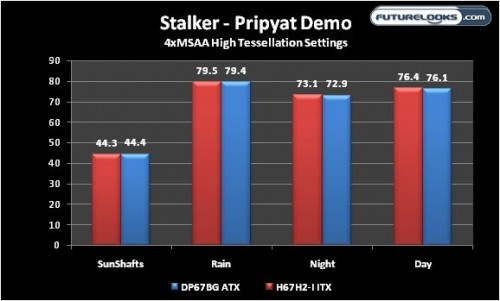 As you can see, both the ATX and ITX have no problems managing Stalker with a capable mid range GPU strapped to it. What’s most surprising is how easily the ECS hangs by the side of a larger sibling.