Setting Up the CORSAIR Vengeance 2000 Headset 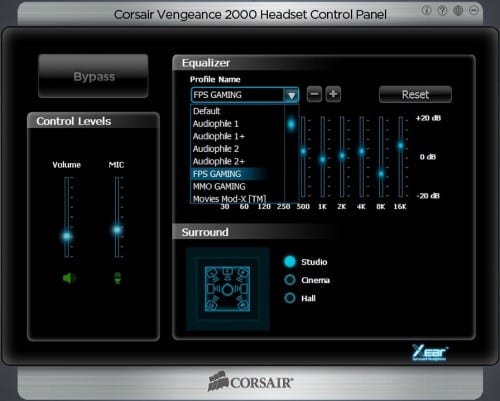 Set up is pretty simple. For best results, the wireless USB adapter should be placed on top of your desk or work space whether plugged in to the patch port cable or system. I found the audio cuts out if the transmitter isn’t relatively visible or if more than 20 feet away which isn’t a big deal even for home theater PC systems. Once you’re connected, simply download and install the software driver from Corsair’s product page and restart the system after installation. Once back in Windows, it may be necessary to press the left ear cup button to activate the headset.

The software contains the audio driver and settings needed to configure the headset’s performance based on your preference. There is a lot of clean bass in all the presets but a couple of the settings have low treble for some reason. Fortunately, users can program their own configurations in the presets. The surround settings show the HRTF positional audio off a bit more. Selecting the Bypass button will remove any effects for a more pure audio experience.

Are The CORSAIR Vengeance 2000 Comfortable? 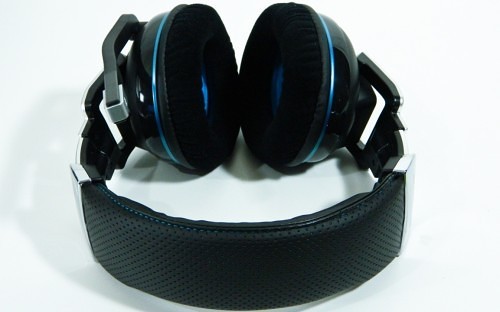 This is one of the top two questions. I’m comparing the Vengeance 2000 against the Tritton AX Pro Dolby headset which once held the top spot in my collection. Headset comfort can depend on the shape of your noggin but there are design differences that ensured the Vengeance 2000 were easily wearable for two hours at a time. The Vengeance 2K have an 8.5 inch padded head band which spreads the pressure out evenly, and helps to negate added weight of a wireless headset. The AX Pro has a 3.5 inch pad which can often create a bothersome pressure point in the dead center of your head.

The Vengeance 2K have round ear cups that don’t put pressure on the ears. The AX Pro are rectangular which does squeeze the ears a bit, and become an issue over time. So overall, CORSAIR has done a fine job of ensuring long term comfort for gaming and for movies. But how do they sound?

How is the Audio Performance?

The audio performance is especially important. For comparison, I’m testing the Vengeance 2000 against the aforementioned Tritton AX Pro Dolby headset. Both are USB powered and support multichannel audio. Note: The motherboard’s integrated audio was disabled and each USB headset set as primary audio source.

Decibel for decibel, the AX Pro and Vengeance 2K put up a serious fight against one another. The AX Pro can get quite loud but some of its individual drivers can quickly max out (when they work) requiring you tune each channel accordingly. Otherwise there is serious distortion that you can hear, which ruins the overall listening experience. The AX Pro often defaulted to stereo in many cases.

The Vengeance 2K stayed quite clear since they have a single 50mm driver which balances power at higher volumes. The HRTF channel reproduction is relatively decent as long as the Surround is disabled, or Bypass turned on. Surround can create too much of an echo further confusing the senses. These are the biggest pros and cons between stereo and surround headsets.

During my recent 24 hour Intel Lanfest Infernalan beat down, the headset held at least an 8.75 hour charge at a time. The volume was often at least 50% which drains the battery more quickly. They took about 30 minutes or less to recharge in between use. Wearing them with the wire connected was a non-issue given the flexibility of the wire. This is a great convenience as you never want to stop the game, even if the batteries are draining. Just plug in the cord and keep going. 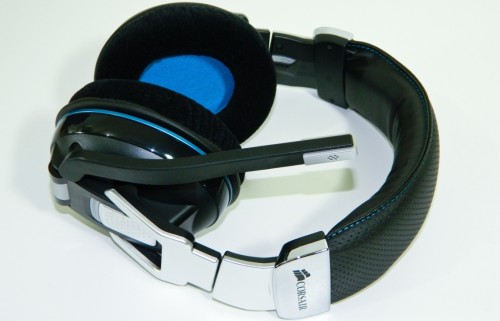 There are pros and cons to both analog and USB headsets. Analog and USB multichannel reproduction accuracy depend on the audio source like an inline USB audio processor, integrated audio (motherboard) or discrete audio card. Analog multichannel headsets rely on integrated codecs or audio cards with multiple wires bundled in to one thick wire, which can often be a point of weakness in terms of wear and tear. USB headets rely heavily on the inline audio processor for sound and use only a single wire that’s quite a bit more resilient. But which is better?

With that said, I’ve had twelve different headsets in the lab and only three remain due to quality control issues like broken frames and/or faulty wiring. That’s the great thing about the CORSAIR Vengeance 2000 Wireless gaming headset. There are no permanent wires to inconvenience or develop issues due to wear and tear. The overall construction is far more substantial than most units I’ve used. While the headset uses a very nice inline C-Media audio processor, the audio channel reproduction will depend on the game title and driver settings selected. So there is some fine tuning to be had before you may get optimal results.

Ultimately, the CORSAIR Vengeance 2000 Wireless Gaming Headset perform similarly to their previous, and still very good HS1. The ear cup rotation could be tightened up a bit as they pivot a little too easily and the USB wires could use a couple more feet for easier setup. However, the audio is quite clear, noise free and most importantly, the headset is wire free which is really what they’re all about. They really give up very little in terms of audio vs. the wired version and the added wireless convenience more than makes up for that.