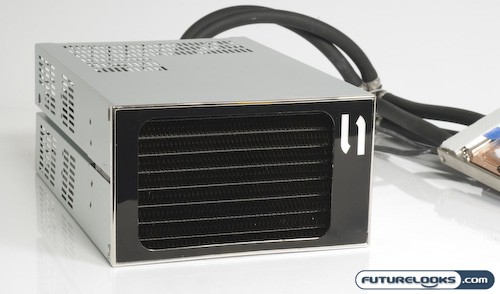 The Dual Drive Bay Unit is definitely true to its namesake. It takes up two of your 5.25 inch drive bays and contains the radiator assembly that can be seen from the front of the case when assembled. This assembly draws cool air through the front of the radiator and exhausts itself into the case. Because this will dump the hot air right onto some CPU coolers, I was a little worried that depending on how hot the air is, this may adversely affect CPU temperatures, but we’ll see. 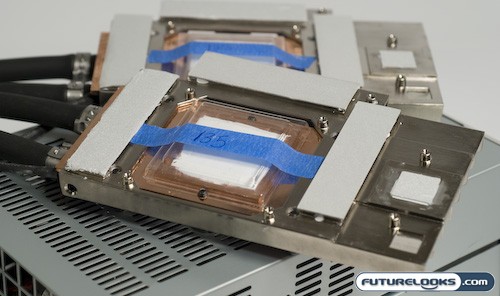 There are two MTEC GPU cooling units because the system is pre-plumbed for an SLI or Crossfire system. If you only have one single GPU, this system isn’t for you. The plates are specifically machined for 8800 series GPUs, but based on the somewhat modular nature of the units, it is possible that CoolIT may release new hardware to allow you to adapt them to future nVIDIA GPUs should you grow out of your 8800 series units.

The GPU cooling units are attached to the Dual Drive Bay assembly with Neoprene hoses. The whole system is hand assembled at the CoolIT factory in Calgary and are totally ready to go out of the box for a seemingly easy installation by the end user. 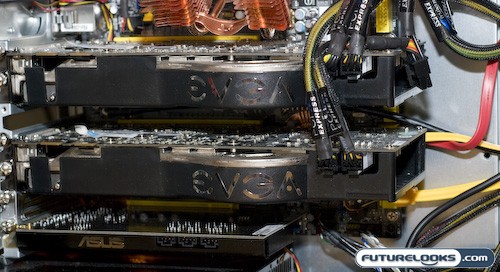 While most people will start ripping stuff apart, I prefer to do a good preparation of my hardware before installing any cooling mechanism. This includes making sure that the hardware is free of dust and debris and that all mating surfaces are cleaned up before applying the heatsink compounds or cooling pads. I hadn’t looked at my 8800 ULTRAs in quite some time and forgot how big they were, even though they were sitting in the cavernous interior of a CoolerMaster Cosmos 1000 chassis. 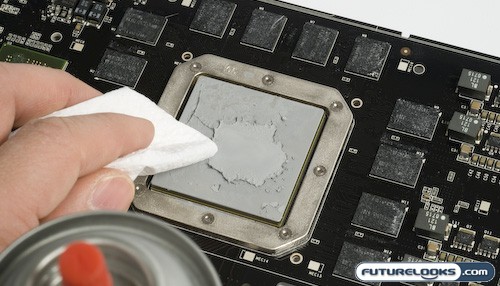 The installation requires full disassembly of the whole existing cooling system that is attached to the GPUs. You’re basically stripping them stark naked down to the RAM and GPU. Video Card manufacturers seem to toss the thermal goop onto the GPU like ice cream so you’ll need to thoroughly clean them off with a soft cloth and contact cleaner. The memory modules are comparatively easier to clean off and prep. You will not be reusing any of the existing thermal goop as the cooling assemblies are all pre-assembled with new thermal tape and thermal goop so make sure you do a good job cleaning. I felt that this was a part of the manual that was not highlighted well enough and should be to ensure optimum performance.