To start the process, Furmark and OCCT were started while the case fans remained unplugged till the internal temps reached 40C which isn’t too high. It took about 30 minutes to reach that temp due to the sheer size of the case and natural heat movement. Then, the fans were powered up for 5 minutes and the temps recorded. 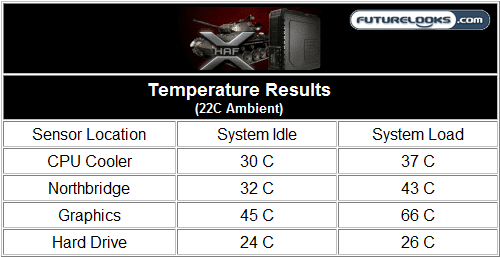 As you can see, the case is able to keep the nuclear system reasonably cool. It’s not the lowest temps I’ve seen in large fan packed cases, but it’s not the highest. At least the graphics area intended to hold some of today’s hottest video cards will get the cool air needed. The nVidia 8800 ULTRA as some of you may remember was legendary for not only the insane price, but also, the insane heat it generated back in the day. It is still one of the hottest GPUs to date. 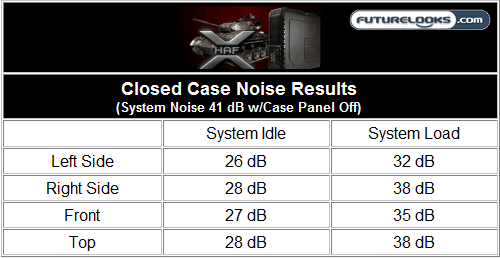 Next, a trusty sound meter was used to record the system noise with the panel open and then with the panel closed. What this does is give us an idea of just how much noise the chassis can block. Due to the cavernous size and materials of the HAF X, there is some echo and a little vibration. And, of course, due to the larger the openings around the chassis, the system noise is able to escape more. Again, based on the theme of the case, that’s to be expected.

I also noticed that the chassis design and fan placement affect overall air flow. The light weight fans don’t seem to move air aggressively despite their size. When testing air flow, it actually seemed like air is being packed in to the case more than being directed. As long as there’s enough cool air filling up the inside, it shouldn’t be a problem. People looking for more performance from the HAF X can investigate fans with stiffer fins and look at units that provide much more directional air flow like Silverstone’s AP Penetrator series which are excellent as intake fans. 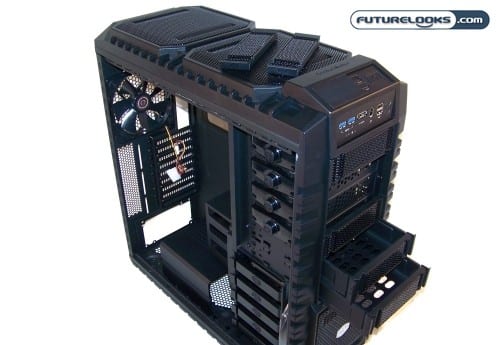 Based on our preliminary preview and our current up to date thoughts and test results, we still feel that the Coolermaster HAF X is not only an attractive full tower sized enclosure, but it has the right characteristics aimed to impress and accommodate enthusiasts and gamers. Whether you’re running multiple extremely hot video cards or not, the case gets the basic job done of providing cooling. Case modders will also enjoy the modular nature of the HAF X, leading to much more creativity in both color choices and modifications. The steel is also very easy to work with compared to other materials.

If heat does become an issue, users can add a fan up top in the empty vent port to guarantee full air flow. As mentioned earlier, users are welcome to use other fans to increase performance. Many options are available on the market and its just a matter of finding the right combination of fans. Cooler Master clearly did what they could at the $199 US price point, but if you’re willing to go nuts, you can definitely go to better than stock cooling on your own. Having said that, it really isn’t that bad for an enclosure of this size as fans do tend to struggle to move air around such a big space.

As it stands, the Cooler Master HAF X isn’t a noisy enclosure. And that may be due to the case fan selection which made a balance between heat and noise. Chances are that you’ll hear the components inside due to its cavernous size. Just pick quieter performance components or different fans to suit your needs. The case definitely has the potential to make your friends envious and the customization options will please more adventurous types and their Dremel tools.