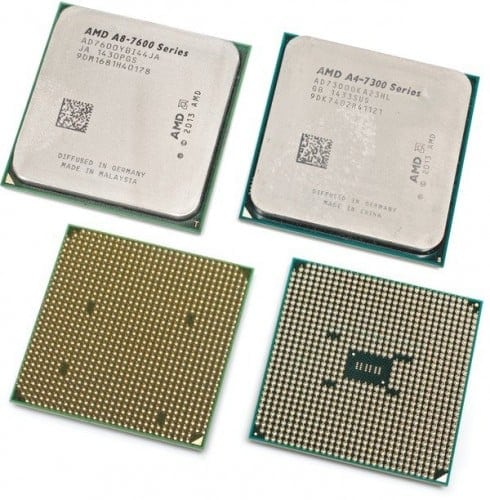 It’s true that AMD’s CPUs haven’t really made an impact on the news lately. While their GPUs have been seeing an uptick in sales due to the woes of NVIDIA and their GTX 970 “memory-gate” issues, it’s been very quiet on the processor front in terms of new products actually hitting the streets, and making people go nuts. Well, today’s story will make customers go nuts, but not in a good way.

According to Computerbase.de (German), AMD has a problem. A fake CPU problem.

Not since early 2000, has there been a real threat of counterfeit or fake CPUs from any manufacturer. But it appears that the blackmarket has opened up again on Amazon. According to WCCF Tech, one of the reports states that a customer ordered one of AMD’s APUs, an A8-7600, and instead, received a circa 2007 -2009, Athlon 64 X2 5200 instead. Even worse, this CPU uses an entirely different socket (AM2), and if installed and powered up, could lead to serious damage.

Because the parts have the proper heatspreader on top, with a much older processor inside, it’s almost impossible to tell if the product is fake or not on first glance. You have to flip the chip over, and inspect the pins (see photo above), to see if it’s really genuine. FM2+ and AM2 sockets should not fit one another, so if you’re having problems installing your CPU, you should probably back away, and have a quick look, and then contact the retailer and Amazon.

The deception is so intricate, it gets right down to the retail boxed hologram, in terms of detail. AMD does have some tips on spotting a fraud through their security measures though. But if the ruse is detailed enough, it might not be enough.

So what’s the take away? If you’re shopping for something important like a CPU, it’s worth it to buy it from a trusted retailer. We often shop at NCIX and NewEgg, but there are reputable companies on Amazon as well. Just check the ratings and make sure they take care of their customers. It’s possible even the retailers might be a victim of this scam, so give them every opportunity to help you out.